The global hookah mixes market is projected to register a CAGR of 4.25% and reach a value of USD 964.45 million by 2028. Hookah tobacco is an intoxicant substance that contains washed or unwashed tobacco as a base ingredient. It is filled in water pipe apparatus containing additives such as water, glycerin, and aromatic molasses sugar. There are several flavors available in the market which include fruit, cotton candy, mint, chocolate, and among others. Hookah mixes come in both tobacco-based and non-tobacco-based.

The outbreak of COVID-19 has resulted in lockdowns across regions, border restrictions, and the breakdown of transportation networks. The economic uncertainty due to the COVID-19 outbreak is much higher than past outbreaks such as severe acute respiratory syndrome (SARS), avian flu, swine flu, bird flu, and Ebola, owing to the escalating number of infected people and the uncertainty about the end of the crisis.

With the outbreak, there was a spike in essential goods such as sanitizers and masks, as customers stocked up household essentials like toilet paper and bread. Most of the customer's budget was shifted to essential goods, and a major downfall in non-essential businesses was observed. As more cities went into lockdown, non-essential businesses were ordered to remain closed during the first half of the pandemic. Hookah mixes being a non-essential product, the demand for the same was affected noticeably during the early stages. The COVID-19 pandemic has severely impacted the tourism industry with border restrictions and government orders for lockdown, forcing people to stay home. Schools, colleges, and institutions were shut down, and corporates across the globe were observed working from home. The COVID-19 pandemic has also impacted the purchasing power of consumers and led to a shift of purchases from wants to needs.

The global hookah mixes market is projected to register a CAGR of 4.25% during the forecasted period. The increasing popularity of cigarette alternative products is the major factor driving the market growth. The increasing number of hookah bars, lounges, and pubs further boosts the sales of hookah mixes in the market. Continuous demand for new flavors and growth of the organized retail sector in Asia-Pacific are expected to create new opportunities for active vendors in the global market. However, the regulatory framework is the major restraint on the growth of the market.


Alternative cigarette products, including e-cigarettes, smokeless tobacco, and hookah, have increased in popularity across various regions. The increasing number of people opting to quit smoking cigarettes owing to their health hazards is driving the growth of alternative products. According to the Centers for Disease Control and Prevention (CDC), smoking cigarettes affects the respiratory system, the circulatory system, the reproductive system, the skin, and the eyes, and it increases the risk of many different cancers. The increasing number of campaigns and advertisements on reducing the consumption of cigarettes has been identified to boost the sales of cigarette alternatives. To promote good health and reduce the global risk of cancer, governments across the globe are also taking initiatives to reduce cigarette smoking.


The tobacco industry is highly regulated. Vendors who are active in the market are expected to comply with numerous regulations that vary from one regional market to another. Increasing concerns about health risks associated with tobacco consumption have encouraged the governments of various countries to implement a certain set of rules that need to be followed strictly to sell their product. Tobacco production, trade, and labeling requirements are stringently regulated by government bodies, including FDA in the US, European Commission in Europe, China National Tobacco Corporation in China, and others. These government regulatory bodies check the trade, production, and other requirements of tobacco in these regions thoroughly. Labeling and other stated specifications need to be followed by the manufacturers to get approval from the government to be circulated in the market. However, there is a regulatory gap in the hookah market which complicates the smooth functioning of the market. Laws and regulations regulating the use of hookahs in public places vary from country to country, state to state as well as from community to community. Hookah bars and cafes are exempted from smoke-free air laws in many communities. Many countries have put a ban on public smoking, including hookah smoking.


The surging demand for new flavors is a long-term opportunity for market players to focus their R&D activities on innovation. The changing lifestyle patterns and eating habits of consumers and a desire for variety result in continuously shifting consumer preferences. To meet the changing preferences of consumers, hookah mixes manufacturers are focusing on introducing new product flavors, thereby sustaining their position in the global market. Fruit flavors remain constant favorites, including citrus notes. Apple, grape, and lemon flavors are also popular among hookah smokers. With the growing demand for new and fruit-based flavors, market players are starting to introduce variations in their product portfolios. For instance, quickly growing in popularity throughout the US, Adalya Tobacco, in October 2020, launched seven new hookah shisha blends featuring fruit flavors. Manufacturers are also focusing on organic, herbal, and nicotine-free hookah flavors with a rising trend of non-tobacco-based hookah mixes.

Based on flavor type, the global hookah mixes market has been segmented into fruit, cotton candy, mint, chocolate, blends, and others. The blends segment accounted for a larger market share of 40.82% in 2020 whereas, the fruit segment is projected to record the highest CAGR of 4.54% during the forecast period.

Based on end use, the global hookah mixes market has been segmented into bars & pubs, and households. The bars & pubs segment accounted for the largest market share of 76.26% in 2020 whereas, the household segment is projected to record the highest CAGR of 4.40% during the forecast period. 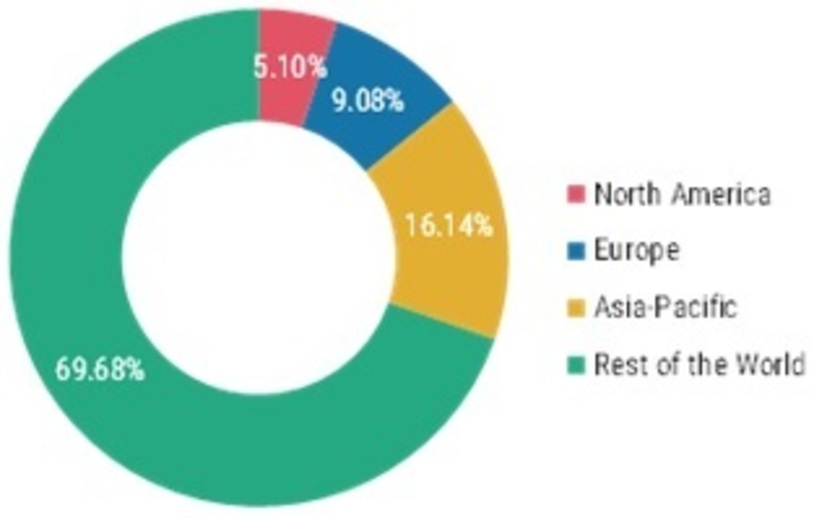 The Rest of the World (RoW) consists of South America, the Middle East, and Africa. The regional market accounted for the largest market share of 69.68% in 2020 and is projected to register a CAGR of 4.23% during the forecast period. The Middle East holds the largest market share in the year 2020 and is projected to be the same for the forecast period. The consumption rate of hookah is higher in Middle Eastern countries such as the United Arab Emirates, Kuwait, and Saudi Arabia. In these countries, water pipe (hookah) smoking is prevalent among the general population. The prevalence of hookah consumption has increased over the past few years in Iran as well.  The growing introduction of decorated pipes and a wide range of flavors of hookah has attracted many consumers.

Asia-Pacific is a lucrative region for the manufacturers of hookah mixes. It accounted for a 16.14% market share in the global hookah mixes market. The market in the region is projected to expand at a CAGR of 4.54% during the forecast period. India is believed to be one of the first places where hookah was used. India's market has gained immense popularity for hookah in recent years. The number of bars, pubs, and restaurants offering tobacco-free or flavored hookah to youth without any regulation has increased. Moreover, the number of hookah lounges, bars, or cafés offering especially hookah, has significantly increased in almost all major cities in the region.

What is the valuation of the Hookah Mixes Market?

Name the notable players of the Hookah Mixes Market?

Which region can dominate the Hookah Mixes Market?

The global hookah mixes market is projected to record a CAGR of 4.25% during the forecast period ...