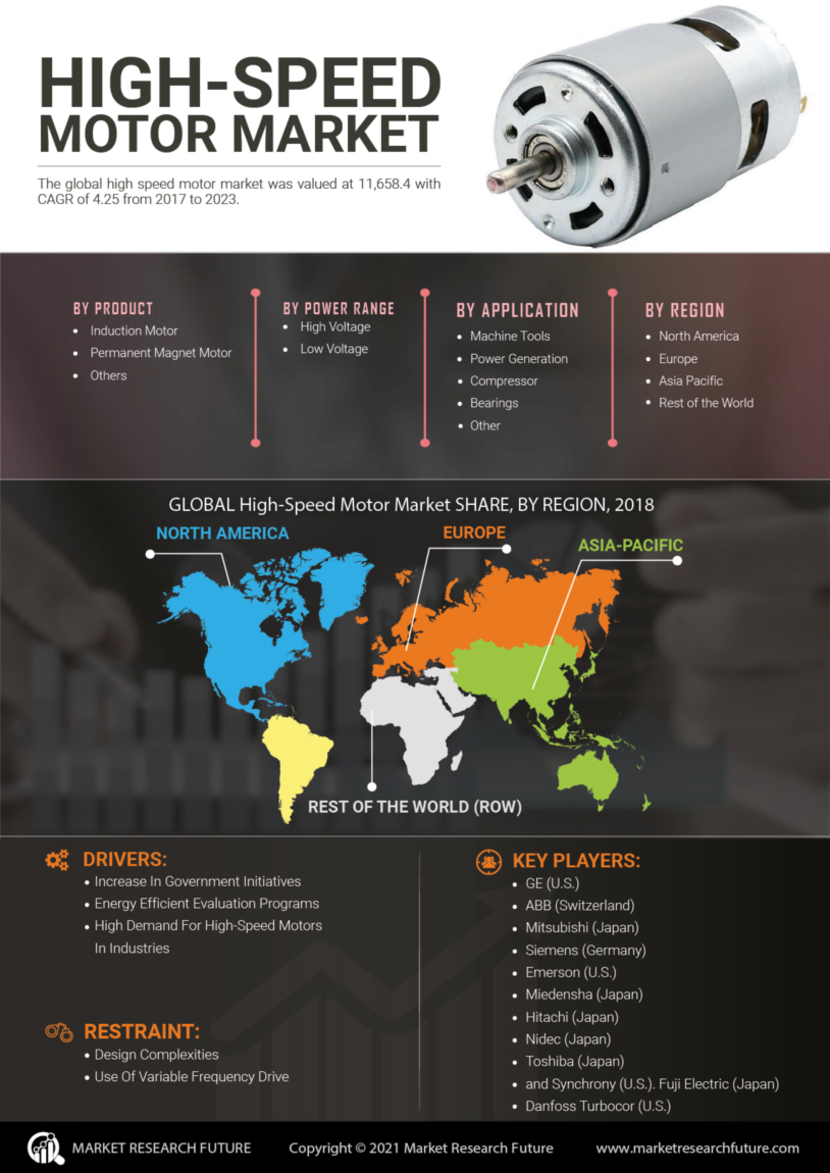 High speed motors achieve a rotational speed of over 10,000 rpm. The power density of the motor is high due to the high speed and the power voltage is also comparatively less as compared to other medium speed motors. The major use of high speed motor is to ensure transmission at a higher rate with lower noise generation. Due to the high speed of the motor there is small inertia generation which results in faster dynamic response. There are various government regulations that have been developed to increase the efficiency of motor and reduce energy consumption. In 2016, the global high speed motor market was valued at 11,658.4 with CAGR of 4.25 from 2017 to 2023.

The growth of the high speed motors market is majorly driven by increased government initiative, energy efficient evaluation programs, and high demand for high speed motor in industries. The government have taken various initiatives to increase the efficiency of the high speed motor. According to Office of Energy Efficiency & Renewable Energy, there has been increased in the investment of up to USD 25 million. The investment is major for developing advance technologies for energy-efficient electric motor. The department of energy has planned to take eight to twelve projects by Next Generation of Electric Machines that will enable to create fund opportunity. There have been various programs developed to improve the energy efficiency of the motor.  In 2004, The Navy Technology Validation Program (Navy Techval) had been developed to identify the technologies that will provide high energy efficiency. In 2012, The U.S. General Services Administration (GSA) had conducted a program that assess the benefits of using magnetic bearing chiller compressors. The assessment has resulted in increased energy of high speed motor by 49%. The increased benefits provided by magnetic bearing will result in growing demand for installation of magnetic bearing in high speed motor. This will result in the growth of the market during the forecast period. However, the design complexity is major restraining factor for high speed motor because the construction of high speed motor requires high quality element. If cheaper alternative products are used in the construction of high speed motor, than the motor might get damaged. 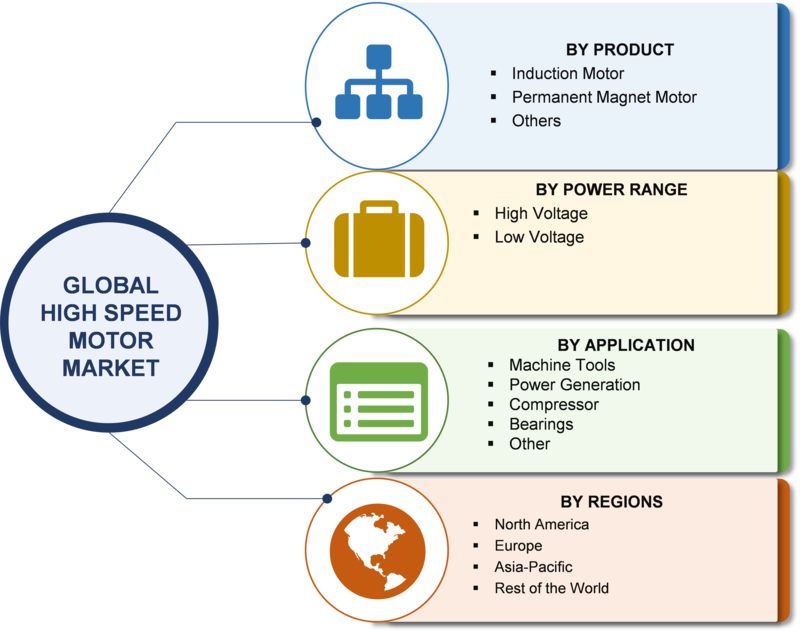 Geographically, the global High speed motor market has been divided into four major regions such as North America, Europe, Asia Pacific and Rest of the World. Asia Pacific has dominated the high speed motor market due to growing industrial sector. The government is seeking development in infrastructure due to which there will be immense scope for the growth of high speed motor. The government has taken various investment initiative to increase the efficiency of the motor. The rapid rising commercial development with favorable policies developed by the government regarding FDI, is expected to increase the demand for high speed motor. Additionally with government initiative in the form of ‘Make in India”, the scope of growth and development for the high-speed motor market in the Asia-Pacific region is immense during the forecast. Europe is the second largest market that is expected to grow due to high contribution from countries such as Germany, U.K. and France. The existence of an established manufacturing sector in this region provides additional scope of growth for the manufacturers in the market. Additionally, with the currently booming automotive industry in the Europe region the market for high-speed motors will flourish. North America is the third largest market that is expected to grow due to the presence of leading manufacturers with high investment in research and development. The increased investment in research and development will result in high innovation in products, which meets government standards. This will result in the growth of the market during the forecast period.

The report for Global High Speed Motor Market of Market Research Future comprises extensive primary research along with the detailed analysis of qualitative as well as quantitative aspects by various industry experts, key opinion leaders to gain the deeper insight of the market and industry performance. The report gives the clear picture of current market scenario which includes historical and projected market size in terms of value and volume, technological advancement, macro economical and governing factors in the market. The report provides details information and strategies of the top key players in the industry. The report also gives a broad study of the different market segments and regions.

At what CAGR can the high-speed motor market surge?

What is the estimated valuation for the high-speed motor market?

The global market of high-speed motors can cause the market to value above USD 11000 by 2023.

Who are key players of the high-speed motor market?

What are the high-speed motor market drivers?

What is the regional analysis of the high-speed motor market?

Increase in industries can cause the high-speed motor market to surge in APAC.

What are the areas of applications of high-speed motor?

What are the types of high-speed motor?