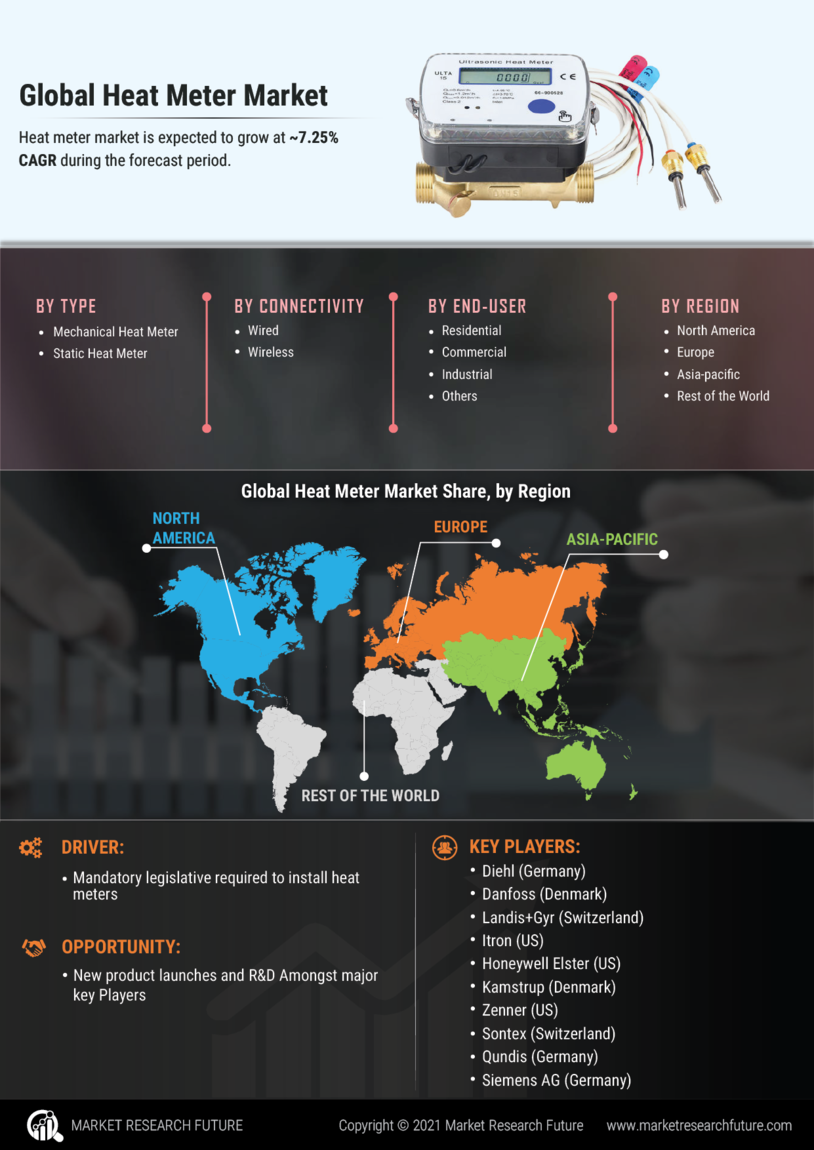 Heat meter market is expected to grow at ~7.25% CAGR during the forecast period.

A heat meter is a device that measures the flow rate of a heat transfer fluid to determine the amount of thermal energy given by a source. It is commonly used to measure boiler output in facilities. It is also used to determine how much heat or cold a heating boiler or chiller unit produces. A heat meter's primary role is to give data for billing and optimization. Heat meters work under a legal and regulatory framework that is required for their installation. During the projected period, the residential segment is expected to dominate the heat meter market. The global market is expected to grow at a rapid pace over the forecast period.

Because the systems are mostly centered on energy efficiency, the global market is predicted to increase significantly throughout the forecast period. The Asia-Pacific region is likely to see increased manufacturing, while its reliance on energy imports grows. As a result, there will be a demand for heat meters to save energy. Similarly, North America, as the world's second-largest economy, is focusing on energy conservation measures, including the use of heat meters in a variety of applications. Furthermore, the worldwide heat meter market is expected to increase significantly, primarily in areas where heat conservation is a major concern, such as several developing economies.

Global Heat meter market is expected to witness substantial growth during the forecast period, as the systems are mainly based energy efficiency. Asia-Pacific is expected to foresee increasing manufacturing, meanwhile its dependency on energy imports is growing. Hence, the demand for heat meter will be needed for conserving the energy being consumed. Similarly, North America being the second largest economy is also focusing towards energy conservation programs by implementing heat meters within different application areas.

Low-carbon district heating with greater flexibility, according to International Energy Efficiency, can decarbonize heating in buildings by installing heat meters.

Factors contributing to the increase include the need for precise heat consumption assessment, a statutory necessity to install heat meters, and higher savings through heat conservation. Static meters are employed in building technology and automation, as well as district heating, and come in a variety of flow rates. Static meters also rely on the fluidic oscillator theory to provide accurate flow and energy readings.

Heat meter is a device used for measuring thermal energy provided by a source by measuring the flow rate of the heat transfer fluid. It is generally used in the plants for measuring boiler output. It is also used to measure the heat or cooling output of a heating boiler and chiller unit respectively. The major function of a heat meter is to provide a data needed for billing and optimization. Heat meter functions with certain legislative and regulatory framework needed for installation of heat meter. Residential segment is estimated to dominate the heat meter market during the forecast period. Moreover, it is estimated that there will be a substantial growth of the global market mostly in the economies where heat conservation is a major concern including some of the developing economies.

Mandatory legislative required to install heat meters has become the major driver for the growth of the global heat meter market. Additionally, governments around the globe are developing policies to encourage the use of heat conservation, due to energy import that is being taken place in many developing economies. According to International Energy Efficiency, low-carbon district heating providing greater flexibility can decarbonize heating in buildings by deploying heat meters.

Static segment is becoming popular with users as these meters use fluidic oscillator principle for providing reliable flow and energy readings. On the other hand, mechanical heat meter is a compact device to measure heating and cooling energy in major application areas. However, mechanical meters are not suitable for liquids with suspended solids as these can cause either wear or build-up on the meter requiring high level of maintenance.

The global heat meter market is projected to grow at a high rate during the forecast period, mainly due to the growing demand accurate measurement of heat consumption and increased savings through heat conservation, which further drives the growth of the global market, globally. 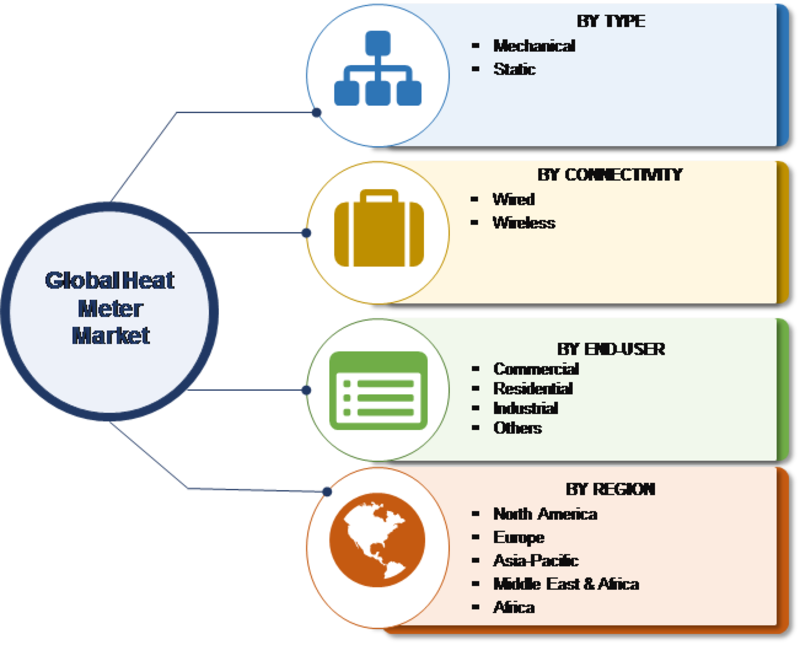 Global Heat meter market has been segmented based on type, connectivity, end- user, and region. Based on type, the market is classified into mechanical and static. Static segment is expected to grow at the fastest rate as these meters use fluidic oscillator principle for providing reliable flow and energy readings.

Based on connectivity, the market is segmented as wired and wireless. Wired heat meter is estimated to dominate the market due to increased adoption of wired meters in poor connectivity areas where residential buildings are connected with district heating.

The global Heat meter market is further segmented based on end-user, including residential, industrial, commercial, and other segments. Commercial segment of the global market is estimated to register the highest market share during the forecast period.

What is the main driver of the market?

Mandatory legislative required to install heat meters is the major driver for the growth of the global heat meter market.

At what CAGR, the market is growing?

Mention the top players of the market.

Asia-Pacific to foresee increasing growth value and impact on the market.

Which segment is to register the highest market share in future?

Commercial segment of the global Heat meter market is to register the highest market share during the forecast period.