Hard Disk Market Research Report Information By Type (SSD, HDD, and HHD), By Application (Personal Use, Commercial Use, Government, and Others), and By Region (North America, Europe, Asia-Pacific, and Rest Of The World) - Forecast Till 2030. Hard Disk Market Size was valued at USD 52.2 billion in 2021. The hard disk market industry is projected to grow from USD 55.1 billion in 2022 to USD 80.6 billion by 2030, exhibiting a compound annual growth rate (CAGR) of 5.60% during the forecast period (2022 - 2030). The primary market driver for the expansion is the increase in demand for storage in big data and cloud-based applications. 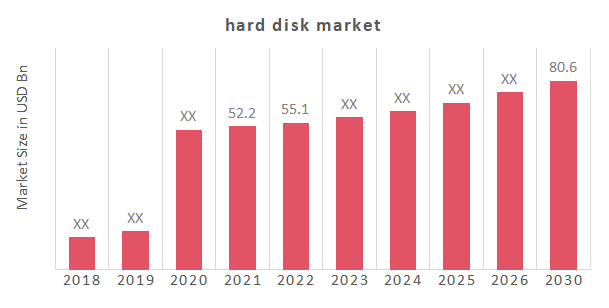 
As per market dynamics, the need for hard disk is driven by the rising adoption of electric devices in consumers' daily lives. The development of smart, connected technologies is boosting the demand for storage drives to store different data types. Therefore, the recent shift in technology trends in the consumer electronics industry is also anticipated to help the expansion of the market for hard disk. The Consumer Technology Association (CTA) predicts that the U.S. consumer technology sector will produce more than USD 505 billion in retail sales revenue in 2022. The American company is also anticipated to supply over 100 consumer tech items and complementary software and services. As more people have access to high-speed internet, even those living in rural places may now use the internet, which is crucial to expanding the intelligent consumer electronics business. The International Telecommunication Union estimates that 63% of the world's population, or around 4.9 billion people, will be online in 2021. These trends have considerably fueled the desire for wearable technology, laptops, and smartphones. In the European region, for instance, there will be over 276 million 5G connections by the end of 2025, with the Nordics and Western Europe registering the greatest adoption rates. Thus, this factor is driving the market CAGR for hard disk.

Additionally, the usage of cloud storage and other enterprise applications has increased, which is projected to open the door for expanding the hard disk market. Additionally, it's anticipated that the constant sales of laptops will significantly boost the shipments and sales of hard diskmar in the coming years. These drives support the computer's boot process and the storage of personal and application software. Hard disk drives are inexpensive and useful for storing a substantial amount of business files, films, and images. Several businesses' increased demand for high-capacity, affordably priced drives will probably broaden the hard disk market's potential for growth.

However, the widespread adoption of work-from-home policies during the pandemic has boosted demand for PCs and other remote work systems in the short term, but it has also fueled demand for data centers that support cloud-based and remote work, which in turn will drive demand for hard disk for primary storage throughout 2020. So, it is anticipated that this aspect will accelerate hard disk market revenue globally.

The hard disk market segmentation, based on type, is SSD, HDD and HHD. The HDD segment dominated the hard disk market data in 2021 and is projected to be the faster-growing segment during the forecast period, 2022-2030. Since HDDs are less expensive than SSDs, there is a bigger demand for them and they are widely used in personal computers and data centers.

For instance, Microsoft Corporation declared that it would stop supporting the Windows 7 operating system by the year 2020.

The market, based on category, is segmented into personal use, commercial use, government and others. The personal use segment dominated the hard disk market revenue in 2021 and is projected to be the faster-growing segment during the forecast period, 2022-2030 This is a result of customers' rising desire for storage devices to store the data produced by digital activities like photography, videography, and music. Hence, this would have a positive impacts market growth for hard disk.

On the other hand, due to increased business operations across numerous sectors, including IT, BFSI (banking, financial services), and telecom, the commercial use segment is anticipated to see a high CAGR over the course of the projected period. Additionally, as cloud computing services are increasingly employed by businesses worldwide, there is a growing demand for hard disk with enormous storage capacities.

By region, the study provides the market insights into North America, Europe, Asia-Pacific, and the Rest of the World. As per market statistics, the Asia Pacific hard disk market accounted for USD 25.3 billion in 2021 and is expected to exhibit a 48.50% CAGR during the study period. Due to rising demand from data centers and cloud computing providers for high-performance storage devices, the area is anticipated to maintain its dominance over the projected period. As per market forecast, it is projected that growing investments by businesses like Western Digital and Seagate would fuel regional market expansion for hard disk market.

Major market players are spending a lot on R&D to increase their product lines, which will help the hard disk industry grow even more. Market participants are also taking various strategic initiatives to grow their worldwide footprint, including new product launches, contractual agreements, mergers and acquisitions, increased investments, market developments, and collaboration with other organizations. According to the market competitive landscape, players in the industry must offer cost-effective items to expand and survive in an increasingly competitive and rising market industry.

American data storage firm Seagate Technology Holdings plc. It was founded in 1978 under the name Shugart Technology and opened for business in 1979. With its operational headquarters in Fremont, California, the company has been incorporated in Dublin, Ireland, since 2010. In August 2019, the newest addition to Seagate's renowned range of gaming storage, the Game Drive for Xbox Gears 5 Special Edition, was made available in collaboration with Microsoft and The Coalition.

Also, a Japanese conglomerate corporation with its headquarters in Minato, Tokyo, Japan, Sony Group Corporation is frequently abbreviated as SONY. As a significant player in the technology industry, it serves as one of the biggest consumer and business electronics producers, the biggest console maker, and the biggest publisher of video games. In April 2019, the high-performance SL-M series and the conventionally small SL-C series are two brand-new external SSD drives from Sony. Faster workflow is possible when processing, editing, duplicating, and storing data thanks to high-speed SL-M and SL-C.

Key Companies in the hard disk market include

October 2020: A well-known American data storage business, Seagate Technology plc, announced that it will begin distributing its 18TB SkyHawk Artificial Intelligence (AI) drives in large quantities. This drive is the first of its kind specifically designed as a hard disk for surveillance systems using artificial intelligence (AI), allowing for quicker and wiser choices. Applications using ImagePerfectAI with Edge are encouraged to use machine learning and deep learning workload streams thanks to this new SkyHawk AI drive.

January 2019: The 16TB Conventional Magnetic Recording (CMR) HDD with the biggest capacity in the market was unveiled by Toshiba Electronic Devices & Storage Corporation. The MG08 16TB drives have 14% more capacity than the previous 14TB models and 33% more capacity than today's most popular 12TB drives. They are compatible with the widest range of operating systems and applications, and they are used to mixed random and sequential read and write workloads in both cloud and conventional data centre environments.

How much is the hard disk market?

What is the growth rate of the hard disk market?

The market for hard disk is expected to register a CAGR of ~5.60% over the next ten years.

Which region held the largest market share in the hard disk market?

Who are the key players in the hard disk market?

The HDD category led the type segment in the hard disk market.

Which application had the largest market share in the hard disk market?

Personal use category had the largest market share in the market for hard disk.