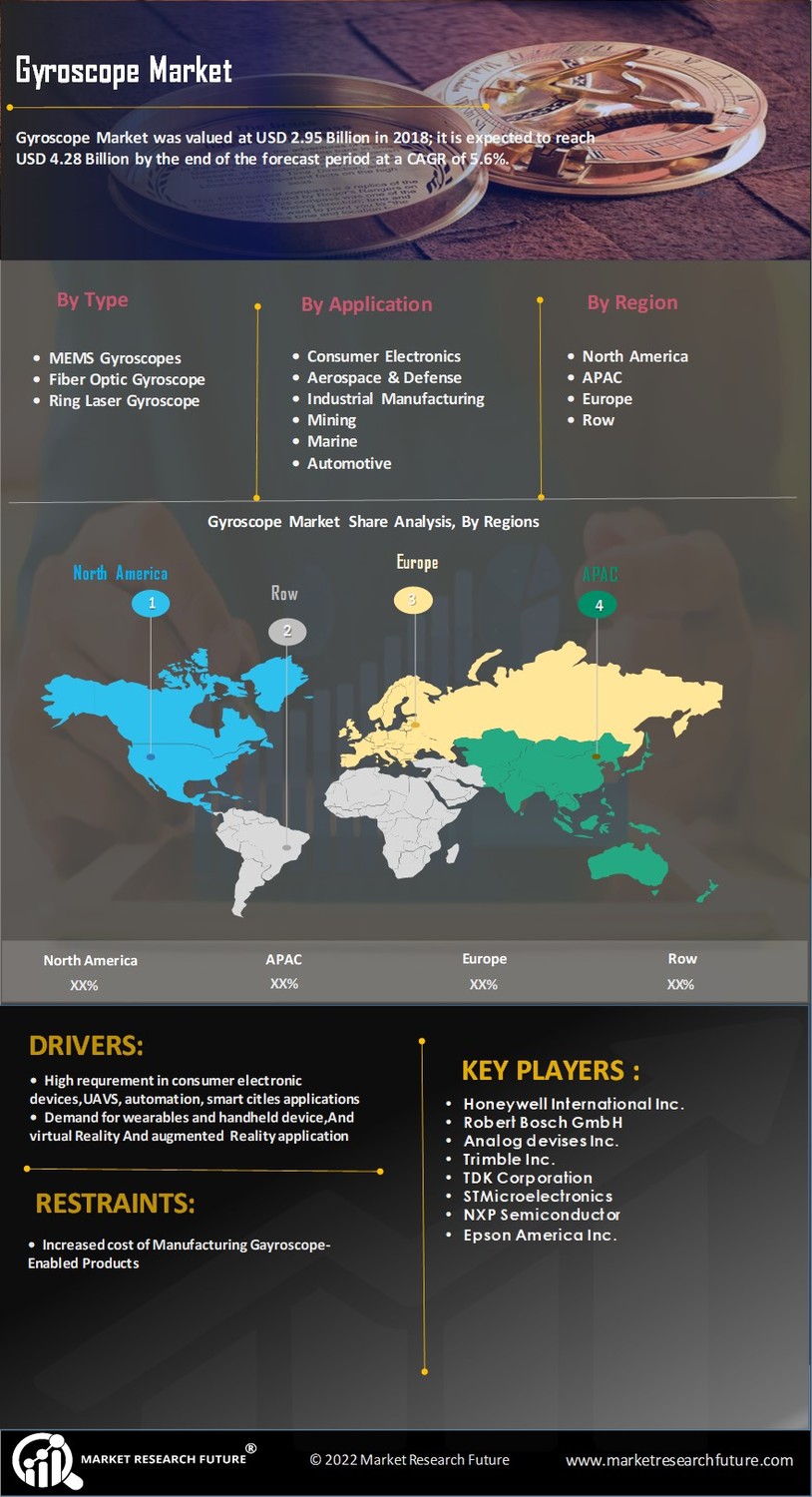 Gyroscope Market was valued at USD 2.95 Billion in 2018; it is expected to reach USD 3.23 billion by the end of the forecast period at a CAGR of 4.44%. A gyroscope is an instrument or a sensor that keeps track of an object's orientation and angular velocity. Gyroscopes are becoming more common as demand for them grows in consumer electronic products, unmanned aerial vehicles (UAVs), automation, smart city applications, and the commercial infrastructure market. Gyroscopes capture data more accurately and automatically, with fewer inaccuracies in the information recorded. Consumer electronics, aerospace & military, industrial manufacturing, mining, marine, automotive, and other end-users are quickly incorporating gyroscopes into their automation processes to enhance production frequency without sacrificing quality. To measure data pointers on every operational phase, the automation process necessitates the usage of various sensors. One of the most widely used sensors is the MEMS gyroscope. These sensors aid in improving the precision and accuracy of motion detection. Trends such as increased worldwide vehicle production, the introduction of unmanned aerial vehicles, expanding demand for wearables and mobile devices, and developing virtual reality and augmented reality applications are all affecting the gyroscope industry and Gyroscope Market Outlook.

The ongoing COVID-19 pandemic has had a toll on the gyroscope business. Due to huge disruptions in supply chain movement and government-imposed lockdowns around the world, the market's growth has slowed noticeably, particularly in the automotive and consumer sectors. However, it has the potential to grow, particularly in the wearable industry. Smart wearables are frequently used to provide information about a person's health. Oura, a smart ring startup, is collaborating with the University of California, San Francisco to develop smart rings that can be used to track things like body temperature and conduct a daily system survey. It will allow users to discover COVID-19 at an early stage. This ring has infrared LEDs, three temperature sensors, an accelerometer, and a gyroscope, and it can detect vitals like breathing rate and heart rate through the finger.

The Gyroscope Market Size and Gyroscope Market Share are primarily driven by rising defense spending, while the overall market is primarily driven by factors such as high demand from the consumer electronics industry, stringent government regulations for the automotive industry, the emergence of efficient, economical, and compact MEMS technology, growing adoption of automation in industries and homes, and rising demand from emerging economies. The increasing use of gyroscopes in smartphones and handheld devices, as well as the expanding deployment of unmanned aerial vehicles (UAVs) for surveillance, mining, and military applications, are two important reasons driving market expansion.

The rising cost of producing gyroscope-enabled gadgets may stifle Gyroscope Market Demand and change the Gyroscope Market Outlook. Gyroscopes are used in navigation systems for unmanned aerial vehicles, spacecraft, surface vehicles, and maritime applications. Increasing production costs and complexity, on the other hand, may limit the worldwide gyroscope market share over the projection period. Low precision is a stumbling block to its expansion.

As a result of increased market investment, technical improvements are resulting in improved performance and cheaper prices. This is driving market expansion by growing the demand for gyroscope systems in a variety of sectors. Gyroscopes are normally sensors that are used to measure orientation in a variety of devices. Gyroscopes have come a long way since their origin, thanks to gradual technological advancements. As a result, they have become one of the most important components of navigation systems. MEMS gyroscopes, fiber optic gyroscopes (FOG), ring laser gyroscopes (RLG), hemispherical resonator gyroscopes (HRG), dynamically tuned gyroscopes (DTG), and other technologies are the many types of gyroscopes.

Asia-Pacific is the top region in terms of adoption and manufacturing among the countries mentioned above. The usage of gyroscopes in military, aviation, and consumer electronics applications is driving up demand in China, India, South Korea, and Japan. In terms of market share, North America is closely followed by Asia-Pacific due to the presence of various Gyroscope Market Key Players. Some of the largest producers are based in the United States, which gives them more clout in meeting client demands and, as a result, aiding the market growth. Furthermore, the defense and aviation sectors in the North American region are rapidly evolving. Gyroscopes have now become a vital component of systems for self-driving automobiles and autonomous vehicles to maintain stability and achieve precise results, which is a crucial necessity. The global gyroscope market is expected to increase steadily in Europe throughout the projected period. Increased expansion in the automotive and avionics industries is contributing to the region's worldwide gyroscope market growth. However, due to increased development in the avionics and automotive industries, Europe is predicted to have the strongest growth rate during the projection period. The worldwide gyroscope market is expected to grow steadily in MEA and South America throughout the projected period.

The presence of various global vendors characterizes the global gyroscope industry. The existing players are competing for market share in a relatively fierce manner. Cost, quality, accuracy, and product reliability are just a few of the elements that help suppliers stay afloat in a highly competitive industry. Furthermore, technological advances for gyroscope use across various markets are likely to propel the gyroscope market forward throughout the forecast period. Based on their place of origin, presence, recent key innovations, product diversification, and industry experience, the key players in the gyroscope market are identified across all major regions. These players make a substantial contribution to market expansion. Apart from the top major companies, the gyroscope market is dominated by the other players, who account for about 25%–30% of the market. The major Gyroscope Market Key Players are as follows:

The study examines the global Gyroscope Market in-depth to identify the most promising investment opportunities. To establish the entire market picture, current patterns and future projections are discussed. The paper gives information on major drivers, restrictions, and opportunities with full impact analysis. The market is divided into five regions. Furthermore, the market's growth is hampered by the extremely complex manufacturing process and demanding cycle time, as well as capital-intensive applications. However, factors such as rising demand for wearable electronics, IoT commercialization, the introduction of advanced consumer applications, rising demand for unmanned vehicles, and increased fleet size in commercialization aviation could create significant opportunities shortly for this market. The study also provides a thorough analysis of the market. The report accomplishes this through in-depth qualitative insights, historical data, and credible market size predictions. The research's estimates are based on a well-established research methodology and assumptions.

What is expected to be the rate of growth of the gyroscope market during the assessment period?

The gyroscope market is poised to register 4.44% CAGR.

What is expected to be the market size by the end of 2030?

What are the major drivers of the gyroscope market?

By application, which segments are profiled in the study of gyroscope market?

By application, the segments of the gyroscope market are consumer electronics, industrial manufacturing, aerospace & defense, mining, automotive, marine, and others.

By type, which segments are profiled in the study of gyroscope market?