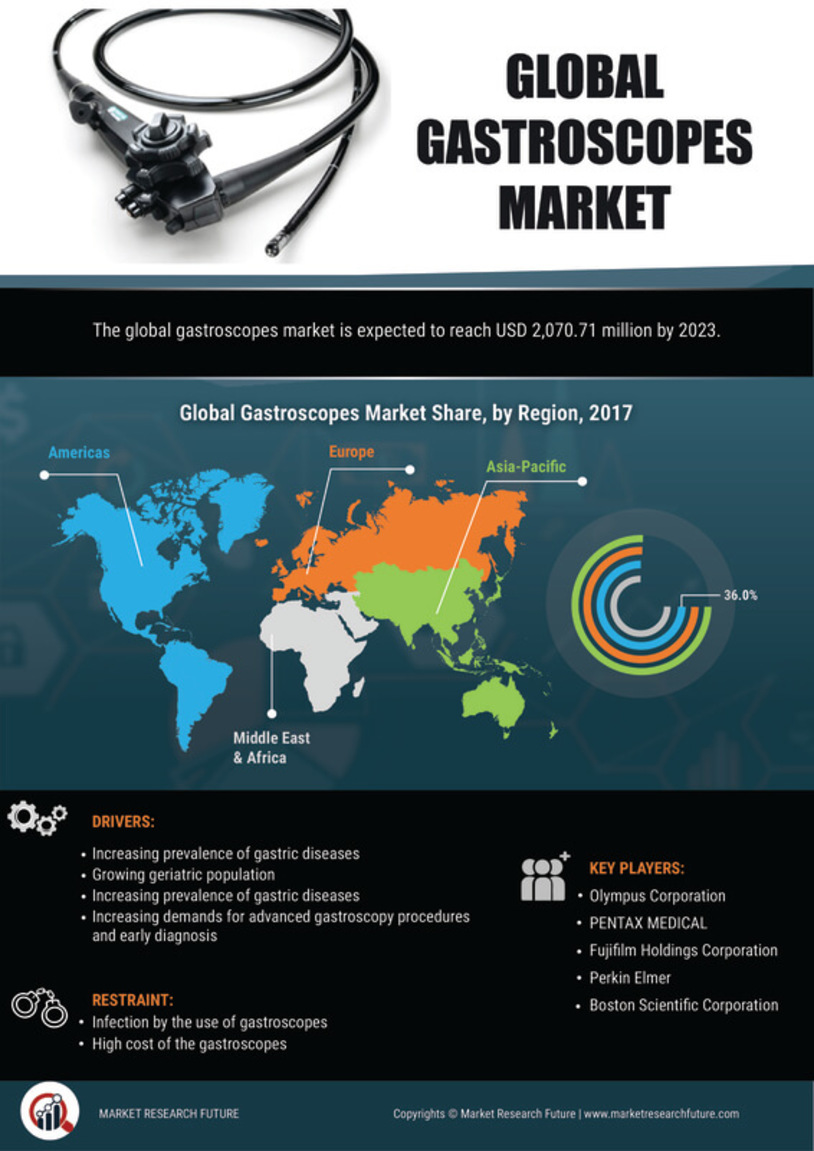 While it is expected that the Gastroscopes market size will reach 6.9% CAGR, this would ensure that it reaches USD 2,070.71 million by 2023. The procedure that includes using a flexible tube to examine a human body's internal organs, including the stomach, small intestine, and esophagus, is termed gastroscopy. This procedure is also helpful in examing the internal layer of the gastrointestinal tract. The procedure is also used to fetch the samples for biopsy to diagnose many diseases.

The driving force behind the gastroscopes market share is that gastric diseases in individuals have been increasing each day, and the demand for getting the diagnosis done at the early stages is also on the rise. On the other hand, the factors restricting the market's growth are the higher cost involved and the chances of the person getting infected with the tube.

COVID 19 times has not been easy for anyone across the globe. Every business had to face difficult times economically and physically. With the recovery of a trillion of dollars which is the global economic downturn, it is estimated that its recovery would take almost a year. While each business is desperately willing to end this period of recession, they, on the other hand, are looking for the right type of guidance on how to achieve their goals.

A proper strategical approach is required to overcome this difficult time, and appropriate insights from the reports are likely to provide great benefits to all the companies.

While every business, big or small, is trying to look for the current situation and take necessary steps to combat the crisis, the analysts study the market trends. They are all set to guide the companies with the best advice.

While there has been a sharp increase in gastric diseases worldwide, the research has also increased with the increase in the same investment. With data that says that there are almost 4 million people in a year affected by peptic ulcers, there is an estimated incidence of 1.5 to 3 percent. According to a report released by No Stomach for Cancer, Inc., in 2015, gastric cancer is among the top 3 causes of death caused by cancer in the entire world. Hence, with the increase in such cases, steady and fast growth has been seen in the Gastroscopes market size.

The gastroscope market has opened up the doors to early detection of almost all gastrointestinal issues. With this, it has started to gain popularity even though the procedures involved are very expensive. There are few reasons behind it. First is the increasing geriatric population, which means the people with a higher age group are most likely to suffer from one of the other gastrointestinal issues. Secondly, even in the younger population globally, gastric diseases have seen a steep rise due to bad eating habits. Also, because there has been rising awareness towards minimally invasive procedures rather than invasive surgeries, the gastroscopes market share has taken a front foot among non-invasive procedures. Technological advancements have only been possible because of the increasing demand. As they say, every business flourishes on the demand chain supply.

It can be reviewed as follows:

The gastroscopes market type is divided regionally into the Americas, Asia-Pacific, Middle East, Europe, and Africa. The gastroscope market in America has a much higher scope for the market due to advancements in detection technologies for all gastrointestinal-related issues.

The European market is expected to be the second-largest in the world during the forecast period. Disorders like esophageal cancer, Barrett's esophagus, and inflammatory bowel disease have shown a prevalence in the population in the last few years. This has boosted the market in the European countries.

The fastest-growing market in the Asia Pacific market, with an increasing number of inflammatory bowel disease cases (IBD, gastroesophageal reflux disease, colorectal cancer, and Crohn's disease (CD) is the gastroscopes Industry. There has been a rapid increase in the instruments' demand to detect these early in the patients.

The Middle East and African markets have been forecasted to experience a steady increase in the instruments' demand. Because healthcare services are increasing each day, the demand for diagnostic devices is also increasing.

Innovation, strategic planning, product development, and consistency have been some of the key elements that these major players have followed that have made them reach the level where they are today.

Few recent developments in the field of the gastroscope market are:


Report Overview: The gastroscope market type is one of the major markets gaining success with each passing day. The major reason behind its growth is the fact that gastric issues have seen prevalence in people all over the world. With the increasing cases, the demand for diagnostic instruments is also increasing. Pointers included in the report are the following:

What would be the CAGR for the gastroscopes market during the forecast period (2020-2027)?

The market would have a projected CAGR of 6.9% for the forecast period.

What would be the valuation by the end of 2027?

Which region would grow with the fastest-speed during the forecast period?

The Asia Pacific would be the fastest-growing regional market.

Which regional market would lead the gastroscopes market in the coming years?

The Americas have the maximum scope for growth.

Who are the top players involved in the global market?