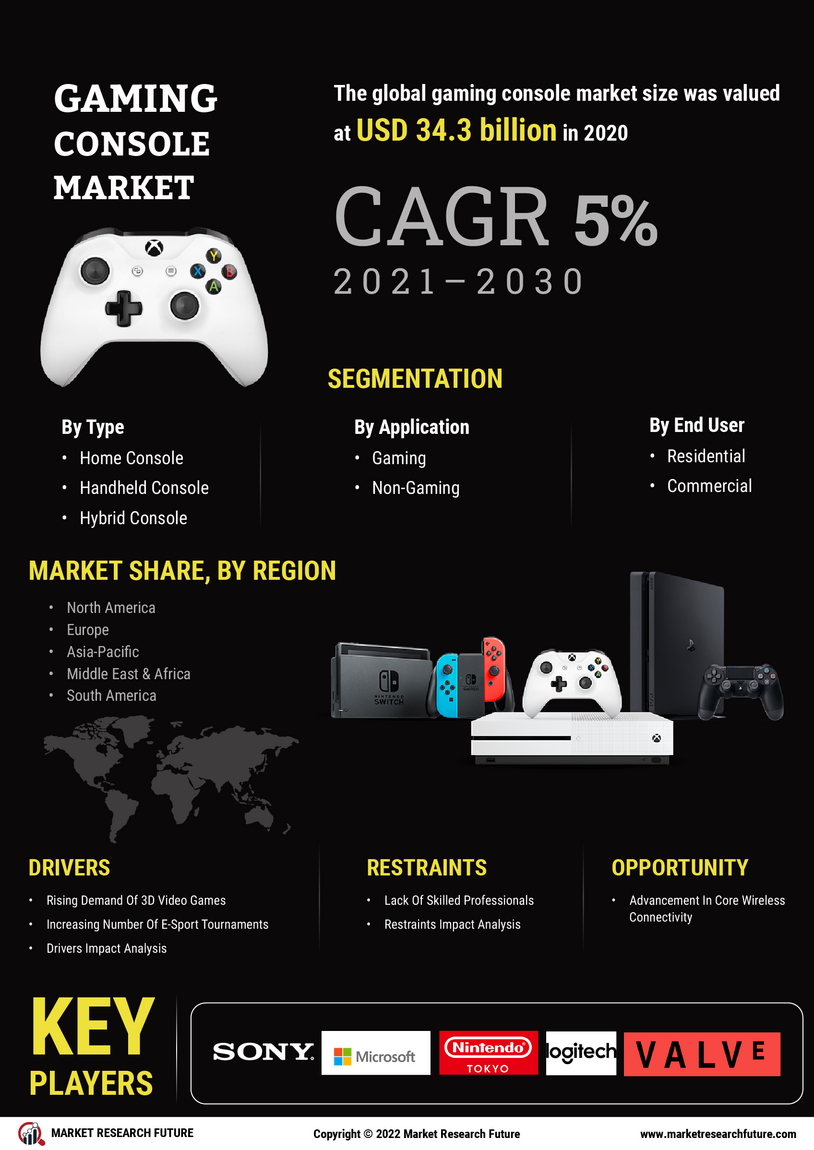 The global gaming console market size is predicted to register a significant CAGR of 5.37% during the forecast period and was valued at USD 34.3 billion in 2020.
Request a Free Sample

The global gaming console market size is predicted to register a significant CAGR of ~5.37% during the forecast period and was valued at USD 34.3 billion in 2020.

A gaming console need a monitor and TV for display. These video game consoles are mainly powered by CPUs and operating systems which differ from a desktop computers. There are three types of gaming consoles: home consoles, hybrid consoles and handheld consoles. The consoles are controlled by their respective manufacturers and the software is outfitted as per the machine’s capabilities. The gaming soles have different benefits over Pcs, such as does not require upgrades, easy to use, generally cheaper, designed for simple multiple players with console owing friends, and offer controllers that give a more active experience to the users. There are many different gaming consoles among which the leading are the PlayStation 4 Pro, PlayStation 5, PlayStation 4, Xbox Series X, Xbox Series S, Xbox One S, and others. The are various features offered by the gaming consoles, out of which the core are: its offers human control interface, hybrid data storage, APU horsepower, low pow consumption, Blu-ray, low price, merged entertainment system, and thin console.

The outbreak of the COVID-19 pandemic has had a negative impact on the global economy as it has impacted various sectors, such as BFSI and IT & telecom, significantly. The pandemic has resulted in the implementation of lockdown restrictions and travel limitations in many countries across the globe, resulting in the disruption of the supply chain of goods and materials and the market demand. Moreover, the limitations on trades, shutting down manufacturing sites, and decline in the production rate, cash flow constraints, and unavailability of workers have led to the fall in the cash flow margins of the stakeholders in the global market. The virus mostly affected SMEs, but large organizations also had significant impacts. The COVID-19 has also impacted the gaming console market across the globe. The pandemic has caused issues over the manufacturing process of these consoles. The travelling and transporting concerns to and from China and in other parts of the region has mainly impacted the production process, as China is the core country in supplying the electronics and other hardware components. Many of the video game developers, and operators has tried to maintain stability in the operations. The work from home concept across the globe has driven the record for online games during the pandemic thereby resulting in creating a more resilient solution for the gaming console market as compare to other industries.

The major factors driving the growth of the gaming console market are the rising demand of 3D video games and increasing number of e-sport tournaments. However, lack of skilled professionals is hindering the market growth. Although, advancement in core wireless connectivity is creating an opportunity in the market.


The popularity for 3D gaming has increased among the juvenile across the globe. The growing disposal income and increase in spending by gamers has influenced the demand for the gaming console market. The innovative marketing strategies adopted by professionals and developers to promote the 3D video games has propelled the gaming console market. Further, the continuous advancement among different companies such as Microsoft and Sony to develop 3D gaming consoles has formed huge demand for the market. Initially, there has been an upgradation in augmented and virtual reality in the development of 3D video games. With this growing technological advancement in the 3D video games, the gaming console market is expected to drive the growth across different regions around the globe. Moreover, growing investment in gaming industry and increasing “MMOGs (massively multiplayer online gaming options)” are expected to fuel the growth of the market.


Despite the growth and rise in the global gaming console market, some factors hinder the market growth rate throughout the world. Lack of skilled and experienced employees in the global market is the major restraining factor responsible for the drawbacks in the market growth. The technical skills among the workforce has resulted in the shortfall of workers required for the gaming consoles. Gaming console development requires highly professional developers and testers as well as infrastructure. The manufacturers often face complications in building consoles thereby hampering the growth of the market.


The gaming industry is evolving and rebuilding with the growth in advancement of technology. There has been an increase in adoption of Bluetooth, Wi-Fi and others across different sectors. The use of Wi-Fi 6, which is the future of W-Fi and IoT is one of the major development in wireless connectivity, which further is offering ground breaking possibilities for developing new products across the gaming industry. Henceforth, the advancement in wireless connectivity is anticipated to drive the gaming console market in future years.

The global gaming console market has been segmented based on type, application, end user and region.

Based on application, the global gaming console market has been segmented into gaming and non-gaming.

Based on end user, the global gaming console market has been segmented into residential and commercial.

Geographically, the global gaming console market has been categorized as North America, Europe, the Asia-Pacific, the Middle East & Africa, and South America. Asia Pacific is likely to be the dominant regional market due to the growing number of active players, and rising advancement in technologies among countries such as China, Japan and India. This is mainly owing to the existence of key players such as Nintendo Co. Ltd, Sony and others in the region. The North America region is expected to generate a remarkable growth rate during the forecast period due to the growing demand for gaming consoles based on advanced technologies such as AR/VR platform, cloud services, Bluetooth, 3D technology and others. The growth of the gaming console market in Europe is expected to notable owing to the rising investment by the consumers across UK, France, Germany and other nations. The Middle East & Africa and South America is expected to be influenced by a growing adoption of modern technologies, as well as the increasing investment by government and other private organizations to adopt these technologies.

The global gaming console market is witnessing high growth mainly due to the growing need for managing complex supply chain operations and database management solutions and increasing demand for waterway transportation activities. Major players have opted for partnerships, acquisitions, and product developments as their key organic growth strategies to enhance their positions in the market and cater to the demands of organizations across end-use verticals. Additionally, the industry players are working towards advancing their product offerings to cater to the rising needs of end-use organizations to provide robust services intended towards achieving accuracy and sustaining the clients for longer relationships.


The key players in the global gaming console market are identified based on their country of origin, presence across different regions, recent key developments, product diversification, and industry expertise. These include Sony Corporation (Japan), Microsoft Corporation (US), Nintendo Co., Ltd. (Japan), Logitech Inc. (Switzerland), Valve Corporation (US), NVIDIA Corporation (US), PlayJam (UK), BlueStacks (US), OUYA Inc. (US), Sega (Japan) and Atari (US). The key strategies adopted by most market players are partnerships, acquisitions, agreements/collaborations, and product developments, among others.

This study estimates revenue growth at the global, regional, and country levels and offers an overview of the latest developments in each of the sub-sectors from 2018 to 2030. For this analysis, MRFR segmented the gaming console market has based on type, application, end user, and region/country.


Based on End User

What was the valuation of the global Gaming Console market in 2020?

What is the predicted growth rate of the global Gaming Console market by 2030?

The global Gaming Console market is expected to exhibit an ~5.37% CAGR rate by 2030.

Which region currently dominates the market and can dominate the global Gaming Console market in 2030?

The Asia Pacific region currently dominates the market and is expected to retain its dominance throughout the forecast period.

Which end user is lucrative in the global Gaming Console market?

Residential segment is the most demanding end user in the global Gaming Console market.