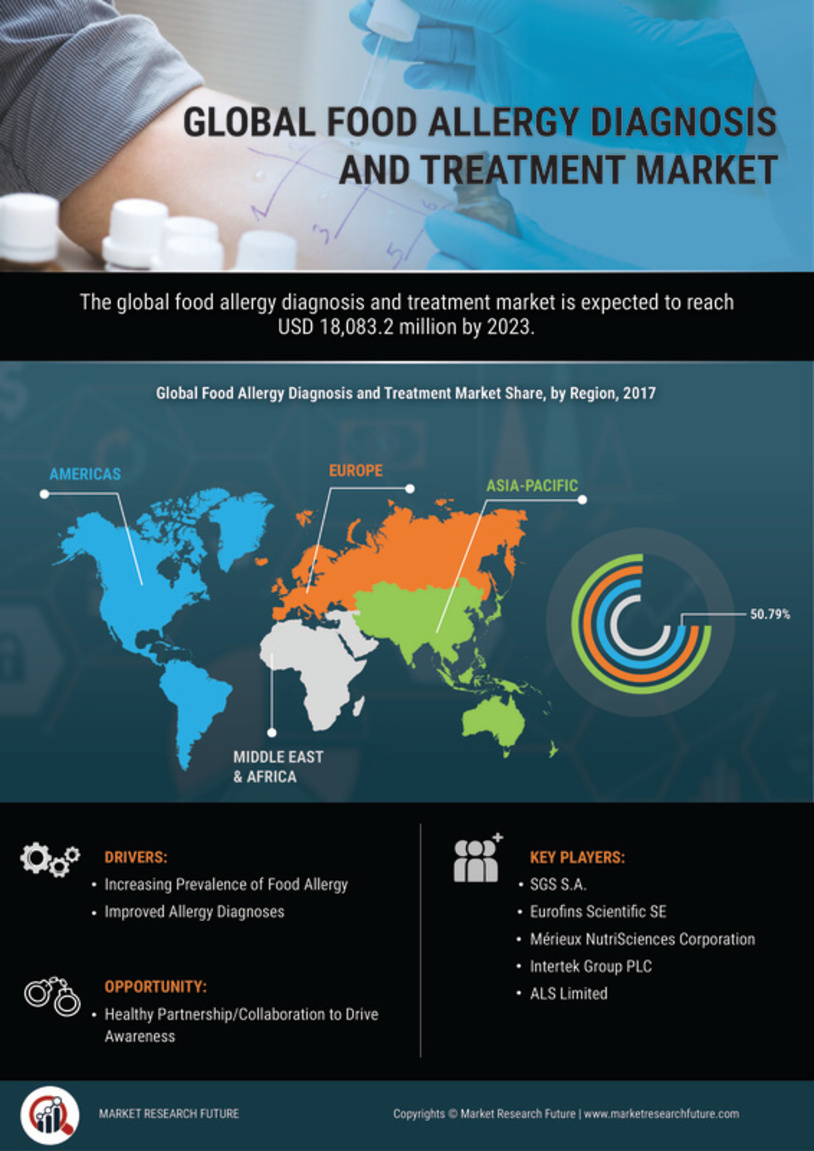 The global food allergy diagnostics & treatment market size was valued at USD 2.73 billion in 2022 and is expected to grow at a lucrative CAGR of 7.6% by 2030

The rate at which the Global food allergy diagnosis and treatment market is expected to grow is at a CAGR of 5.10% and is projected to touch the market value of USD 1830.05 million by the end of 2023. Various factors would lead to the growth of the food allergy market size in the years to come. A few of them are: With the new technologies being introduced almost every day, these innovations are most likely to pull towards the growth and would rise substantially in the forecast period. Another factor that has been the main driving force is the increase in the prevalence of food allergies. With the rise in such cases, the market is expected to experience a high boom in the forecast period. The primary factor that is the restraint in the allergy diagnostics market growth is the high cost associated with the treatment of food allergies.

A wise man rightly said that it is better to build the empire from scratch after a war than to sit back and cry over the ruins. The onset of the Corona pandemic has bought about a change in the life of every individual and every business. Continuous lockdowns and the fear of the virus have made the situation even more vulnerable. But there needs to be a way to ensure that the economies are back on track and the business is not suffering anyone. Keeping all these in mind, the reports have been prepared by quality analysts and experts in the industry. An in-depth analysis of even the most minor details that could benefit the business has been added in the report. Starting from the current food allergy diagnosis and treatment market trends to the qualitative and quantitative analysis, everything covers the report. Not to forget the significant players in the industry and the plans they have been implementing that have made them reach at the point they are at the moment.

With the increase in the number of patients very quickly, it is essential to take care of the time and the cost associated with the food allergy treatment. According to the studies, there are about 15 million people who suffered from these allergies in the US in the year 2015.

Moreover, advanced diagnostic methods are also in great demand because of the increase in cases. Devices like apps, food scanners, and other portable devices have been invented for such people to make them aware if they try to eat something that would deteriorate their health issues. The companies involved in manufacturing such devices have been working regularly to invent new machines at a fast pace. Moreover, their main focus is also on the cost incurred during the manufacturing of food allergy diagnosis devices. They want to make sure that such device gets available to everyone and are pocket-friendly.

The global food allergy and intolerance products market is still looking for much-needed support from the regulatory bodies at all levels: local, regional, and even country-wise. While the cases of food allergy patients are on the rise at high speed, laws, regulations, and subsidies to the manufacturing units working in such devices should be given. While manufacturers have been trying hard themselves to maintain the prices, a little support from the government would make it even better. This would make sure that the patients with food allergies are getting the latest technological device and are also being provided with these at an economical price.

The global food allergy epidemiology pathogenesis diagnosis and treatment market can be subdivided into the following:


The segment that dominates the market is that of seafood, with a market value of around 3,327.4 million USD. The segment that holds second place is the peanuts segments which are estimated to have a CAGR of 3.03%

Based on the diagnosis: This section is further divided into two subtypes:

By regions, the market is subdivided into the following:


The Americas hold the most significant share in the food allergy market size. During the forecast period, it is expected to touch a CAGR of 2.93%. The major drivers in the market's growth are government initiatives, increased cases of anaphylaxis, and new technological advancements.

The region that will pick up the fastest speed in the growth of the allergy diagnostics market in Asia pacific. The region is estimated to witness a CAGR of 4.56% in the forecast period.

In the year 2018, the market in Europe was valued at USD 5,697.4 million. The growth in the market is mainly because of awareness about allergies from food. The increase in the research work in the field has also been responsible for the market's growth.

Middle East is expected to touch a CAGR OF 4.00% during the forecast period. Though it holds a tiny portion in the food allergy diagnosis and treatment market trends, the primary factor driving the growth of the market in the region is an increase in the medical and health facilities.

All these major players in the food allergy and intolerance products market have been working vigorously to take themselves to a position where they can be proud of their work and aim to make the market reach the heights of success. Innovations in the market have been a major driving force in the growth of the market.

Here is the list of recent developments in the market:

The report provides an all-in-one discussion on every topic that a business would need to stand apart, starting from the insights into various industry sectors. A team of experts does the market analysis after a detailed study on every scenario. The report also includes multiple segments of the market based on different types and the dominating segment with the proper reasoning for their dominance. Also, the fundamental assessment of the emerging trends and technological advancements is evident in the report. The competitive players are also included, which enables the business to understand the strategies they have been following to follow their paths and see themselves standing at the same levels after some real hard work. The historical areas are also mentioned in the reports. The pricing and cost associated with food allergy diagnosis are also given a particular focus to make the organization’s finances stronger.

What is the expected CAGR of the food allergy diagnosis and treatment market in the forecast period?

The market is expected to grow at a CAGR of 5.10% in the forecast period.

What is the major restraint in the growth of the food allergy diagnosis and treatment market?

The primary reason behind its lesser growth is the cost associated with the diagnostic and treatment procedures.

Mention the key players in the excellent allergy diagnosis and treatment market?

Mention the segments of the market based on the treatment?

The subdivisions of the market-based in the treatment are as follows: Adrenaline and corticosteroids

By food source, how is the market subdivided?

Based on the source of the good, the market is subdivided into the following: Seafood, peanuts, eggs, soy food, tree nuts, and others

Food Allergy Diagnosis &amp; Treatment Market Size To Expand at a Notable CAGR Of 5.10% During 20...