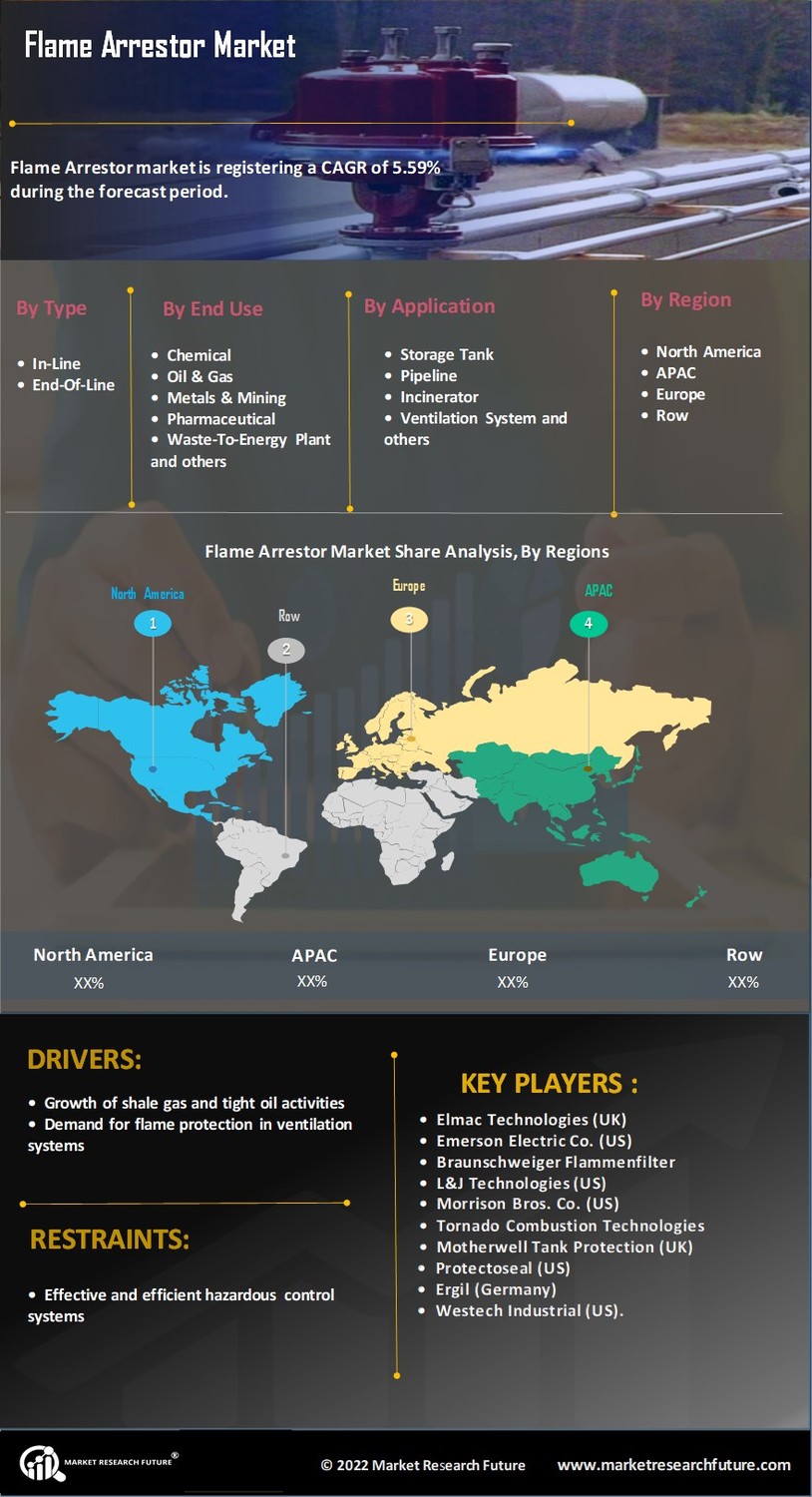 The flame arrestor is a device used to stop a flame from turning into a large fire by extinguishing it in the early stage. It works on the principle of absorbing the heat from the flame and dropping the temperature of the gas mixture below its ignition temperature. The heat is absorbed through the channels commonly made of a wire mesh or a metal sheet with punched holes. Flame arrestors are used in different cases, such as vents of fuel tanks, the exhaust system of the different engines, during the coal mining and several; other situations.

The rapid industrialization across the world and the huge development of the oil and gas and mining industries have fueled the growth of the global flame arrestor market. Flame arrestors are extensively used in the oil and gas industry to prevent any [potentially explosive gas mixture. They are installed mainly in pipelines and vents of the storage tanks, and they are also used in the Davy lamps used during coal mining. As there are high chances of explosive gases, like methane in coal mines, the use of the open flames as a source of light is very dangerous.

Geographically, the global flame arrestor market is segmented into four major regions, which are Europe, North America, Asia-Pacific, and the Rest of the world. The market in Asia-Pacific is expected to lead the global market during the forecast period. The high growth of the oil and gas, pharmaceutical, power generation, chemical processing, and manufacturing industry in countries such as India, China, and Japan are expected to grow the demand for flame arrestors in the region. Furthermore, growing oil exploration activities, construction of tank and storage terminals, and growing investment in refinery expansion. In Asia-Pacific, China held the largest market share due to the growing manufacturing industry and strong economic growth. China has high growth in the manufacturing sector, and which contributed almost 30% toward the country’s GDP in 2016.

Additionally, growing awareness towards employee and industrial safety, major number of manufacturing companies, and favorable government schemes, and growing industrial sector further increases the demand for hazard protection equipment such as flame arrestors are encouraging global players to invest heavily in this region, further grows the demand for flame arrestors in the market during the forecast period. .

Europe flame arrestors market is expected to witness significant growth due to the presence of a wide number of developed nations and their pattern of adopting safety features in the workplaceA flame arrestor is an equipment which allows the gas to pass through small fins and stops a flame to protect and prevent the large explosion and fire. The flame arrestors are used in various industries such as oil & gas, chemical, metal and mining, pharmaceutical, refining, power generation, and metal & mining to reduce the risk of fire hazards.

The Market Research Future report on the global flame arrestor industry covers extensive primary research. This is accompanied by a detailed analysis of qualitative and quantitative aspects by various industry experts and key opinion leaders to gain deeper insights into the market and industry performance. The report gives a clear picture of the current market scenario, which includes the historical and forecasted market size, in terms of value and volume, technological advancement, macroeconomic, and governing factors of the market. The report provides comprehensive information about the strategies of the top companies in the industry, along with a broad study of the different market segments and regions.

What is expected to be the growth rate of the flame arrestor market?

The flame arrestor market is supposed to mark 5.59% CAGR.

What is presumed to be the valuation of the flame arrestor market by 2028?

Who are the key participants in the market of flame arrestor ?

What are the segments of the flame arrestor global market assessed on the basis of application?

The segments of the flame arrestor market are - incinerator, pipeline, ventilation system, storage tank, and others.

Which segments of the flame arrestor global market are assessed on the basis of end-user?

The segments assessed on the basis of end-user are waste-to-energy plant, chemical, metals & mining, oil & gas, pharmaceutical, and others.