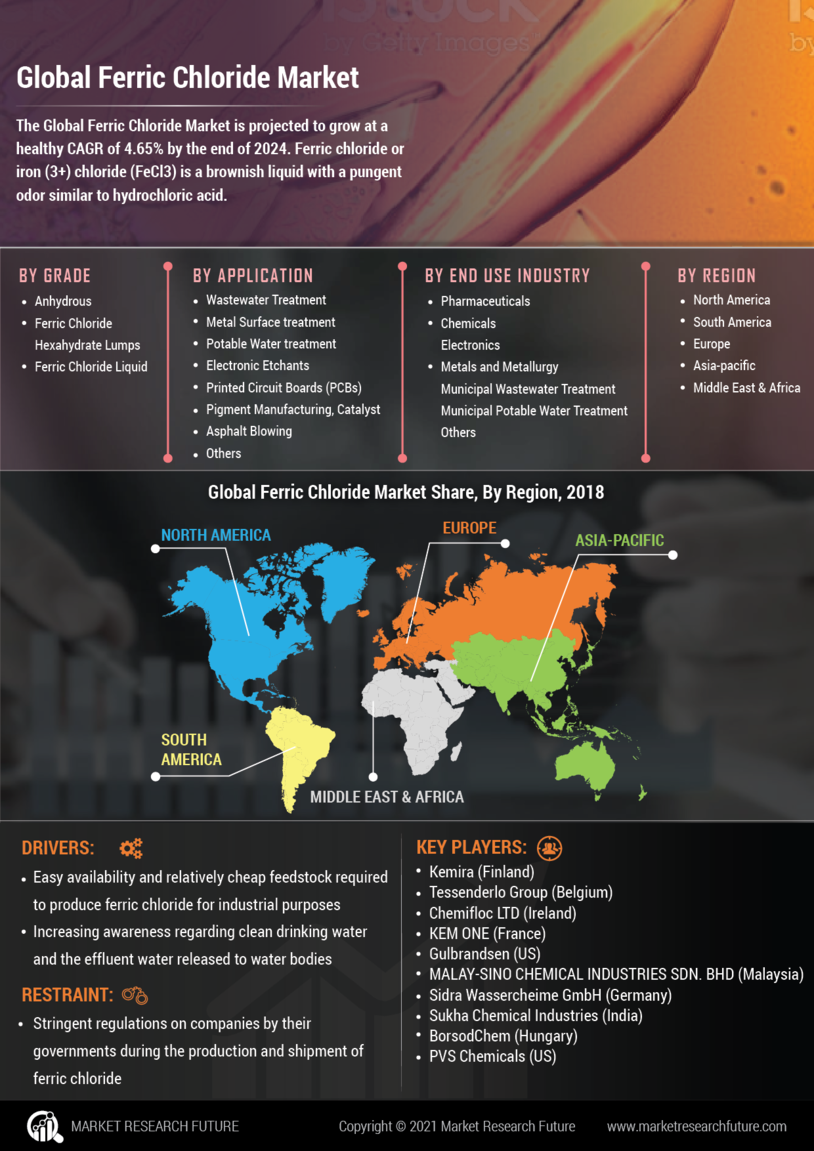 According to MRFR analysis, the ferric chloride market is projected to grow at a healthy CAGR of 4.65% by the end of 2024. Easy availability and relatively cheap feedstock required to produce ferric chloride for industrial purposes are likely to drive market growth. Thus, many chlor-alkali producers invest in the production of ferric chloride. Moreover, increasing awareness regarding clean drinking water and the effluent water released to water bodies is expected to further boost the market growth. Ferric chloride is used as a flocking agent to precipitate phosphorous, which is then filtered to obtain clean water. Furthermore, it has a relatively higher-performance characteristics than other water treatment chemicals such as ferrous sulfate, polyaluminium chloride, and alum, which increases its demand in the water treatment industry. In addition, it is widely used as an etching agent in PCBs, which further drives market growth. Apart from the water treatment segment, increasing demand for ferric chloride in pigment manufacturing and catalyst applications are likely to create lucrative opportunities for the market players operating in the ferric chloride market.

The Asia-Pacific market accounted for the largest market share in 2018 and is projected to register the highest CAGR during the forecast period. This is largely attributed to the increasing consumption of ferric chloride in water treatment and electronics industries. China is the leading country in the region owing to the increasing demand for the product in the etching of PCBs. Japan, South Korea, India, and Malaysia are the other countries contributing to the regional market growth. The European market held the second-largest share in 2018 on account of high utilization of ferric chloride in pharmaceuticals and potable water treatment. Germany is the major contributor owing to the growing demand for the product in pigment manufacturing. France, Italy, Hungary, and Belgium are other regional contributors. The North American market held a substantial market share in 2018 on account of the increasing application of the product in pharmaceuticals and wastewater treatment. The US is the prominent country in the region owing to the surging demand for ferric chloride in sewage and industrial wastewater treatment. The Middle East & Africa market is projected to register a healthy CAGR during the forecast period on account of water treatment of already available scarce water resources. The countries contributing to the regional market growth are Saudi Arabia, UAE, and Egypt. The Latin American market is estimated to register a moderate CAGR during the review period owing to poor regulations on water treatment and limited applications of ferric chloride in the region.

Ferric chloride or iron (3+) chloride (FeCl3) is a brownish liquid with a pungent odor similar to hydrochloric acid. It also exists in anhydrous powder form or solid lumps. It is an industrial scale commodity chemical compound that is produced by reacting dry chloride with scrap iron at high temperature. Ferric chloride is mostly used as a concentrated solution with a minimum concentration of 40% w/w. It is generally used as a flocking agent in water (drinking or wastewater) in various industries.

However, the corrosive and acidic nature limits its usage in certain water treatment plants where non-corrosive alternatives such as alum and ferrous sulfate are used which can hamper the global ferric chloride market. In addition, stringent regulations on companies by their governments during the production and shipment of ferric chloride and its dispersion into a glass or plastic containers are likely to further restrain the market growth. 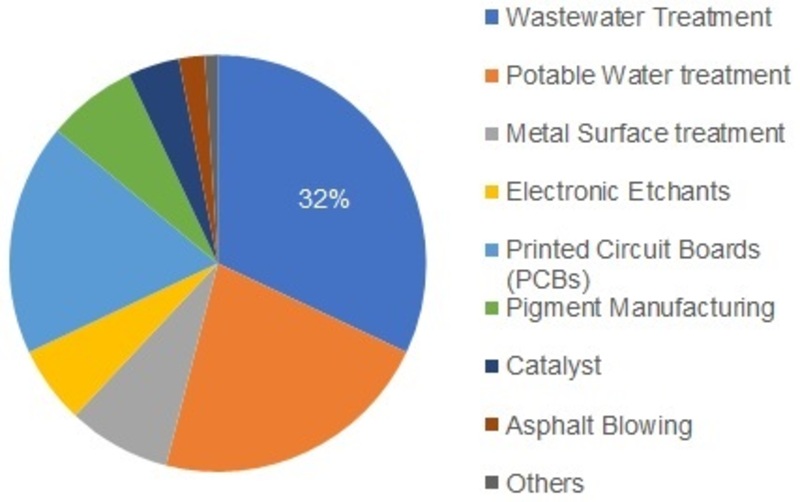 The global ferric chloride market has been segmented on the basis of grade, application, end-use industry, and region.

On the basis of end-use industry, the global ferric chloride market has been classified into pharmaceuticals, chemicals, electronics, metals and metallurgy, municipal waste-water treatment, municipal potable water treatment, and others.

How does the outlook of the global Ferric Chloride Market look like?

At what CAGR is the global Ferric Chloride Market projected to grow during the forecast period (2017-2024)?

Which is the largest application segment in the global Ferric Chloride Market?

Wastewater treatment is the largest application segment in the global Ferric Chloride Market.

Which region holds the largest share in the global Ferric Chloride Market?

Who are the top players in the global Ferric Chloride Market?