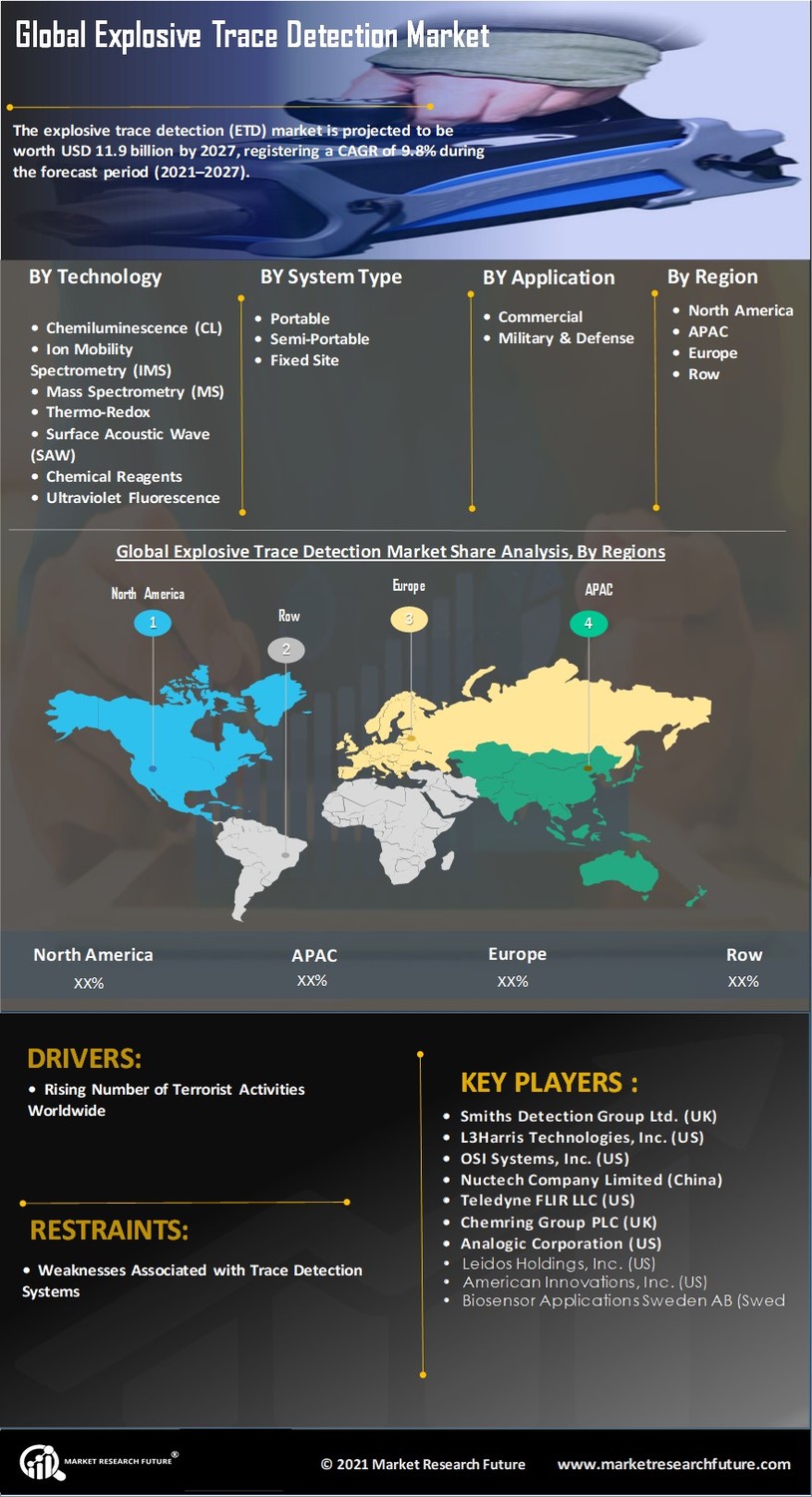 Explosives trace detectors are advanced explosive discovery hardware that help identify the explosives of trace amount. ETDs are also used for recognizing narcotics. The hardware has major uses in airplane terminals, and in regions that are defenseless against terrorist attacks. Surging number of terrorist activities worldwide coupled with the heightened use of explosive trace detectors in law enforcement and public safety sectors bolster the business growth as well. These devices facilitate higher detection and security capabilities for the user.

However, high costs associated with the maintenance and development of advanced ETD can deter market growth. In view of this, the device manufacturers are focusing more on creating affordable yet innovative solutions have a variety of applications in sectors like transportation, and utilities.

The constant efforts of explosive trace detector developers like Chemring Group PLC in capturing a higher share in the markets like Middle East could be favorable as well. Surging commercial activities in these regions present lucrative opportunities to the manufacturers. Asia Pacific will also offer attractive opportunities, given the heightened demand for public safety. Strict government rules pertaining to advanced security screening and the rise in defense budgets in the region foster the ETD market share.

Many governments across the globe are focused on controlling COVID-19 outbreaks in their countries. Hence, they are investing more in healthcare equipment and production and/or purchase of vaccines. Therefore, the expenditures on new explosive trace detection (ETD) systems are expected to be lower than the pre-COVID estimates for the next few years. The demand is likely to reach pre-COVID levels in a couple of years, as the global economy is slowly recovering, with involved entities (airlines, urban transportation systems, etc.)being allowed to operate at a larger part of their capacities.

Thus, it is expected that the global explosive trace detection (ETD) market will grow at a relatively slower rate (as compared to pre-COVID figures) in the first couple of years and grow faster later on.


Over the last decade, there has been an upsurge in terrorist activities across the world. Each region, identified by its own socio-political scenario, is badly affected as these terrorist activities continue to rise. For example, in Africa, factors such as migration, violent extremism, and goods trafficking have been primarily responsible for terrorist activities that have occurred in the past. Issues pertaining to migration across countries such as Egypt, Jordan, and Sudan, religious extremism, lack of natural resources, economic marginalization, state repression, and illegal drugs & arms trade have continuously impacted the political stability in the region, often contributing to the rise in terrorist activities. On the other hand, in Europe, the refugee crisis and economic recession have significantly contributed to internal conflicts. Furthermore, several other ongoing cross-border disputes, such as Iraq & Syria, are not expected to arrive at peaceful agreements anytime soon.

As a result, there has been a continuous rise in civil unrest, political instability, riots & protests, and terrorist activities. All of which has led to an increase in the demand for enhanced security measures. This, in turn, has also led to a rise in the demand for explosive trace detection (ETD) equipment to ensure safety and security at places, such as airports, railway stations, ports, retail markets, hospitals, among others. Therefore, the rising number of terrorist activities worldwide is expected to propel the growth of the global explosive trace detection (ETD) market in the coming years during the forecast period.


With ETD systems becoming essential to the safety and security against rising terrorist activities worldwide, there is an increased focus on their reliability and cost-effectiveness. The acquisition and operational costs involved in the case of ETD systems are high, which not only restricts the market growth but also creates challenges for the government plans to improve the safety levels for the public in general. Thus, the existing manufacturers are investing in developing niche products to meet the rising demand for reliable and cost-effective ETD systems. Therefore, increasing focus on reliability and cost-effectiveness of ETD systems presents lucrative opportunities for the players operating in the market.


A wide range of ETD systems is used for keeping places such as airports, railways, ports, retail markets, and hospitals safe and secure. However, there are weaknesses associated with each of these systems, thereby limiting their capabilities.

In ion mobility spectrometry (IMS) equipment, differentiating peaks may be challenging. Two distinct materials which form ions of similar mass and size may appear as single broad peaks instead of two distinct peaks in an ion mobility spectrometry (IMS) spectrum. Additionally, they require more than usual routine recalibration in extreme weather conditions. Additionally, chemiluminescence (CL) equipment lacks the necessary abilities to detect explosives that are not nitro-based. Furthermore, the thermo-redox system can only be used to detect the presence of NO2 groups and cannot distinguish explosives and potential interferents containing NO2 groups. Thus, weaknesses associated with trace detection systems are likely to restrain the growth of the global explosive trace detection (ETD) market during the review period.

There are several explosives trace detection technologies available in the industry, and each one of them is affected by certain factors. Trace explosives detection involves the acquisition and analysis of microscopic residues of explosives or explosive materials. Trace detection methods cover the detection of vapor (gas phase molecules) and particulate (microscopic particles of the solid explosives material that adhere to surfaces).

Explosives, in usual, tend to produce little vapor. Most of these do not evaporate readily. The evaporation tendency is a function of the vapor pressure of explosive materials. Usually, small amounts of vapor-phase explosive material are emitted from the solid explosive material, which makes the sampling strategies of utmost importance in vapor explosive trace detection.


Based on system type,the global explosive trace detection (ETD) market has been classified into portable, semi-Portable, and fixed site.

The portable segment is forecasted to register considerable growth in the coming years. Much of this can be ascribed to their light, small, and compact design. Additionally, these systems can usually be operated by personnel with only a few hours of training.


Based on application, the global explosive trace detection (ETD) market has been classified into commercial and military & defense.

The commercial segment is forecasted to have considerable growth in the coming years, owing to the growing focus on enhancing safety and security levels at places, such as airports, railway stations, ports, retail markets, hospitals, and others.


The Asia-Pacific explosive trace detection (ETD) market is estimated to grow at the fastest rate, owing to the proliferation of airports, increasing spending on enhancing safety & security levels, and improving military spending by major economies in the region. The region is the largest and most diverse region in the world and consists of major established and emerging economies. The region is comprised of five sub-regions ― China, Oceania, Northeast Asia, Southeast Asia, and South Asia. These sub-regions are characterized by their own unique market dynamics.

China leads the Asia-Pacific explosive trace detection (ETD) systems market, owing to its growing spending on the enhancement of safety & security levels at airports &other places of concern in the urban transit system, and heavy military expenditures, which is highest in the region and second highest in the world. According to SIPRI, China alone accounted for almost $252 billion in 2020, an increment of 1.9% over 2019. The majority of China’s military expenditure has been towards long-term modernization and expansion plans. Thus, the APAC explosive trace detection (ETD) market is expected to grow at the fastest rate during the forecast period.


The global explosive trace detection (ETD)market is expected to grow significantly in the coming years due to increasing defense expenditure, rising terrorist attacks, and notable technological advancements. The global explosive trace detection (ETD) market is characterized by the presence of several international and regional vendors. The market is highly competitive, with all the players trying to gain maximum market share. Frequent changes in government policies, intense competition, and government regulations are the key factors that impact the global market growth. The vendors compete based on cost, product quality, and reliability.

Smiths Detection Group Ltd. is one of the major players in the global explosive trace detection (ETD) market. The company offers security screening and threat detection solutions & services for protection against the threat and illegal passage of prohibitive weapons, explosives, toxic chemicals, contraband, narcotics, and biological hazards. Headquartered in the UK, the company also has its manufacturing facilities in France, Germany, Malaysia, and the US. Some of these manufacturing facilities also serve as their R&D facilities. The company has its sales & service centers in 17 countries to serve its customers around the world.

Additionally, the explosive trace detection (ETD) market has witnessed a few key mergers and acquisitions in the last few years. The established players in the market are working towards the expansion of their product portfolio either through merging with or acquiring another prominent player in the market. As a result, the market is getting more consolidated than before, thereby intensifying the competition among the major players while also strengthening barriers for new players. It has also helped involved companies reduce the cost of their product offerings and increase their revenues.

Rock-It Global has set up a new warehouse unit at Heathrow Airport that will help prevent screening congestion in the future. The company has spent on installation of an Explosive Trace Detector (ETD) machine for dense cargo, and an x-ray machine for onsite screening.

The scope of the report highlights drivers, opportunities, restraints, and challenges surrounding the global market. With easy-to-comprehend segmentation that includes technology,system type,application, and region, MRFR projections are on the basis of historical as well as expected trends. Major firms active in the global market have been profiled as well, paired with the top strategies employed by them to remain competitive in the industry.

What is the global value of Explosive trace detection (ETD) market ?

Who are the Top Key vendors of Explosive trace detection (ETD) Industry ?

In Which Region Explosive Trace Detection (ETD) Market is Growing ?

Which Are The main Drivers Of Explosive Trace Detection (ETD) Market ?

Which is Latest Opportunity's of ETD Industry ?

Growing Demand for Aerospace And Defense Across the Globe is Expected to Boost the Demand for Exp...