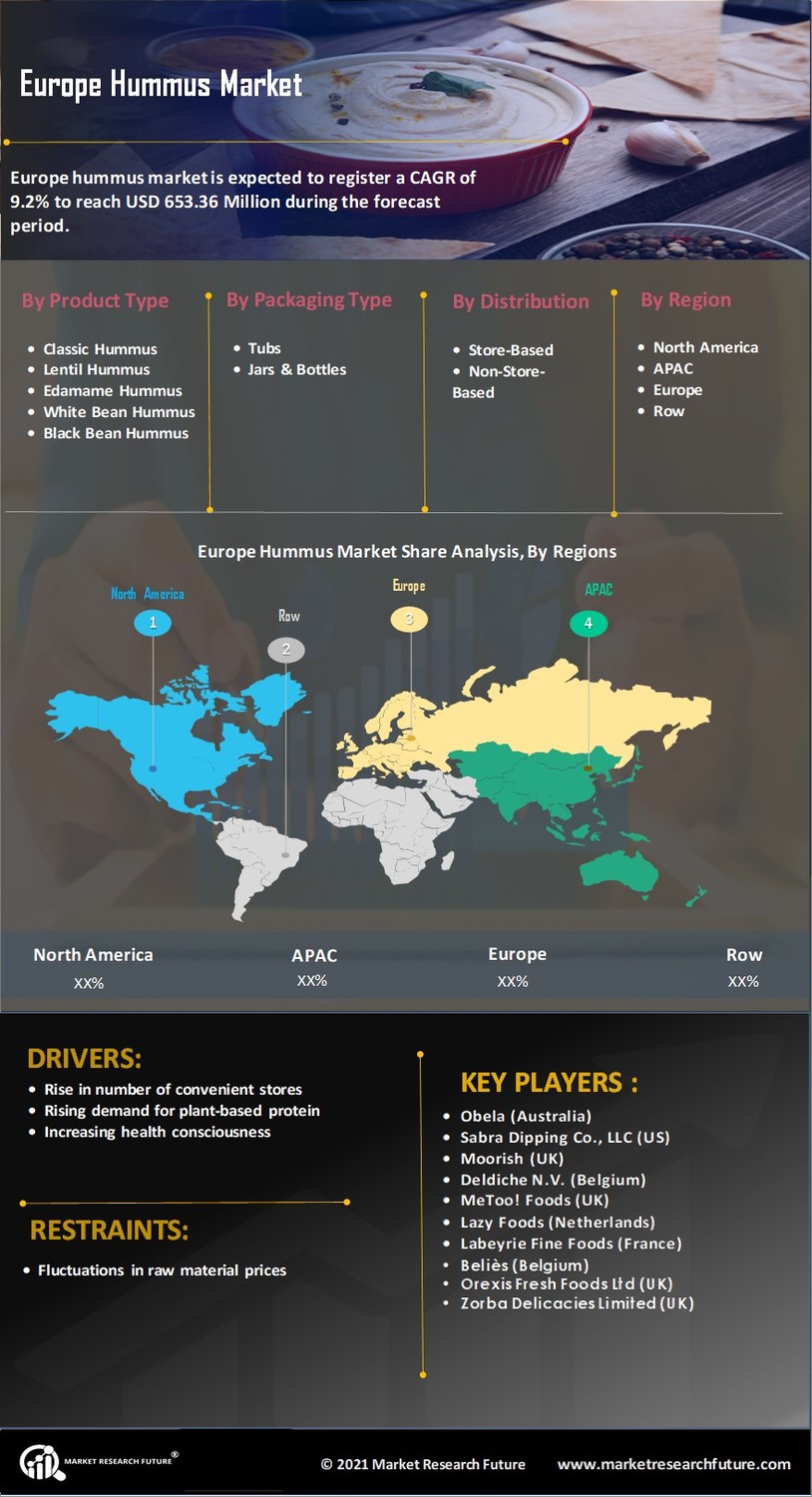 Europe hummus market is expected to register a CAGR of 9.2% to reach USD 653.36 Million by 2026. Hummus is a Middle Eastern and Mediterranean food dip or spread made from cooked, mashed chickpeas or other beans, blended with tahini, olive oil, lemon juice, salt, and garlic. The hummus market includes the traditional chickpea hummus along with variants such as lentil hummus, black bean hummus, and white bean hummus.

The surging demand for packaged hummus products, especially in Western Europe, is a crucial determinant catalyzing the growth of the Europe hummus market. The growth can be attributed to the rising demand for plant-based protein and the increasing health consciousness.

The outbreak of COVID-19 has impacted the Europe hummus market in many ways. The stockpiling practice has led to a sudden hike in the value of the Europe hummus market in 2020, which is expected to normalize after the stabilization of the outbreak. However, the limited availability of shelf-stable food product stocks in retail stores due to a high impact on logistics is currently one of the biggest concerns across Europe. There is a rising shift in shopper behavior from retail to e-commerce and new consumption patterns across the region. It has also been observed as a result of stockpiling, retailers are running out of stock, and the grocery shelves for popular items sit empty, which is eroding the consumer’s brand preferences. This is promoting the consumption of the products manufactured by small regional players in the market.

The Europe hummus market is expected to register a notable growth rate during the forecast period. The rising demand for plant-based protein and increasing health consciousness are the major factors driving the market growth. With the increasing adoption of veganism in Europe, especially in the UK, the demand for plant-based protein has been growing. Manufacturers are also expanding their product lines by launching organic hummus, which is expected to create new opportunities for the vendors active in the regional market. However, fluctuations in raw material prices are projected to restrict the growth of the Europe hummus market.

The classic hummus segment accounted for the major share in 2019 and is expected to expand at a substantial CAGR and reach USD 435.42 million by the end of 2026. The segment is expected to maintain its dominance during the forecast period due to the increasing popularity of Middle Eastern cuisine in Europe. Major players such as Strauss, Sabra Dipping Co., LLC, and Moorish offer classic hummus as part of their product portfolios. Owing to its flavor and health benefits, classic hummus is extremely popular among consumers. However, the lentil hummus segment is projected to exhibit the highest CAGR during the forecast period.

The UK accounted for the largest market share of 42.09% of the Europe hummus market in 2019. The UK, Germany, and France are the major country-level markets in the region. The UK is the largest country-level market with the highest number of hummus consumers. Germany is another significant market for hummus. Spain is considered a potential market in the region. Spanish food is considered Mediterranean. Apart from this, Spain is a major producer and consumer of olive oil and paprika. Thus, hummus is gaining popularity in Spain.

The players operating in the Europe hummus market focus on product launches, expansions, and partnerships to strengthen their position and capture higher market shares.

What is the CAGR of the Europe hummus market?

What is Europe hummus market valuation?

What can drive the Europe hummus market?

In which region is Europe hummus market expected to thrive?

The UK hummus market to gain high revenue for global market in the review period.