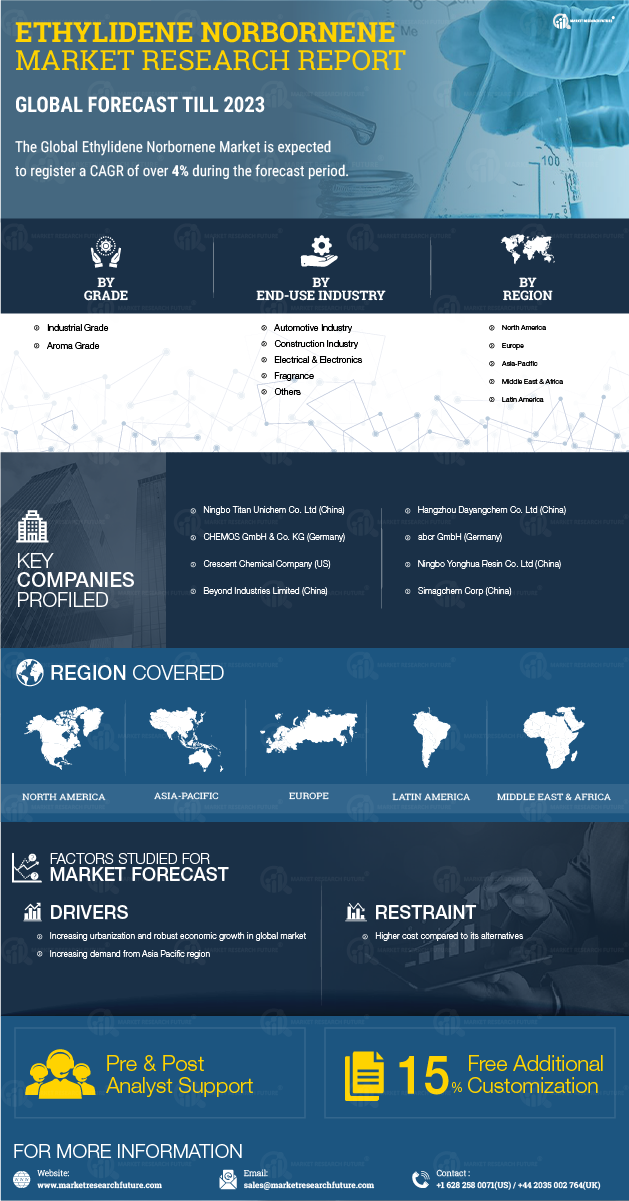 Global Ethylidene Norbornene Market stood at over 70 kilotons in 2018, and the global market is expected to register a CAGR of over 4% during the forecast period. Ethylidene norbornene is a bicyclic monomer that is manufactured from vinyl norbornene. It is used to prepare ethylene propylene diene monomer rubber for non-tire synthetic rubber applications. Due to this application, the market is noticing huge growth. The monomer properties are rapid curing, high tensile strength, and high wear and weather resistance. These applications are rising in the market’s demand in the end-user segments, consisting of industry verticals like automotive, electrical & electronics, building and construction, and others. TheThe growth of the Ethylidene Norbornene Market is chiefly driven by the rise in EPDM in various industries. It is used in fragrances and flavors based on its molecular structure.

The market’s growth is influenced by socioeconomic trends like the growing rate of the middle-class population, massive economic growth, and changes in demographics in regions like China, South Africa, India, Brazil, and other countries.

The demand for EPDM in the production like gaskets, seals, roof sheeting, and others in the industrial sectors like automotive and building and construction. The automotive segment acquires the largest market share in the forecast period, followed by the building and construction segment. Furthermore, the monomer's electrical insulation and heat, weathering, and resistance properties drive the Ethylidene Norbornene Market demand in the electrical & electronics industry.

The global ethylene norbornene market is a highly consolidated market with leading two players accounting for the majority share in the production and supply of ENB. Furthermore, key market participants are investing for debottlenecking their production capacity to meet the growing global demand and establishing their foothold in developing countries such as China, India, and ASEAN countries. 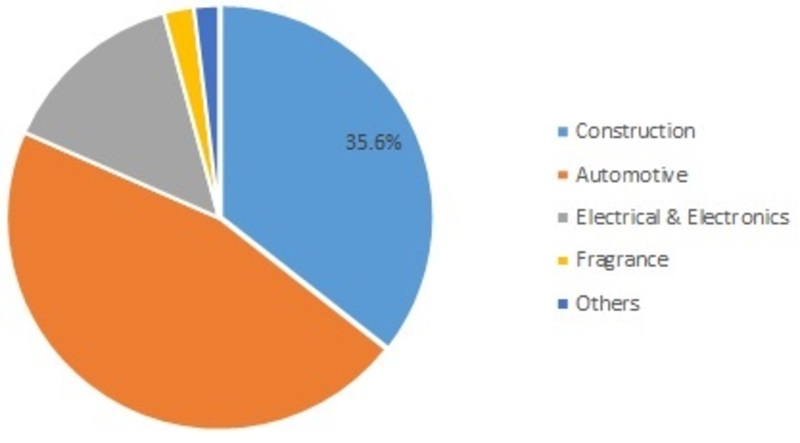 Asia-Pacific is estimated to account a significant share of the global ethylidene norbornene market in 2018 as a result of rapid industrialization and urbanization in developing economies such as India, China, and ASEAN countries. The surge in automotive production in the region and increasing infrastructural investments in the region are some of the key factors expected to boost the demand for ENB in the region during the forecast period. Moreover, favorable government policies in countries such as India and China to support domestic manufacturing industries are expected to contribute to the growth of the regional market during the forecast period. Furthermore, the leading market participants in the regional market are statically planning to strengthen their foothold in the developing countries particularly China and India to increase their market share.

The market for ENB in Latin America is expected to grow substantially owing to the growing automotive industry and positive economic & political outlook. The Middle East & African market is expected to be low valued and witness moderate growth during the forecast period.

The global ethylidene norbornene market has been segmented by grade, end-use industry, and region.

Based on grade, the global market has been divided into industrial grade and aroma grade.

By end-use industry, the global market has been classified into automotive, construction, electrical & electronics, fragrance, and others.

The global market, by region, has been segmented into North America, Europe, Asia-Pacific, Latin America, and the Middle East & Africa.Recent Development

Asia’s ethylene propylene diene monomer market will showcase price potential due to the rise in feedstock costs. The demand is expected to increase in the automotive sectors in Asia, Europe, Latin America, and the US.

At what CAGR is the ethylidene norbornene market projected to grow during the forecast period?

ethylidene norbornene market is projected to grow at a 4% CAGR between 2017-2024.

Which region is projected to lead the ethylidene norbornene market?

The APAC region is projected to lead the ethylidene norbornene market.

Which end use industry will dominate the ethylidene norbornene market?

What are the key factors driving the ethylidene norbornene market growth?

Increasing use in different end use industries and unique molecular structure are the key factors driving the ethylidene norbornene market growth.

Which factors may limit the ethylidene norbornene market growth?

Ethylidene Norbornene Market is Increasing Manufacturing of Automobiles and Expected to Fuel Dema...