Ethanolamines are organic compounds produced by the reaction between ethylene oxide and ammonia. They are composed of amino acids. Monoethanolamine, diethanolamines, and triethanolamines are the three types of products manufactured in the market. These products are known for their colorless and viscous features, along with the comparable odor of ammonia. The improving standard of living and growing demand for the product are the important factors which are influencing the market positively. Due to these factors, they are used in various applications such as detergents, chemical intermediates, herbicides, metal cleaning, and others.

Among the various segments of the market, triethanolamines sub-segment holds a major portion due to growing consumption of the product in numerous end-uses such as fragrances, hair care products, hair dyes, wave sets, shaving products, sunscreens, and others. They are used as a corrosion inhibitor and surfactant in various applications. Moreover, these materials are also utilized to remove the impurities such as hydrogen sulfide and carbon dioxide from natural gas. It is projected that the diethanolamines sub-segment is set to propel the market over the assessment period. These materials are consumed extensively in cosmetics & personal care sectors due to changing lifestyles and rising demand for the product. The market by the application segment is further classified into detergents, chemical intermediates, herbicides, metal cleaning, gas treatment, cement, personal care, textiles, and others. Among these, detergents segment has been leading the market due to endless use of the product as emulsifying agents, boosters or anti-static agents in various applications. Therefore, the growing demand for the product from chemical intermediates, herbicides, cement, textiles, and others is estimated to drive the market on significant rate due to rising agricultural activities and cleaning purposes in end-use industries. 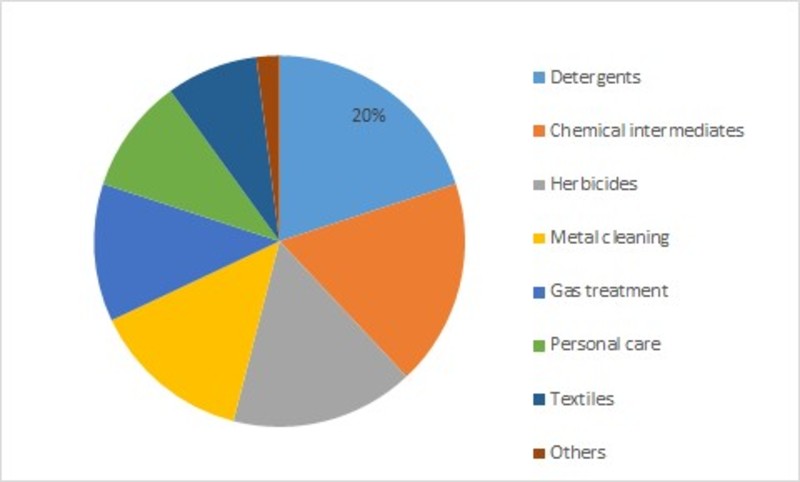 The ethanolamines market is segmented across five regions: Asia Pacific, North America, Europe, Latin America, and the Middle East & Africa. Among these, Asia Pacific holds a major share of the market due to the growing demand for the diethanolamines in detergents, chemical intermediates, herbicides, metal cleaning, and others. The increase in disposable income coupled with rapid urbanization has propelled the region to witness a higher growth over the assessment period. Countries such as China, Japan, and India are the major players in this market.

The North America region is growing significantly in the market due to the presence of high standard of living and increasing production of cosmetic products. It is predicted that growing investments in the end-use industries is likely to drive the market in the region during the forecast period. The growing consumption of triethanolamines in dyes, shampoos, cleansers, and others has propelled countries such as the U.S., Canada, and Mexico to achieve a stunning growth in the market as they provide excellent flexibility, stability, and durable nature to the product.

The European market has received a diminishing growth due to stringent rules and regulations implemented by regulatory bodies to follow non-volatile products in end-uses. The manufacturers and investors are shifting their focus to produce bio-based alternatives in major sectors. It is estimated that the growing innovation and technological advancement are predicted to propel the growth in countries such as the U.K, Italy, Germany, and France during the forecast period.

The Latin American region is estimated to witness a significant growth in the market due to boundless use of products in the agriculture sector. These emulsifying agents are estimated to drive the market in the next few years due to their growing use in herbicides and gas treatment applications. Moreover, the Middle East & Africa is anticipated to witness a slow growth in the market due to volatile prices of raw materials such as ethylene, and others.