Electric Fuse Market share is projected to reach USD 5.26 Billion by 2027 with a CAGR of 5.65% during the forecast period.

Electricity is attributed to the revolution in human life. It is essential in the modern life of human beings, and one cannot think of the world without electricity. Electricity is part of our daily living, such as lighting rooms, working fans and domestic appliances like refrigerators, AC, washing machines and many more. However, safety and reliability are the utmost in the operation of electric devices.

An electric fuse is necessary for safe operation and to avoid any fire hazard due to a short circuit. A fuse protects appliances by creating an open circuit condition when the extreme current runs into it. The metallic strip of the fuse got melted by the excessive heat generated due to the extreme current that prevents further damage or short circuit. Thus, the fuse intercepts severe damage to valuable electric appliances and saves human lives by preventing fire hazard due to the short course. The electric fuse market for circuit breakers and fuses has been growing over the forecast period due to the rising demand for advanced equipment in electronics.

The major factors driving the growth of the global market includes rising investments in the renewable power industry, transmission and distribution infrastructure, and construction industry. According to OECD, the cumulative power sector investment from 2017 to 2040 would approximately reach USD 5.9 trillion for transmission and USD 2.1 trillion for distribution network. Thus, the demand for electric fuse are estimated to increase during the forecast period.

Additionally. the global electric fuse market is projected to grow at a high rate during the forecast period due to the increasing adoption of renewable energy sources. According to IEA, renewable energy sources holds the la OECD rgest share of investment in power generation, owing to investments of approximately USD 350 billion annually. Countries across the globe are shifting their focus towards renewable power generation. For instance, the government of China aims to spend USD 360 billion on renewable energy by 2020, leading to increase in the demand for electric fuses in the country.

The global electric fuse industry has been segmented based on type, voltage, end-use, and region. Asia-Pacific is expected to be dominant regon in global market. On the basis of voltage, the global market is classified into low, medium, and high voltage. Medium voltage segment is expected to be the fastest growing segment in the electric fuse market. There is high demand for medium voltage fuse due to the continuous construction of transmission and distribution networks along with high replaceability of fuses. On the basis of type, the global electric fuse market is segmented into power fuse & fuse link, distribution cutouts, and cartridge & plug fuse. On the basis of end-use, the market is segmented into utilities, industrial, residential, commercial, and transportation. The transportation segment is estimated to register the highest growth rate during the forecast period. 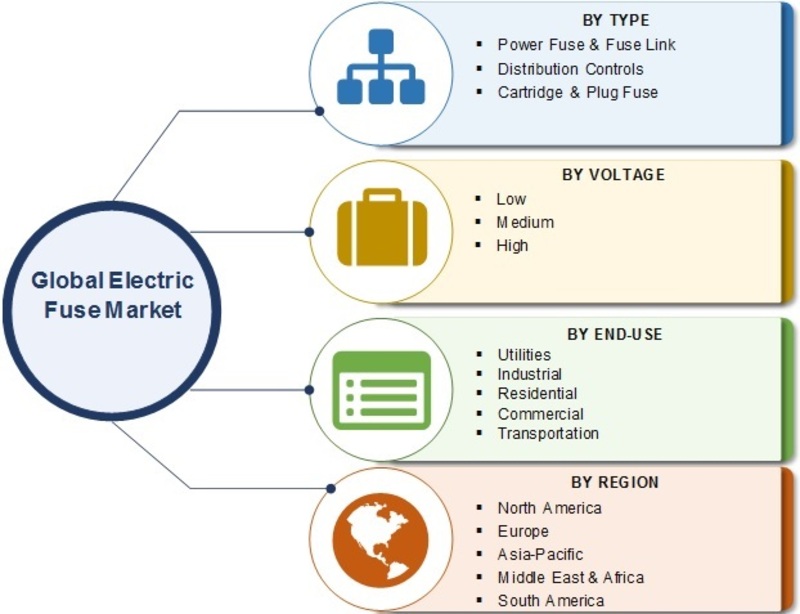 The global electric fuse market is expected to witness substantial growth during the forecast period owing to the growing offshore investments in renewable power, T&D, and construction industry. According to India Brand Equity Foundation (IBEF), increasing electrification would drive the growth of power consumption to 1,847 TWh in India by 2022.

An electric fuse is a component used to safeguard the electrical components from high currents. A metal wire or strip is an essential component of an electric fuse, as it melts when high current flows through it, thereby interrupting the electric current. It is used for overload and short circuit protection in high voltage and low voltage installations. Advantages of electric fuse includes, zero maintenance, lesser operation time compared to operation of circuit breaker, and the ability to interrupt short circuit current without producing noise or smoke.

On the basis of region, the global electric fuse market is segmented into Asia-Pacific, North America, Europe, the Middle East & Africa, and South America. Asia-Pacific holds the largest share in the electric fuse market due to increased investments in the smart grid infrastructure development, T&D spending, growing dependence on renewable power generation sources, and infrastructural activities in the recent past. China accounted for the highest installed generation and distribution capacity in the region due to the high demand for electric supply, resulting in an increased demand for electric fuse. Similarly, growing power distribution in countries such as India, Australia, and Indonesia would drive the growth of electric fuse in Asia-Pacific. Moreover, North America is expected to be the second-largest market for electric fuse. The US is expected to dominate the market in North America, owing to the growing T&D lines.

What is the estimated CAGR of the electric fuse market?

The electric fuse market is poised to mark 5.65% CAGR.

Who are the key players of the electric fuse market?

What is projected to be the valuation of the electric fuse market by 2027?

The electric fuse market is projected to value at USD 5.26 Bn.

What are the voltage-based segments of the electric fuse market?

The voltage-based segments are medium, low, and high.

Which regional segment is poised to secure the pole position?

APAC is presumed to hold the pole position.