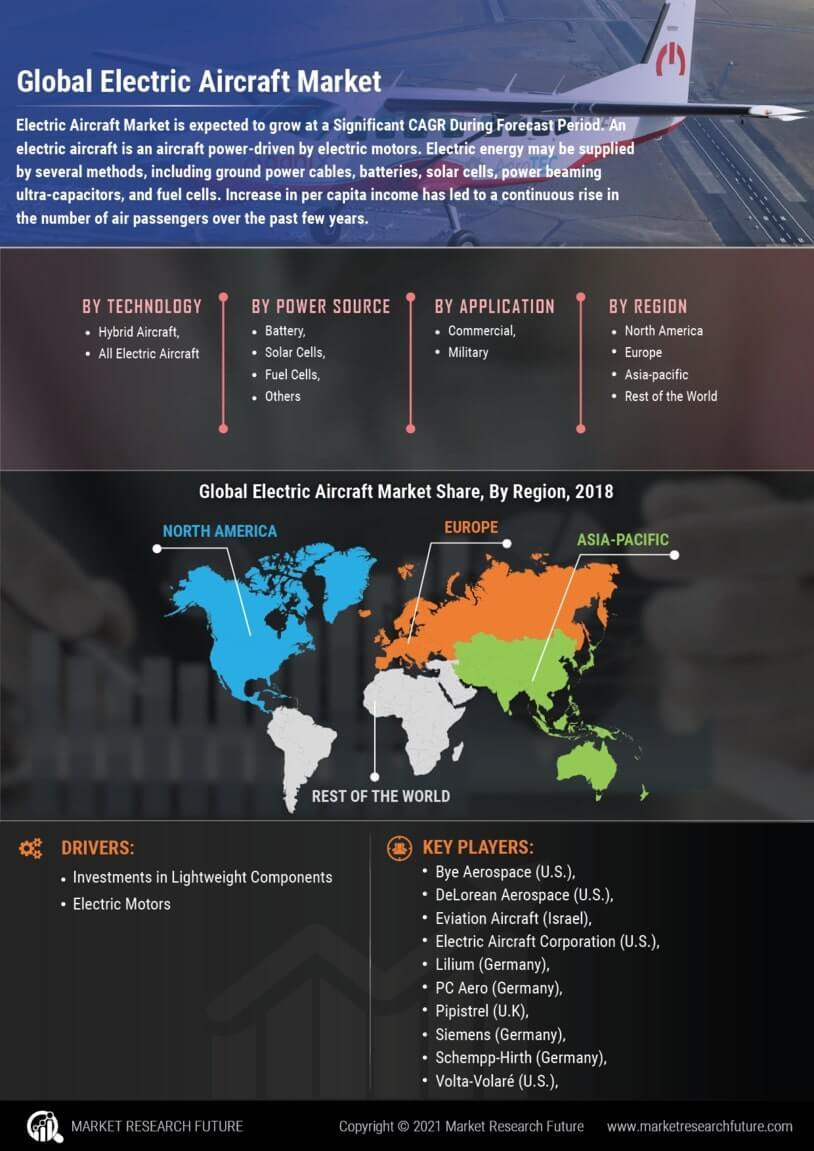 While attaining this explicit revenue amount, the global market is likely to expand at a CAGR of 14.8% during the forecast period. The growth of this market is mainly driven by the large-scale and expanding deployment of the urban air mobility aircraft and further, the increasing use of electric aircraft for cargo applications and different aerial mission-specific activities is helping the market to propel at an excellent degree amid the global market functioning in locations.

The sudden and surprising spread and the outbreak of the novel COVID-19 pandemic have taken a toll on the crisp functioning of various industrial sectors, with aviation being one of the worst affected owing to the constant need for the sector and its services. However, the electric aircraft market did not seem to have been impacted much by the pandemic as much as the aviation industry as a whole. Electric UAVs were recognized to be widely used by militaries for a variety of missions and reasons like border security, while the global governments and law enforcement agencies used them on an experimental basis.

The Civil and commercial applications of the electric aircraft market include methods of transportation of medical supplies by prominent companies like Zipline and mostly for processes like aerial photography. Retail and other logistics-concerned companies are increasingly looking forward to the usage of electric UAVs to distribute the essential items due to intermittent lockdowns imposed and the imposition of social distancing norms and protocols worldwide. In the US region, prominent global companies like Amazon and USP have already scaled and enhanced their usage of electric drones for their deliveries. Electric drones are further, witnessing an increased application in global markets like Africa, as they are being used in the form of the art of EMS services to supply medicines and other amenities as well as transport organs and blood across cities. These factors have risen and hence, helped the electric aircraft market to sustain the overall impact of the COVID-19 pandemic on the global economy since its outbreak.

Based on the discussions by the Air Transport Action Group (ATAG), the global flights have produced around 915 million tons of carbon dioxide during the historic forecast period that had ended in 2019. The global aviation industry is known to be producing around 2% of all the CO2 emissions induced by humans.

With a substantial increase in the number of global aircraft fleet size and air travel, these market figures are expected to rise even higher. Hence, there has been a constant and pressing need for electric aircraft, that will help in reducing the carbon footprint of the aviation industry. Also, global organizations and governing bodies such as the International Civil Aviation Organization, along with the Federal Aviation Administration, and the European Union Aviation Safety Agency have called for discussions regarding the sustainable alternatives of aircraft fuel as they estimate that aircraft-generated emissions are likely to be three-fold in volume by 2050. Since the electric engines do not have noises that are associated with jet or combustion engines, they result in very less or no aircraft noise levels. In an electric aircraft, the electric aircraft manufacturers aim to improve efficiency and innovation by replacing hydraulically controlled systems with electric systems.

One of the biggest challenges that are being faced by electric aircraft manufacturers face in terms of long-distance flights is the low energy density of the batteries. The energy density for the aircraft propulsion is usually measured in the form of watt-hours per kilogram (Wh/kg). The existing lithium-ion batteries, as a part of the market, have an energy density of around 250 Wh/kg, which is way lesser in comparison to the energy density that has been provided by conventional jet fuel or kerosene of around 12,000 Wh/kg. Thus, all-electric long-haul commercial flights are still emerging in the form of a distant reality as conventional fossil fuels are known to be about 14 times more energy-rich than battery-powered alternatives.

The logistics sector has been rising concerned regarding the emissions that are resulting from cargo airplanes and is further, in a race toward zero-emission logistics. Stakeholders in the logistics sector are largely investing in electric modes of transportation for the reduction of the carbon footprint. Therefore, the use of all-electric aircraft as a preferred mode of transport in the logistics sector opens up new avenues for electric aircraft manufacturers. The Cargo aircraft or freight aircraft are being used for carrying various logistics that can be either operated by civil passengers or through cargo airlines by private individuals or the defense forces of individual global countries. According to information that has been circulated by Statista, the global volume of air freight has increased significantly in the last few years, as a part of the historic forecast period that had ended in 2019, and reached 55.9 million metric tons in the pandemic year of 2020. The global volume is projected to increase, owing to the rise of e-commerce.

The electric radio control aircraft has been on the verge of witnessing an excellent amount of growth and demand owing to the expansion in the product portfolio that has been a result of the rising investment and funding followed by the recent developments that have been undertaken. The market has been segmented based on the following factors:

The electric aircraft companies are functioning in the platform segment of the market and include Regional Transport Aircraft, Business Jets, and others like Light and Ultralight Aircraft.

The market segment of the system includes Batteries, Electric Motors, Aerostructures, amongst others like Avionics, and Software.

The electric aircraft market growth can be attributed to the type segment of the market that includes Fixed Wing, Rotary Wing, and Hybrid Wing.

The technology segment of the market includes CTOL, STOL, and VTOL.

The hybrid electric aircraft market is likely to undergo maximum growth in North America during the forecast period. North America has accounted for the largest share of 34.3% of the global electric aircraft market and is expected to grow at a CAGR of 16.1% during the forecast period that ends in 2028. The US region has the largest UAV fleet used in military and civil applications.

The hybrid electric aircraft market is home to the prominence of competitive market players like:

The electric aircraft market report has been prepared for the investors to take investment decisions and further, understand the factors that will either drive the global market towards growth or will hamper the market from growing as per the predictions. The market report helps to understand the basis of the market functioning and segmentation that is helping to meet the rising and vibrant needs of the global target audience.

How The Electric Aircraft Market in Growing Globally?

Who are the top Key Vendors in electric aircraft market

The hybrid electric aircraft market is home to the prominence of  market players are : Airbus SE (Netherlands),Elbit Systems Ltd. (Israel),AeroVironment, Inc (US)

In Which Region Electric Aircraft Market is Dominated ?

Electric Aircraft Market is estimated to witness a CAGR of 15.5% by 2030