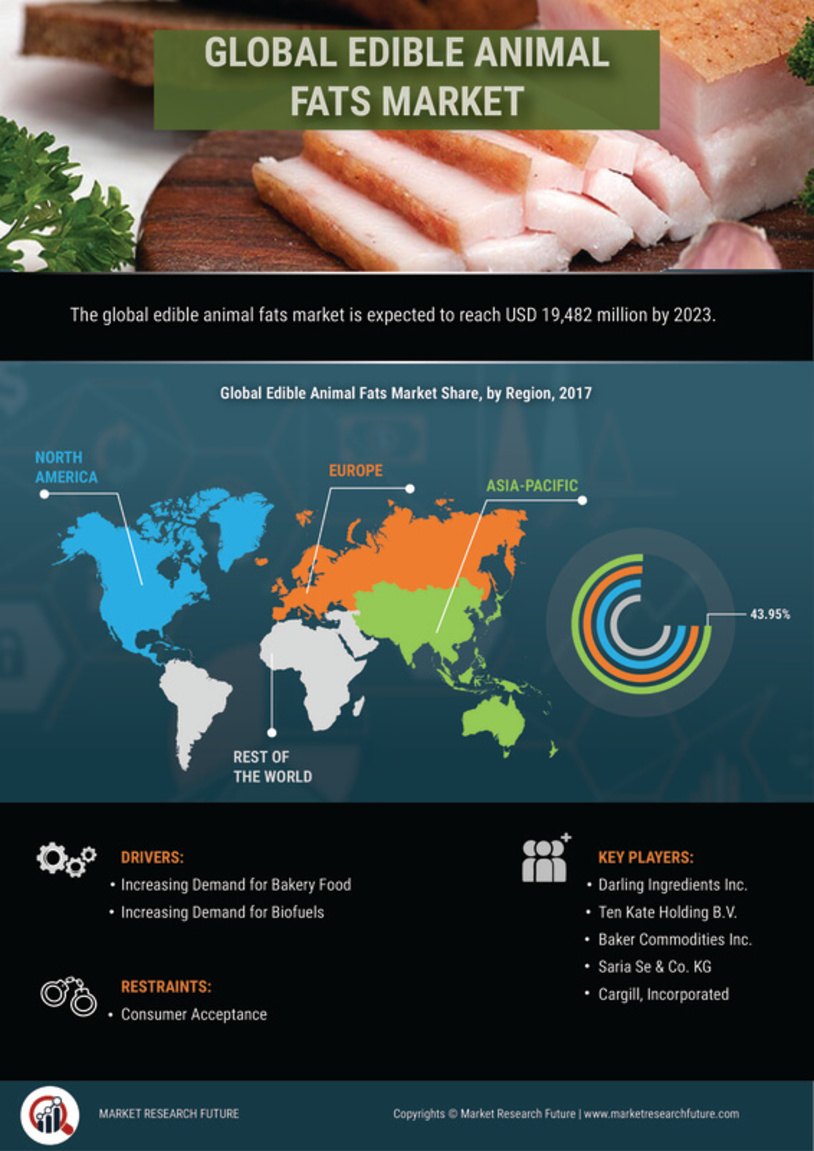 Edible Animal Fat Market estimated to be valued at USD 60.4 Billion recording a CAGR of 4.50% during the forecast till 2030

The global edible animal fat market size is projected to reach approximately USD 60.4 billion by 2030, at a CAGR of 4.50% from 2022 to 2030. The selling of edible animal fats derived from animals bred, raised, slaughtered, and processed expressly for humans by entities is referred to as the edible animal fat market. Margarine, shortening, and compound fat are generally produced from animal fats. They are also present in many processed foods. Animal fats make soap, lubricants, fatty acids, and feeds. The market is expanding due to how crucial animal fat is to manufacturing various foods. For frying, baking, and other cooking tasks, animal fats are needed. Edible animal fats are utilized in meat products, margarine, baked goods, sauces, and soups, together with other ingredients. These fats are widely used in food services and households and are highly sought-after for usage in animal feed due to their outstanding taste and texture. As a result of these causes, the market has grown faster.

Numerous people and their businesses have been impacted by COVID-19. Government-imposed lockdowns and workforce shortages in several nations hampered slaughterhouse operations. In addition, as per the food and agriculture report, many new human diseases are directly linked to food and substances of animal origin, which has further decreased meat consumption in many countries. As a result, less animal fat was available for human consumption.

As per the edible animal fat market analysis, the rise in demand from the food service industry and the expanding use of lard as bread spreads in the baking business are driving the market globally. The edible animal fat market is expanding rapidly due to the increased demand from downstream industries such as biodiesel, food, oleochemicals, and pet food. The demand for lard (as a spread for bread) from the German baking sector is expanding, thereby enhancing market growth. The need for tallow, used in animal feeding and biodiesel, is rising, adding to the market for edible animal fat. Additionally, several significant firms are working hard to maintain their position by implementing tactics like alliances and collaborations to outperform their competitors in the global market.


Edible animal fats are great fatty acids, vitamins, and energy sources. They also aid in improving the flavor and texture of meals. These fats, like tallow and butter, are therefore preferred by many food processors and bakers. Additionally, animal fats provide high levels of oleic acid, which has been linked to several health advantages. Consumable animal fats like tallow and lard are greatly favored during food preparation because of their delicious flavor and superior baking and frying capabilities. Lard and goose fat are common spreads in Germany and France, whereas tallow is used for frying French fries in America. As a result, the widespread use of animal fats in food is projected to increase demand for them globally.


Food and additives are becoming a major concern for consumers everywhere. As a result, food producers take great care when creating any product. Additionally, the health issues brought on by a large diet of animal products cause people to use saturated fats less frequently. Vegetable oils like palm, palm kernel, coconut, and partially hydrogenated oils began to replace animal fats since solid fats are essential to some foods. Therefore, these factors are projected to limit the market's growth during the forecast period.


The European Food Hygiene Regulations state that edible animal fats come from creatures that have been bred, raised, killed, and processed exclusively for human consumption, unlike vegetable oils, especially palm and sunflower oils, which are grown primarily for their oil content. Additionally, animals that produce these fats are primarily reared and cared for their milk, meat, and wool. In addition, these fats' economic value is typically determined by the proportion that each product endures. As a result, co-products like animal fats are held accountable for a lesser proportion of the overall environmental impact. Animal fats are therefore considered sustainable compared to vegetable oils like palm, sunflower, and coconut. It will present an opportunity to expand the global market in the next few years.

Based on raw material, the global edible animal fat market is segmented into lard and tallow. The tallow category dominated the market share in 2021. The demand for tallow from the biodiesel industry, which makes up nearly 9% of the feedstock, is driving its growth. However, the supply of tallow has grown because of the fast rise in worldwide slaughter rates. Besides this, the lard category is the fastest-growing segment. Many different types of food use lard as a cooking fat or shortening. Lard is frequently favored in western cuisines because it can occasionally be used in place of butter.

Based on the form, the global edible animal fat market is divided into liquid, solid and semi-solid. The solid category had a prominent share in 2021. Solid fats are things like suet, butter, ghee etc. Cattle, pigs, and other mammalian tissues are the principal sources of this kind. Normally, it is solid at normal temperature. Besides this, the semi-solid category is the fastest growing. A semi-solid substance, edible animal fat mostly consists of triglycerides. It comes from lipids, which are solid but turn liquid when heated at ambient temperature. Food producers employ it in creating their products for both functional and non-functional reasons.

Based on the source, the global edible animal fat market is divided into cattle, pigs, and others. The cattle category had a prominent share in 2021. The cattle industry is the major one due to the high customer appetite for edible animal fats derived from cattle, such as butter and tallow. Additionally, many cattle animals are accessible, which increases the availability of edible animal fats. Besides this, the pig category is the fastest growing. Lard, which is highly utilized in the culinary business for frying, grilling, roasting, and baking, is driving the increase in demand. By region, the global edible animal fat market has been divided into North America, Europe, Asia-Pacific, and the Rest of the World. North America accounted for the most extensive market share. Asia-Pacific is projected to exhibit the highest CAGR during the review period.

The Asia-Pacific edible animal fat market is anticipated to be the fastest growing rate. Technology development, population growth, and rising lard consumption by the bread industry are all contributing to the expansion of the global edible animal fat market in this region. In developing regions like the Asia-Pacific, where lard is more frequently used in baked goods than butter, demand has been stoked by this trend. China has attained self-sufficiency in the production of lard and pork. The demand for edible animal fat in the region has grown due to a rise in the consumption of processed foods that use lard.

To identify and estimate the market size for the global edible animal fat market segmented by raw material, form, source, and application by value (in US dollars). Also, to understand the consumption/demand created by consumers of edible animal fat between 2022 and 2030

To identify and infer the drivers, restraints, opportunities, and challenges for the global edible animal fat market

What is the growth rate of the global edible animal fat market?

The global edible animal fat market is growing at a CAGR of 4.50% over the next 8 years.

Which region has the largest share in the global edible animal fat market?

Who are the key players in the global edible animal fat market?

Edible Animal Fat Market likely to rise with 4.50% ,due to increase in culinary and other purposes