Please note that the assessment period of report has been updated from 2016-2023 to 2020-2027. Cordially fill the sample form for updated data. 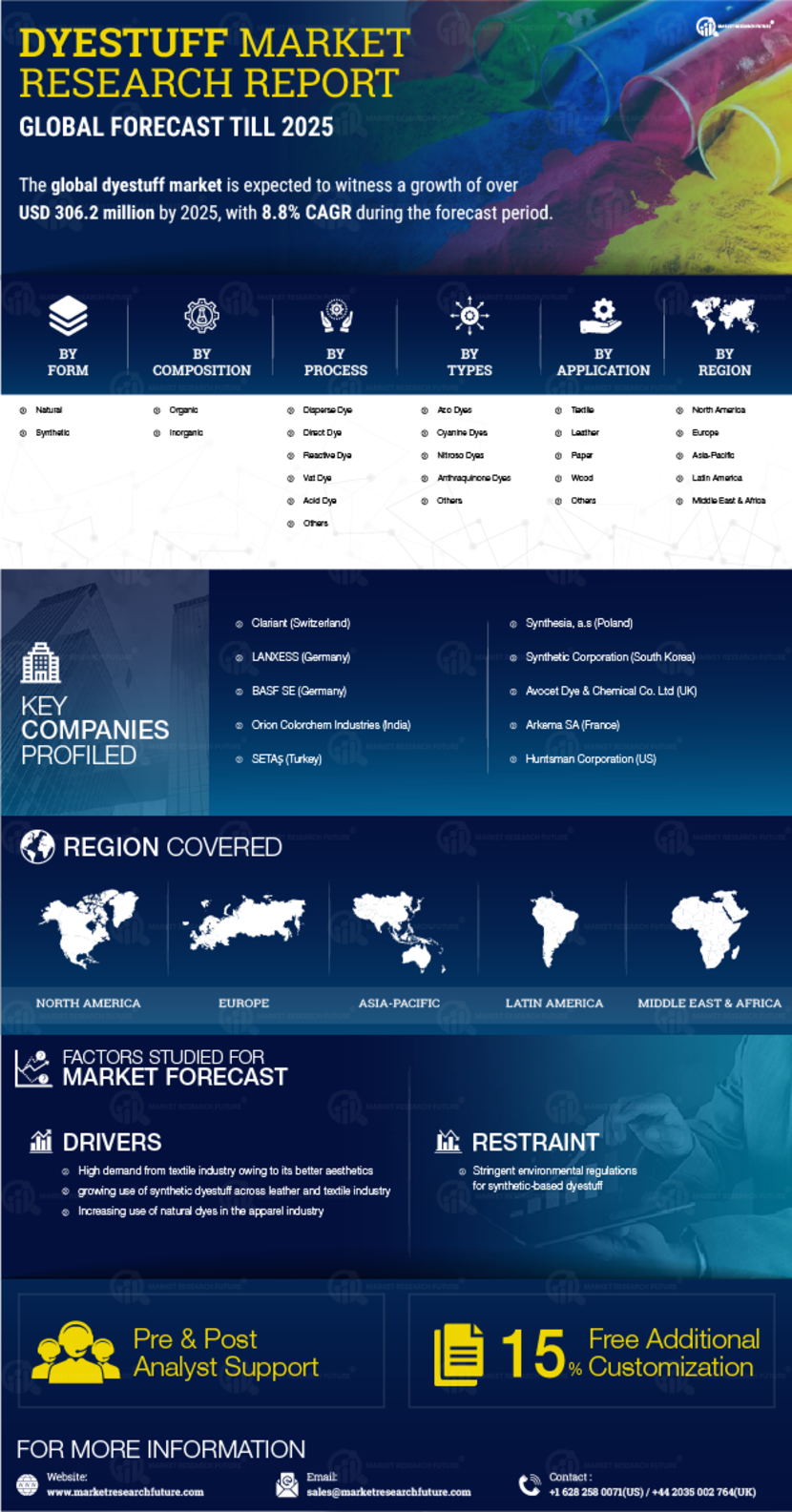 The global dyestuff market is expected to witness a growth of over USD 306.2 million by 2025, with 8.8% CAGR during the forecast period.
Dyestuff are organic or inorganic and water-soluble substances that absorb light and reflect some of the light to show color. A dye can be described as a coloring substance when applied on specific materials helps them to change the color of the material permanently. It is majorly used for coloring fabrics. Some of the end-use industries that widely use dyestuff are leather, textile, and paper. The demand for dyestuff is expected to increase during the forecast period as it provides better aesthetics to its textile product, which makes them more attractive. Moreover, the increased use of natural dyes in the apparel industry is expected to be a major boost for the growth of the dyestuff market in the review period. In the chemical industry, dyestuff plays an important role, which enhances the growth of the chemical market. The applications and production of dyestuff are some of the oldest activities in the chemical industry. However, synthetic dyestuff is expected to gain major traction in the forecast period due to its excellent technical and performance properties. Thus, owing to these factors the dyestuff market is expected to gain significant traction during the forecast period.
The increasing global dyestuff market is primarily driven by the growing use of synthetic dyestuff across various end-use industries. These dyes are increasingly being used to improve the performance and appearance of textiles and apparels, along with growing awareness in the industry for the quality of textile and colored fabric materials. Synthetic dyestuffs hold a large share of the global dyestuff market and are available in several types, such as azo dyes, cyanine dyes, nitroso dyes, anthraquinone dyes, nitroso dyes, and other. The different types of dyes have various functionalities and are processed accordingly. For instance, acid dyes are used for leather and silk fibers; disperse dyes are mainly used for synthetic fibers; reactive dyes are best suited for cellulosic fibers or cotton textile; vat dyes are used for blended fibers; textile dyeing is employed to recycle used textiles; and sulfur dye is used primarily on the fiber with low brightness. Thus, these unique characteristics of all the dyes are expected to boost the market demand during the forecast period.
However, the stringent environmental regulations for synthetic-based dyestuff serves as a major restraining factor for the dyestuff market during the review period.

Asia-Pacific is the largest region for dyestuff market due to its demand in various industries, including textile, leather, and paper, in countries such as China, India, Japan, and South Korea. Increasing demand for textile industry in China, India, Taiwan, and South Korea has made the region the largest consumers of dyestuff. The growing industrialization and urbanization activities in the region is another factor for the increase in demand of dyestuff market in the region during the forecast period. Countries in Asia-Pacific are enticing major foreign players owing to its low raw material and labor cost. Additionally, the textile industry in the region is witnessing technological improvements and innovation, coupled with strict government regulations towards environmental safety and protection. These regulations have allowed the manufacturers to operate through eco-friendly dyes, thus increasing the demand for dyestuff in the region.
Europe is expected to be another prominent market for dyestuff. The growth in the region is backed by the increasing demand for aesthetic apparels in the region. The North American market is projected to witness steady growth during the forecast period, owing to the rapid growth of the furniture and leather market. Latin America and the Middle East & Africa are expected to have significant potential for the dyestuff during the review period.

What is the valuation of the dyestuff market?

The global dyestuff market is expected to reach a valuation of USD 306.2 million by 2025.

What is the expected CAGR of the dyestuff market?

The global dyestuff market is expected to exhibit a strong 8.8% CAGR over the forecast period from 2019 to 2025.

What are the major applications of dyestuff?

Leading application segments of the dyestuff market include textiles, leather, wood, paper, and others.

What is the leading regional market for dyestuff?

The leading regional market for dyestuff is Asia Pacific, due to the growing textile, leather, and paper industries in the region.

What are the leading players in the dyestuff market?

Leading players in the dyestuff market include Lanxess, Clariant, BASF, Synthetic Corporation, Synthesia, Arkema, and Huntsman, among others.

Dye Stuff Market To Experience Phenomenal Growth With 8.3% Cagr By 2023