The global market for drive system has been witnessing significant growth in recent times. The growing vehicle production across the globe has been aiding the market.  In addition, stringent regulatory norms, especially in Europe has fueled the growth of the market. Rapidly rising demand for high fuel efficiency and transmission system has evolved to provide better vehicle performance. Manufacturers of drive systems are competing to develop fuel efficient systems without compromising on the performance of vehicle. Automatic transmission is preferred over manual transmission, and the reason behind the inclination towards automatic transmissions, is fuel efficiency, increased power, and better comfort level. With major manufacturers adopting advanced technologies to keep pace with the leading manufacturers in the automotive industry, the market for drive system is poised for rapid growth during the forecast period. Factors such as increase in use of alternative fuel such as ethanol and the increasing trend of engine downsizing, are driving the market of drive system for automotive. Increased investment in the automotive industry across the globe encourages various manufacturers operating in the automotive industry. The stringent emission norms are also driving the market for drive system market.

However, high cost of advanced transmission systems is a major restraint in the growth of market.

Asia Pacific is the second largest market in the global automotive transmission market owing to factors such as growth in the production of passenger cars and LCV in the developing economies. Many OEMs are keen to open their production facilities, in this region, especially in the emerging nations such as China and India. The market has been experiencing rapid growth due to the rising sales of passenger cars, and the emerging economies where the global players are shifting. Technological advancements are also giving a much needed thrust to the Gasoline Direct Injection (GDI) systems market. Rampant rise in vehicle production in the Asia Pacific region is also expected to be majorly contributing in the growth of the drive system market. 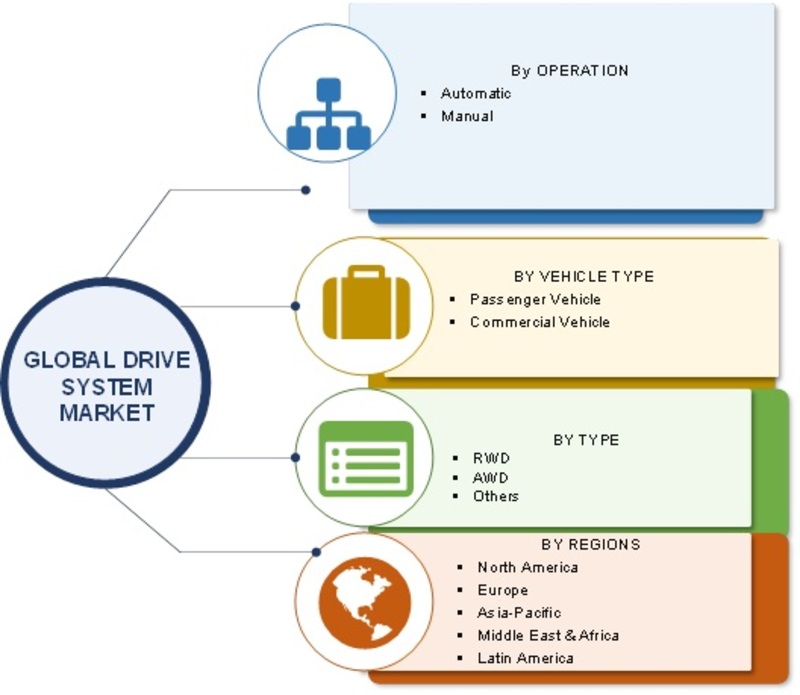 
The report for Global Drive System Market of Market Research Future comprises of extensive primary research along with the detailed analysis of qualitative as well as quantitative aspects by various industry experts, key opinion leaders to gain the deeper insight of the market and industry performance. The report gives the clear picture of current market scenario which includes historical and projected market size in terms of value, technological advancement, macro economical and governing factors in the market. The report provides details information and strategies of the top key players in the industry. The report also gives a broad study of the different market segments and regions.

Who are the major market giants operating in the global drive system market?

Which type segment of the drive system market is observing the fastest growth?

The RWD segment is expected to drive market growth over the review period.

Which vehicle type segment of the drive system market is expected to witness the highest demand?

The passenger vehicle segment is expected to witness the highest demand in the drive system market.

Which is the leading region of the drive system market?

The north American region is anticipated to witness the highest growth.

What is the prominent operation of the global drive system market?

The automatic segment is slated to witness higher growth over the assessment period.