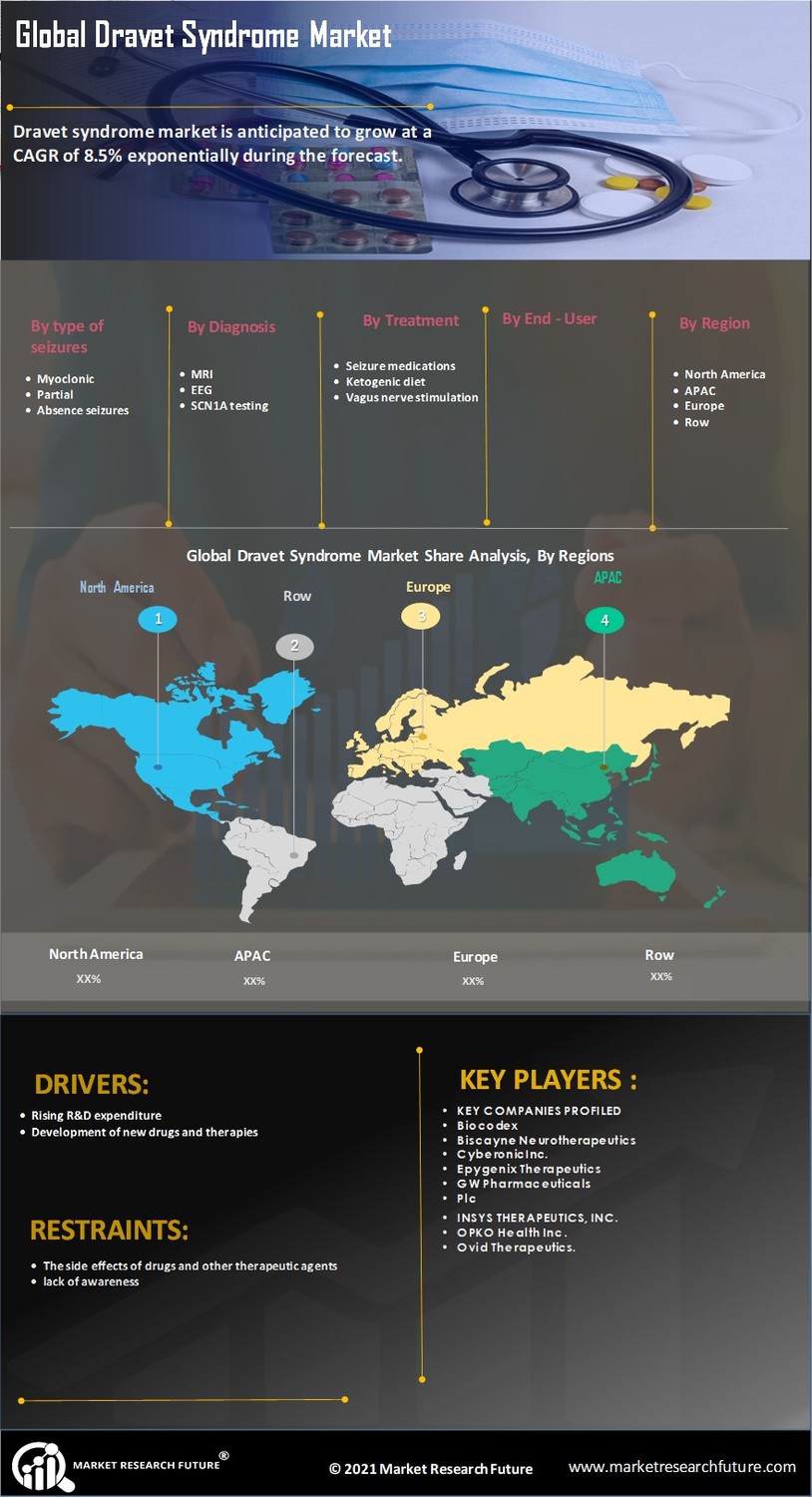 Generally, dravet syndrome is considered a severe type of epilepsy characterized by the triggering through the occurrence of fevers or some kinds of higher temperature. Dravet syndrome is a kind of extremely rare dysfunction of the brain, and once it happens, it will stay for a long time. Several people get confused because they do not know when such a disease occurs in their bodies. This disease first occurs in childhood time. In contrast, in the present time, lots of progress in the advance medical facilities such types of disease can be easily eliminated from you.

The Dravet Syndrome market is now on the growth path, which is led by the rising incidence of several diseases, rapid growth in the aging global population, and increasing medical sectors. The global medical sector requires detecting and treating such types of diseases. The growth of the medical equipment manufacturing industries and the high-tech research facilities also increased tremendously in the present time. Whether the laboratory needs testing equipment or surgical accessories, every professional medical needs a piece of better in-hand equipment to perform the proper treatment for the patients. Due to this, several regions are now focusing on manufacturing extensive numbers of industrial plants to fulfill such demands. Many companies also continuously focus on developing new medicare and pharma drugs and improved medical facilities for the patients. The global market also significantly increased due to such incidence. Accordingly, the dravet syndrome market size also contributes to the major trading partners investing in these industries. At the same time, most major manufacturers are focusing on the production rate to meet the excessive challenge according to the global demands.

According to the Dravet Syndrome market analysis report, this industry has crossed a huge milestone due to the recent demand for medicines and cure products. Developing new products and improving emerging medical technology allows several nations to perform significant improvements for their industrial sectors. It typically raises a huge effect on the dravet syndrome market value. As a result, the on-growing confidence in the medicine efficiency and all the clinical evidence has also provided a strong business for such facilities.

The outbreak of the COVID-19 has placed a significant impact on the dravet syndrome market growth. Due to the lockdown, several companies have been affected by the stoppage of production work. Some of the major industrial sectors have continued their production work, but the amount of production work has been slow due to the lack of raw materials and insufficient labor. For the emergence of the global pandemic, several regions have pushed the restriction of lockdown procedures on the entire nation. For which, the international business and market sectors have faced a huge loss. Thus, the stoppage of international commercial activities maximum investors has been faced a huge loss in their investment and the business sectors. Every company and industrial facility wants to provide a huge production during this lockdown. Still, the labor cost and the cost of raw materials do not give them a chance to meet the perfect opportunities of global demands.

However, the factors affect more while the new competitors come up in the market. Due to this, the rising global market infrastructure has grown tremendously. But during the lockdown, the rate of every production work and the research and laboratory manufacturing facilities have been placed slowly due to the stoppage of raw materials and cargo ships. These things ultimately directly impacted the dravet syndrome market value and the entire stock market.

The Chief Factors Existing in the Market:


In the present situation, everyone is much more acquainted with serious health awareness, and that is the main reason which gives a clear path to the market’s most key players to increase their production rate. All the challenges have also come, but these players stand out in this situation, and due to this, the dravet syndrome market demands have been raised significantly.


Many complicated situations have also come in the industrial sectors but nothing compared with the global epidemic. This disease shows everyone an era of changing the world. Due to the global stock market crash, several investors and major business players wanted to overcome this situation, a huge challenge for every industrial sector.


Just after the lockdown, the market has been facing a huge market opportunities situation in the world. Most of the new market players have come up in the market while the investors and stockholders want to invest and gives them opportunities for the market’s most new faces to compete in this modern world.


Due to the changing of global financial policies during the lockdown, the dravet syndrome market has been facing a huge challenge to overcome from this serious time. However, due to this, the cost of raw materials and other industrial equipment has been increased so far. The insufficient labor and other useful materials have also grown the major market restraints.

Everybody wants a better life. But such serious diseases always take these people towards the medical sector. While in this modern age, several numbers of advanced medical equipment and medicine facilities have come out for which all the diseases can be controlled so easily. But during the lockdown period, many companies could not continue their factory production work. In some cases, the lack of raw material and insufficient labor also affect more in this industry sector more. To meet the global challenge during the lockdown periods, some of the new market players have been placed in the global market to set the business and fulfill the specific demand of the global hospital and medicine sectors. Every manufacturer wants to double their production rate in the laboratory and any other medical equipment.

According to the worldwide Dravet Syndrome market report, the entire market has been segmented into five sections seizures, diagnosis, treatment & management, end-user and regional sectors. According to the seizures section, the market has been divided into seven forms: myoclonic seizures, atonic seizures, partial seizures, absence seizures, tonic-clonic seizures, photosensitive seizures, and others. On the basis of the diagnosis sectors, it is further classified into four patterns magnetic resonance imaging, electroencephalography, SCN1A testing and others. In the treatment & Management section, the market is divided into four sections such as seizure medications, ketogenic diet, vagus nerve stimulation and others. This seizure medication is further subdivided into four sections clobazam, stiripentol, sodium valproate and others. According to the end-user segment section, the Dravet Syndrome market is classified into five categories: pharmaceutical companies, hospitals, diagnostic laboratories, academic and research institutes, and others. The regional sectors are further classified into five bases Asia-Pacific, Europe, South America, North America, and the Middle East & Europe.

Just followed by Europe, North America is the largest global market for dravet syndrome at the present time. The market is expected to reach a huge proportion during the estimated period of time. Within the Asia-pacific section, Japan has been expected to hold the largest share of the dravet syndrome market sectors. Not only the expectation of the analysis report but also such regions give several industrial and manufacturer to opportunities to place their business and prove the production rate. Several regions have considered making the largest business sectors to increase the market infrastructure, especially to meet the specific challenge and the demands of the market sectors. Ultimately, these things can easily generate a huge production rate as well as helps to grow the global market significantly.

Due to the extensively rising competition level in the market, numerous market players have come up in the market to place the business and generate more production. According to this, the global stock market and the share values of such Dravet Syndrome market sectors have also increased so far. Industrial facilities always demand raw materials and qualified labor, which helps to generate more production. Just after the release of lockdown, the dravet syndrome market has been facing the most significant challenge for the production work. Most of the investors also want to give a chance on the market’s most efficient players to compete for the present market conditions.

The entire study report highlights the dravet syndrome market and its effect as well as all the symptoms & treatment of the several market sectors. The reports also focused on the regional section and all the market segmentation. Industries most key players, even the new faces in the modern market have also informed in this report. The report also presents a detailed study of the market key factors and the impact of the global pandemic on the market.

At what CAGR is the Dravet syndrome market projected to grow in the forecast period (2022-2030)?

Dravet syndrome market is projected to grow at approximately 9.20% CAGR during the assessment period (2022-2030).

What are the major tailwinds pushing the growth of the Dravet syndrome market?

What are the key growth impeders of the Dravet syndrome market?

Side effects of drugs and other therapeutic agents, lack of awareness in the developing countries, and poor healthcare system are major growth impeders for the Dravet syndrome market.

Which region holds the largest share in the Dravet syndrome market?

North America holds the largest share in the Dravet syndrome market, followed by Europe and the Asia Pacific, respectively.

Who are the top players in the Dravet syndrome market?

Dravet Syndrome: Increasing development of new drugs is projected to boost the market growth at a...