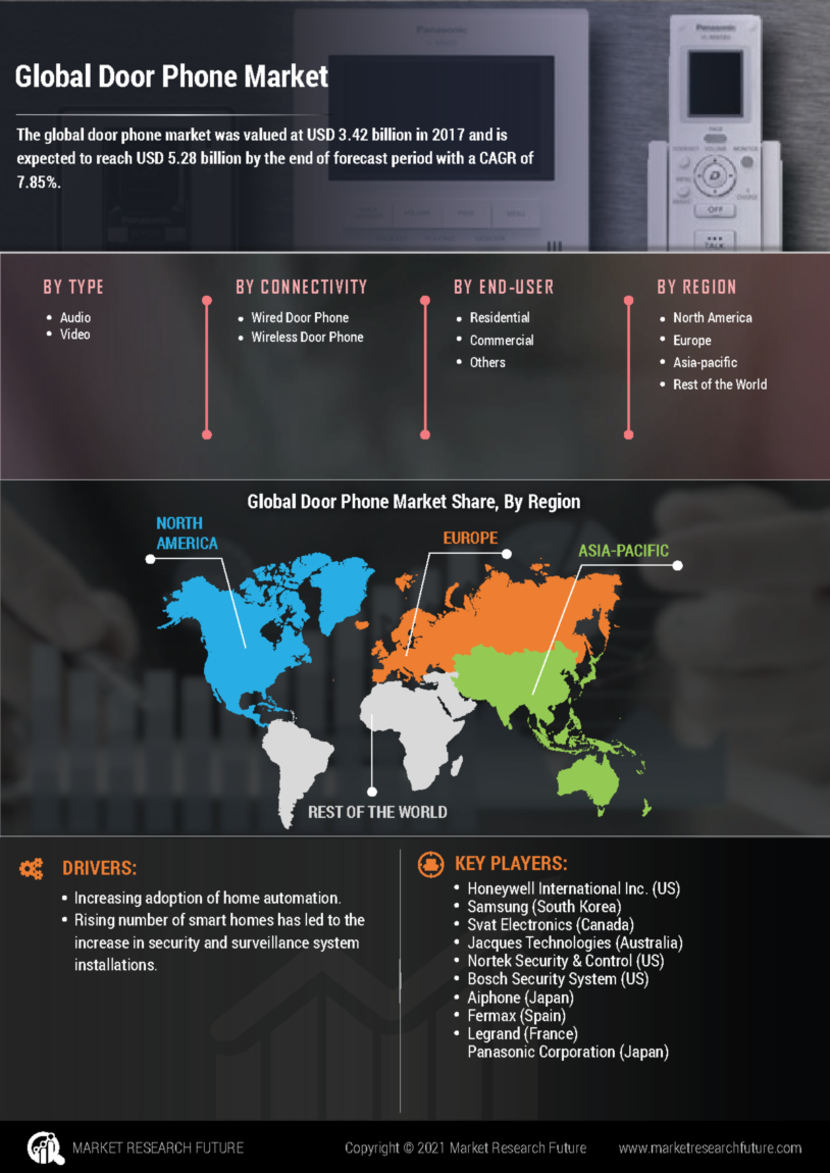 Increasing adoption of home automation and rising number of smart homes has led to the increase in security and surveillance system installations. Growth in urbanization is leading to people moving into large multi-occupancy buildings. These buildings require secured entry such as door phones, surveillance cameras among others. Therefore, this is one of the major factors that would drive the demand for market. Door phones provide two way audio and video communication with the visitors. These can also be paired with apps using which the audio call/video call can be transferred to the person’s smartphones and tablets and they can control whether to open the door or not, even when they are not at home.

The government of several countries are implementing policies for home security solutions which further boost up the demand for door phone market. Also, increasing number of smart cities projects globally is the major driver for door phones market. Under smart city initiaves, security and surveillance for residential and commercial purpose has been an important focus area and companies are investing in developing innovative solutions.

By type, the market is segmented into audio and video. Audio door phone segment contributes to the largest share in the door phone market while video door phone is expected to grow at the highest CAGR during the forecast period. This is majorly due to increasing installation of video door phones in smart homes.

The global market for door phone is estimated to grow at a significant rate during the forecast period from 2018 to 2023. The geographical analysis of door phone market is studied for North America, Europe, Asia-Pacific, and the rest of the world (including the Middle East, Africa, and Latin America). Among the regions mentioned, North America is expected to dominate the door phone global market. In the North America region, US will continue to dominate the market owing to several factors. This includes rapid adoption of advanced technologies, growth of home automation, and a number of vedors based in this region.

North America is followed by Europe, which is experiencing high growth in smart city projects in various countries. European Innovation Partnership for Smart Cities and Communities (EIP SCC) has aimed to implement smart city projects in 300 cities. This is expected to create immense opportunities for market of door phone.

Asia-Pacific region is expected to grow at a significant CAGR during the forecast period. Asia-Pacific is expected to become major hub for home automation which will create lucrative opportunities for door phone market. Increasing application for connected technologies for security will boost the demand for global market of door phone in this region. 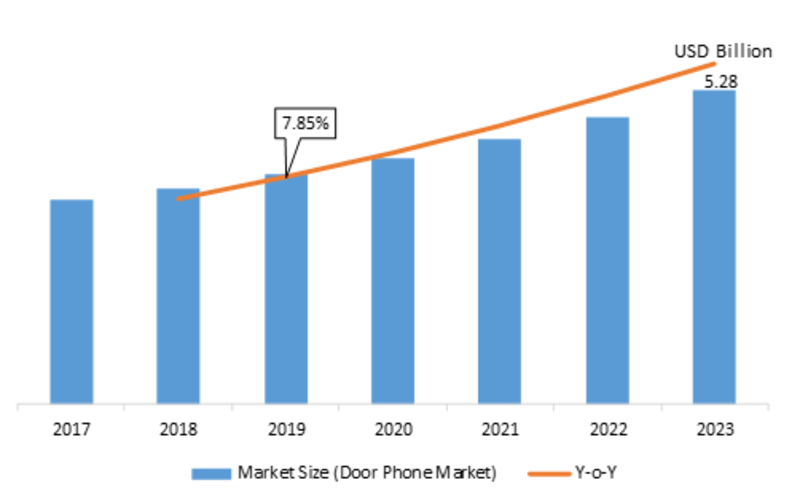 The key players in the door phone market are identified across all the major regions based on their country of origin, presence across different regions, recent key developments, product diversification, and industry expertise. Some of them are – Honeywell International Inc. (US), Samsung (South Korea), Svat Electronics (Canada), Jacques Technologies (Australia), Nortek Security & Control (US), Bosch Security System (US), Aiphone (Japan), Fermax (Spain), Legrand (France), and Panasonic Corporation (Japan).

Apart from the top key players, there are other players that contribute to the market growth. These include Commax. (South Korea), Zicom (India), MOX (Australia), Godrej (India), and others.

What is the future valuation of the market along with growth rate.

The global market for door phone is going to expand at a CAGR of 7.85% and would be gaining USD 5.28 billion valuation in the future.

Back in 2017, what was the valuation provided in the research study of market?

Mention the key driver of the market.

Increasing adoption of home automation and intensifying number of smart homes has led to the rise in security and surveillance system installations, thus affected global market for door phone.

What are the regions included in the study of the market, globally?

North America, Europe, Asia-Pacific, and the rest of the world are the key regions chosen for practicing research for the market’s growth.

Why is Asia Pacific region is turning to be the most grossing region to occupy market shares?