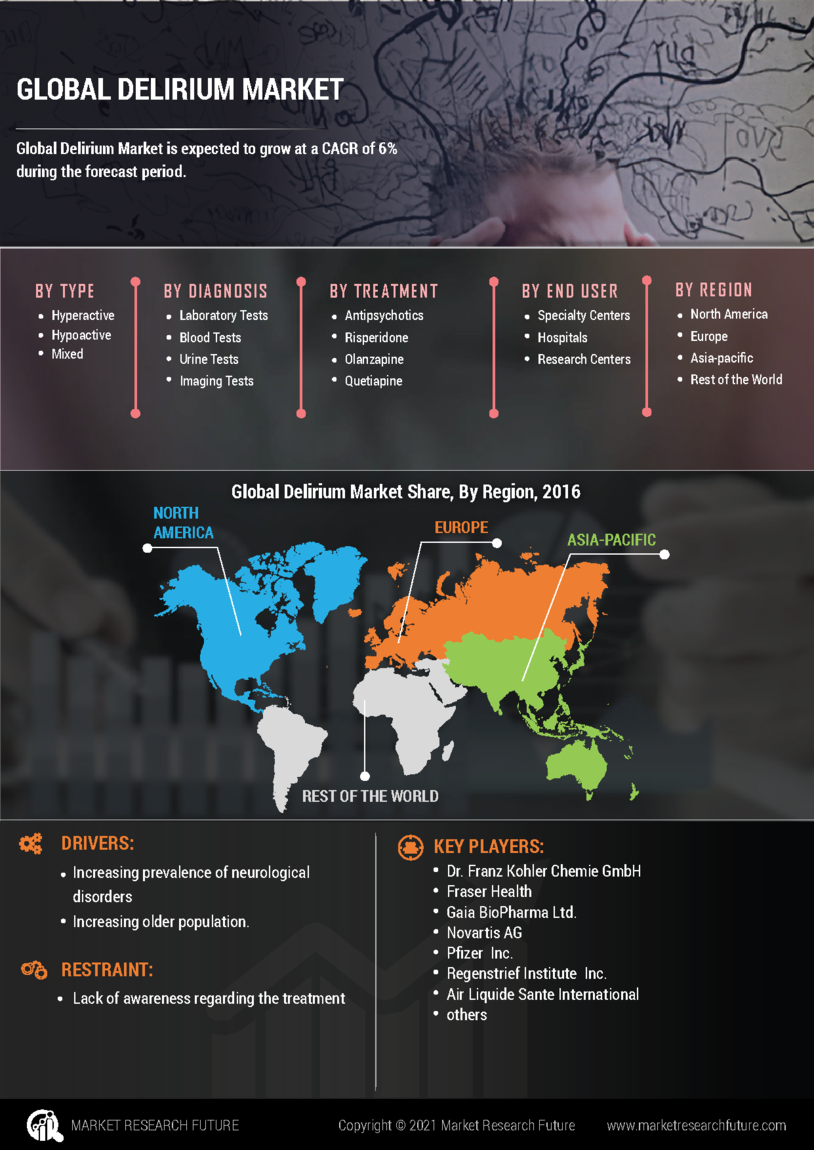 The Delirium Market is expected to reach USD 365.7 Million by 2030 at 5.70% CAGR during the forecast period 2022-2030. Delirium is termed as a neurological condition, and it disturbs mental abilities such as emotional disruption and mental confusion. Delirium majorly happens due to various factors such as exposure to limited medication, older age, alcohol abuse, surgeries, and more. On the other hand, due to medical procedures, factors relieving the medical exposure mainly include the toxic agent, trauma, infectious agent, diet, behavioral occupational factors. According to the overview of the delirium market, it has been majorly driven by an increase in the prevalence of neurological disorders. Additionally, it mainly includes government initiatives, an increase in the programs that tends to create awareness. Further, the market players attempt to offer advanced items for driving the mentioned market growth. Apart from that, the UN has stated that in 2017, over 962 million people have been aged 60, and globally, this nation has estimated that the population will reach approx. 425 million by the forecast period. Hence, it claims that the rising population likes to propel the market growth for better analysis of the treatment of the aged population globally.

The covid 19 impact on the global DM has closely monitored the industry and it depicts that the entire impact has been negative to the world. According to the delirium management team, the demand has not been normal during the pandemic situation and it has anticipated the growth sharply during the mentioned period. Due to strict lockdowns, business activities have been hampered and the situation has severely attacked the mental health of the laborers. Therefore, after the onset of the corona situation, many of the companies have been shifted from work to home to deal less with the stress. Thus, the delirium market has launched the advanced drug dose for the patients to tackle the neurological disorders during the pandemic.


The major challenges faced by the market states that there has been a consideration detail of underdiagnosed as well as under-recognized. This stages the underlying mechanism along with the potentiality of the treatment for preventing the targets. Apart from that, the features along with the management of the clinic appear to be facing the delirium causes of the unclear arena. Apart from that, delirium has the access to wane and wax the market and that attempts to provide a baseline to the cognitive status of the firm.


The major key opportunities of this market stage are the importance of the government initiatives and that has been increasing in nature. An increase in the programs also tends to create awareness of the delirium market globally. Further, the market players have been playing a major role that offering advanced products for the market worldwide.

The Compound Annual Growth Rate (CAGR) is predicted to grow at 6%. Accordingly, the market growth has tried to expand its growth within the forecast period of 2017-2023. Various drivers such as the increased prevalence of the neurological disorder as well as the increase in the older population.

An increase in the adoption of new diagnoses has given a rise in the market. Hence, this has contributed to the entire overall impact on the market positively. Also, the growing initiatives by the government for the development and research will improve the value chain of the Delirium Market in the upcoming years.

According to the market segmentation, the delirium market has been based upon the treatment, diagnosis, type, end-user, and region. Therefore, based on treatment, the focused delirium market has been classified into antipsychotics and supportive care units.  Further, antipsychotics have been sub-segmented into olanzapine, risperidone, and quetiapine.

Based on the type, the market has been segmented into hypoactive, hyperactive, and mixed for better classification.

Based on the diagnosis, this particular market has been segmented into imaging tests, laboratory tests, and also physical examinations. On this basis, it is further sub-classified in urine tests, and blood tests for better analysis of the market.

Lastly, based on end-user, the market segmentation includes the hospitals, research centers, and specialty centers as well.

In this section, the regional analysis of the delirium market has been based upon the segmentation of the four different regions. The North American market of delirium has been considered as a growing market and on a particular regional basis, America has been segmented into South America and North America. Further, North America has been segmented into Canada and US. Hence, the increasing prevalence of the market has been affected by the population that drives the growth of the market. Apart from that, Europe has been considered as the second-largest market that holds a healthy share of the worldwide market. China has been considered as the fastest region in the growing analysis of the market due to the increased population of elder people and also the rise in the patient population. Asia-Pacific has expected to be considered as the fastest market in the growing region because of the increased prevalence of the chronic disease. Lastly, the Middle-East and the United Arab Emirates to be the largest market which owns the rise within healthcare development.

The stated delirium market has been fragmented with numerous players within the competitive market that attempts to obtain the highest position. According to the Research & Development, an important role has been played by the market that explores the novel insights within this market. Hence, some of the major key players of the market state to:

This report mainly includes all the details and it tends to initialize the growth along with better efficiency of the market with particular management. It states that the driving factors have been interrupted due to the sudden covid 19 situations. The entire analysis is based upon the Covid 19 analysis, regional analysis, market overview, segmentation analysis, market dynamics and it mainly includes the challenges, opportunities, restraints, and drivers. Further, the competitive landscape and the other sections are presented. Hence, all of the information that has been collected is from the primary as well as the secondary sources.

Delirium: The increasing prevalence of delirium and the rising older population are likely to dri...