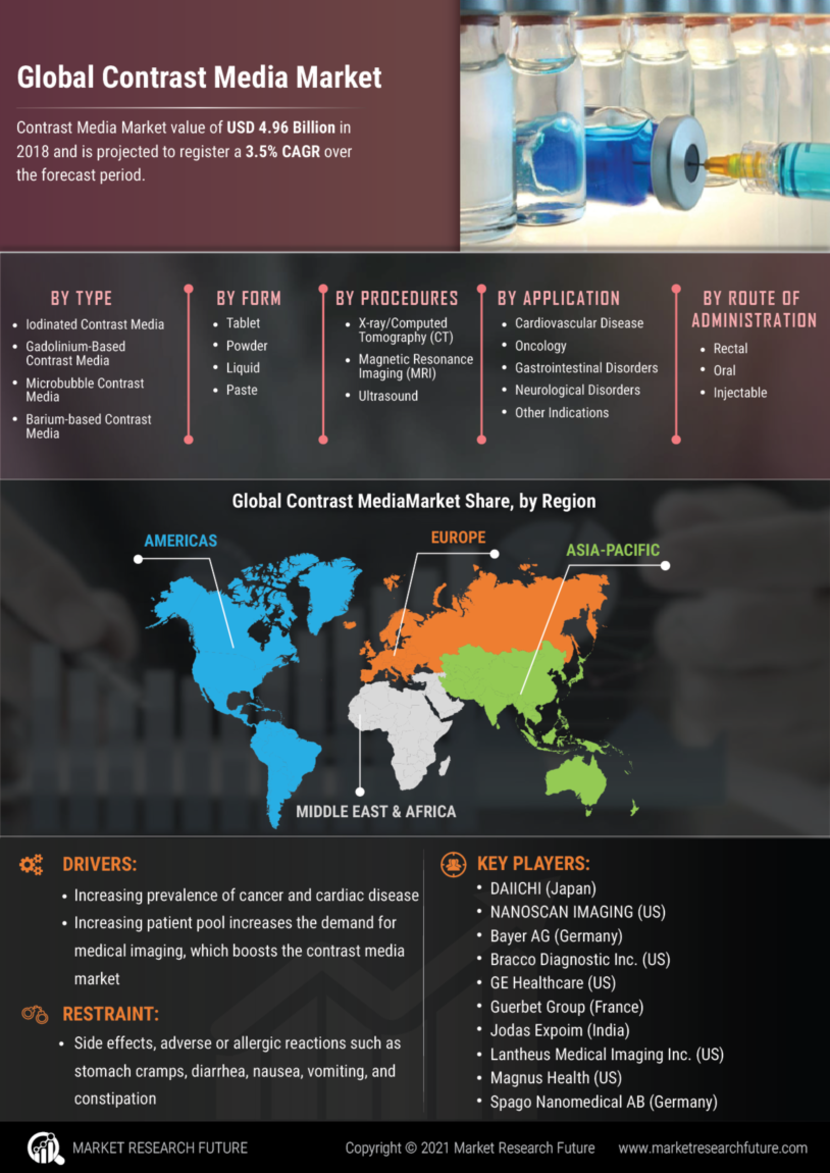 In 2018, the Contrast Media Market was estimated to increase at USD 4.96 Billion. Further, the global market is expected to generate a 3.5% CAGR for the forecast period of 2025. Contrast media are extensively used to distinguish normal conditions from the abnormal conditions of the patients. Contrast media are also known as contrast agents. Before imaging the examination, the contrast agents are used as the chemical components that are introduced into the patient’s body to understand the health condition.

The global contrast media in radiology market has been segregated into procedures, type, form, route of administration, and application. If looking into the various regions of the global market, it has segmented into different countries. The American region of the Contrast Media Market has been further divided into Latin America and North America. Moreover, the Contrast Media Industry of North America has further sub-segmented into Canada and the US. The market of the European region has been classified into Eastern Europe and Western Europe. Moreover, Western Europe has been further sub-divided as the UK, Germany, France, Spain, Italy, and the rest of Western Europe. Along with that, the Contrast Media Market of the Asia-Pacific region has been classified into India, Japan, China, Australia, Latin Korea, and the rest of Asia-Pacific. Further, the Middle East & African region of the global market has been divided into the Middle East and African countries.

The MRI contrast agents market report highlighted the recent growth and developments of the global market. Recently, in November 2019, the Food and Drug Administration (FDA) of the US has approved GE Healthcare for intravenous use with the gadolinium macrocyclic-based and Clariscan (adulterate meglumine) anionic contrast agent injection. In addition, in September 2019, the Medrad Stellant Flex CT injection system was introduced by Bayer AG to manage contrast dose. Along with that, the products demands are increasing due to the purchasing power of the intended audience. These intended audiences are Hospitals and diagnostic centers, ambulatory surgery centers, medical device manufacturing companies, Academic centers, distributors and suppliers of medical devices, and Venture capitalists.

The global COIVID-19 has impacted the global Contrast Media Market due to the global lockdown in different regions. The people avoided visiting the health sectors for medical imaging, which has reduced the demand for the global market.

But the continuous efforts of the global key players have lifted the demands for the global market in the pandemic situation.

Moreover, the key players are giving more focus on the growth driving factors to develop the products.

Moreover, the marketing companies of the global Contrast Media Industry are introducing new advanced technologies and quality products with advanced features. This can bring more opportunities for the global market.


The major factors like side effects, allergic reactions, or adverse reactions such as diarrhea, stomach cramps, nausea, constipation, and vomiting might hamper the growth of the global Contrast Media Industry.

Hence, the global market is employing professional manufacturers to look into these major restraints.


The global Contrast Media Industry might face challenges due to the rising cost and side effects.

Hence, the global key players are working on these emerging challenges to combat this in a very short period.

The regions like North America, European regions are contributing higher to the global Contrast Media Market, which shows the increasing regional growth will bring more opportunities for the global key players of the market.


The global Market has been classified into liquid, tablet, powder, and paste based on the form segment.

These all forms are preferred by the intended audiences according to the requirements of the products.


Based on the procedures segment, the contrast media allergy market has been divided into magnetic resonance imaging (MRI), X-ray or computed tomography (CT), ultrasound, and others.

They discussed important procedures that are increasing the demands for the global Contrast Media Industry.


On the basis of application segment, the Market has been classified into oncology, cardiovascular disease, neurological disorders, gastrointestinal disorders, and other indications.

Hence, the contrast media manufacturers are getting more opportunities with the increasing applications.


On the basis of route of administration segment, the Market has been classified into injectable, rectal, and oral.

Among these, the injectable route of administration is aimed to grow the global Contrast Media Industry.

The radiographic contrast media market has been divided into various regions such as the Americas, the Middle East & Africa, Europe, and Asia-Pacific. Among these, the American region is expected to rule the global contrast agents market due to the growing preferences for the diagnosis of people suffering and various health conditions like intestinal diseases, spinal injury, brain problems, cancer, and other diseases. Moreover, the growing demands for medical imaging are bringing scope for the global contrast media/contrast agent market.

The European region is predicted to register the Contrast Media Market in the second-largest position. This region is growing the product demands due to the growing healthcare expenditure, the presence of more medical device companies in the region, and the increasing economy of the region. Apart from that, the Asia-Pacific region is estimated to be the contrast agents market’s fastest-growing region due to the growing fractures, spinal problems, and health issues among the geriatric population. Here, it shows that the increasing patient pool is growing the medical imaging demands among the population and enhancing the global market growth in the region. Further, the Middle East & African region is predicted to generate very little of the market shares. However, this region might drive the growth of the Contrast Media Market for the upcoming years due to the increasing number of hospitals, diagnostic centers, and clinics in the region.

The Contrast Media Market has significant major players across various parts of the countries. These significant key players are:


These contrast media companies are the pillar of the global contrast media market. These key players are creating better outcomes by implying different marketing strategies and methods.

Further, the report has given emphasis on the market segmentation, market overview, and market dynamics to explain the details of the current challenges, restraints, competitions, and growth of the global Contrast Media Industry.


By Route of Administration:

What was the value of the global contrast media market in 2018?

The global contrast media market had reached to a valuation of USD 4.96 BN in 2018.

At what CAGR is the global contrast media market projected to grow during the forecast period (2017-2023)?

What are the major tailwinds pushing the growth of the global contrast media market?

Which region holds the largest share in the global contrast media market?

Who are the top players in the global contrast media market?