Please note that the assessment period of the report has been updated from 2017-2023 to 2020-2027. Cordially fill Sample form for the updated data.

Companies such as iRobot Corporation (U.S), Samsung Electronics Co., Ltd. (South Korea), LG Electronics Inc. (South Korea), Hasbro, Inc. (U.S), WowWee Group Limited (Hong Kong), Parrot SA (France), Google Inc. (U.S), are the leading providers of consumer robotics solution in the global market. The adoption of handheld computing devices including smartphones, tablets, smartwatches, and others are propelling the market. Mobile devices offer an opportunity to outsource computing devices. On Oct. 2, 2017, iRobot Corporation has expanded its operations with the acquisition of Robopolis SAS. The company has expanded its business in Europe to provide service across the world.

The emergence of artificial intelligence, human-robot interaction, voice and speech recognition, gesture control, machine vision, tactile sensors, machine learning, and others, which are driving the market growth. Moreover, Wi-Fi and sensors are widely used in consumer robotics. The high price of robots is the major restraint in the consumer robotics global industry. There is a number of services availed to automate various consumer activities including vacuuming, cleaning dirty kitchen floors, entertainment among others. On Dec. 18, 2017, iRobot Corporation has gone into the agreement with Black & Decker to discontinue sales of all home robotic vacuums for a certain period of time after selling through its existing inventory. 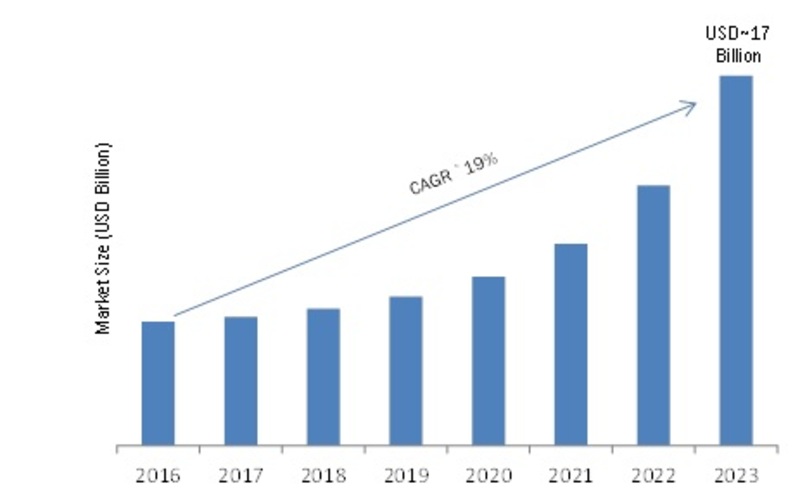 The regional analysis of consumer robotics global market is studied for regions such as Asia Pacific (China, Japan, and India), North America (the U.S., Mexico, and Canada), Europe (the U.K, Germany) and Rest of the World. North America is one of the leading regions of the world in terms of market share. The market of consumer robotics in this region has a huge demand due to the technological advancements in robotics, which is propelling the market growth to a large extent. The market in Europe for consumer robotics is expected to witness rapid growth in the forthcoming period due to huge demand for sensors in this region. Whereas, Asia Pacific countries such as China, Japan and India is an emerging consumer robotics sector, which is expected to grow at the highest CAGR in the coming years. China is a major hub for electronics devices, which is boosting the market growth of market to the large extent.

What is the projected size of the global consumer robotics market?

The global consumer robotics market is expected to grow to a size of USD 17 billion by 2023.

What is the growth rate of the global consumer robotics market?

The global consumer robotics market is expected to expand at a CAGR of 19% during the forecast period (2020-2027).

What are major drivers of the global consumer robotics market?

Which region can lead in the global consumer robotics market?

North America can lead in the global consumer robotics market.

Who are the key players of the global consumer robotics market?