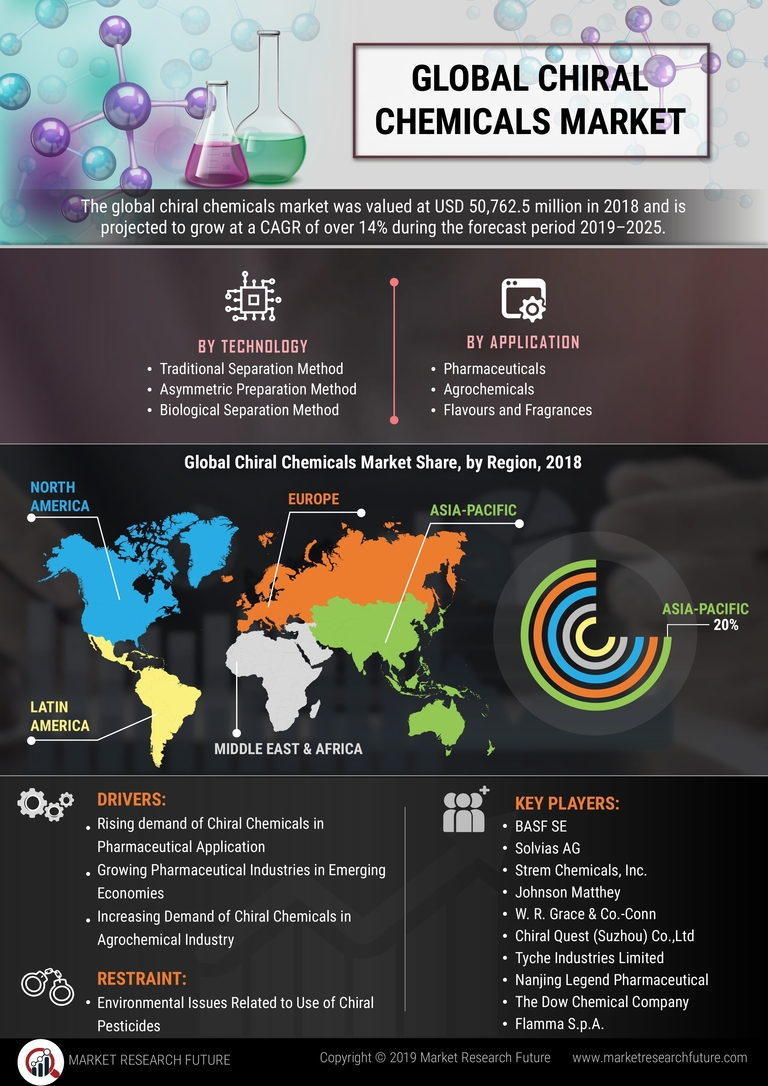 A compound which exhibits chirality that is not superimposable on its mirror images is called as chiral compound. It comprises of carbon atom at center attached with four different substitutes. The right hand and left-hand configurations are called as enantiomers. In addition, the stereo center of chiral molecule may not be only carbon atom, it may also consist of tetravalent phosphorus and trivalent sulphur compounds. Enantiomers possess same physical properties, but difference exist in direction of rotation. The prominent application of chiral compound is in pharmaceutical industry. Owing to its effects and superior properties, chiral chemicals used in pharmaceutical industry differs in pharmacology and effects on biological organisms. Commercially, the separation of enantiomers is difficult and usually separated by different processing methods such as traditional, asymmetric and biological method. Over the forecast period, traditional separation method to remain largest dominating technology segment.

The outbreak of COVID-19 has significantly impacted the chemicals & materials supply chains, international trade, and manufacturing operations across the world. As a result of a lockdown across geographies, the production facilities have faced disruptions. The market players have had to shut production facilities or operate the facilities below the optimal production capacities to avoid the spread of COVID-19. All this has caused severe disruptions in production and trade restrictions, significantly affecting the supply of Chiral Chemicals into the market. According to the United Nations, the global economy is projected to contract by around 3% or more instead of registering a 2.5% growth projected by the World Economic Situation and Prospects report 2020.

Chiral Chemicals play a vital role in the production of pharmaceuticals and agrochemicals. Since these industries come under essential services, some of the large players have continued operations at their production facilities while taking preventive measures such as practicing social distancing, remote working when possible, and enforcing travel restrictions. Looking at the global scenarios, various governments have lifted restrictions and allowed ease for the supply of Chiral Chemicals. Further, various manufacturers have focused on developing innovative products to counter COVID-19.


Chirality has a major role in the synthesis and development of drugs. About more than half of the drugs currently in use are chiral compounds. The pharmacological activity of drugs depends mainly on their interaction with biological targets such as proteins, nucleic acids, and biomembranes. Chiral drugs include glucuronide, tramadol, capreomycin, glutathione, ketamine, thiopentone, isoflurane, enflurane, desflurane, atracurium, mepivacaine, bupivacaine, atropine, isoproterenol, paracetamol, levocetirizine, and dobutamine. Henceforth, the growth of the global pharmaceutical industry and increasing demand for drugs are expected to propel the growth of the global chiral chemicals market during the forecast period.


Pesticides’ toxic effects on the environment are becoming common because 25% of pesticides contain chiral chemicals. The growing number of patents on chiral pesticides and other agrochemical products has put regulatory bodies under pressure to assess chiral pesticides’ ecotoxicity. Furthermore, the insecticides and herbicides mentioned above pose unpredictable ecological risks, causing problems for both humans and the environment.


Chiral chemicals are a group of chiral synthons to synthesize products, drugs, agrochemicals, and various other non-pharmaceutical applications. The conventional synthetic approach is inefficient in material usage and requires a large number of organic solvents with high toxic metals, resulting in high energy intensive capitalization. The adoption of biocatalytic beneficial technology would take the chemical industry at the forefront to meet the country’s economic development.

North America accounted for a significant market share and is projected to exhibit a healthy CAGR over the forthcoming years. Asia-Pacific is the expected to drive the product demand due to growing pharmaceutical industry in South Asia. Over the next five years, the Southeast Asian pharmaceutical market is expected to increase at an annual rate of more than 11%, with sales reaching USD 40 billion in 2020. As a result, it has become one of the world’s fastest expanding pharmaceutical markets. The region provides lucrative opportunities for pharmaceutical companies that can effectively synergize good manufacturing practices (GMP) standards, competitive pricing, and an export strategy. Pharmaceutical companies in South Asia will profit from rising healthcare spending, an aging population, greater incidence of lifestyle-related diseases coupled with a rising GDP per capita. According to the World Health Organization (WHO), 13% of the population (10.3 million people) is currently above the age of 60. By 2025, the elderly will account for 25% of the population. Indonesian and Malaysian demographics are following a similar trend.

The competitive landscape offers an analysis of the key developments by the companies operating in the global market. The global chiral chemicals market is expected to exhibit a healthy CAGR during the forecast period. The growth of the global market is primarily driven by the widespread use of persulfate in major end-use industries such as polymer, electronics, water treatment, personal care and cosmetics industry, and others. Some of the major players operating in this market include BASF (Germany), Solvias AG (Germany), Stern Chemicals, Inc. (United States), Johnson Matthey Plc (United Kingdom), W. R. Grace & Co.-Conn. (US), Chiral Quest (Suzhou) Co.Ltd. (China), Tyche Industries Limited (India), Nanjing Legend Pharmaceutical (China), The Dow Chemical Company (US), and Flamma S.p.A. (Italy). However, major global companies like BASF, The Dow Chemical Company, Solvias AG, and W.R. Grace & Co. cater product portfolio of chiral chemicals according to application industries such as pharmaceutical, agrochemical, and flavor & fragrances.

The Chiral chemicals market is segmented by type, application, end use and region in the report. In terms of insights, this report has focused on various levels of analysis such as market dynamics, value chain analysis, Porter's five forces, competitive landscape, and company profiles—all of which comprise and discuss views on the global chiral chemicals emerging and fast-growing segments, regions, and countries.

What growth rate global Chiral chemicals market would register in the future?

The global Chiral chemicals market would register a growth of 11.25%.

Which industry will play a crucial role in taking the Chiral chemicals market ahead??

The pharmaceutical industry will play a prominent role in taking the market forward.

What is the key restraining factor for the global Chiral chemicals market?

Government regulations on chiral chemicals could restrain the market.

Which region would enjoy the upper hand in the Chiral chemicals market?

North America would enjoy the upper hand in the Chiral chemicals market.

Which Asia-Pacific country would set the trend in the Chiral chemicals market?