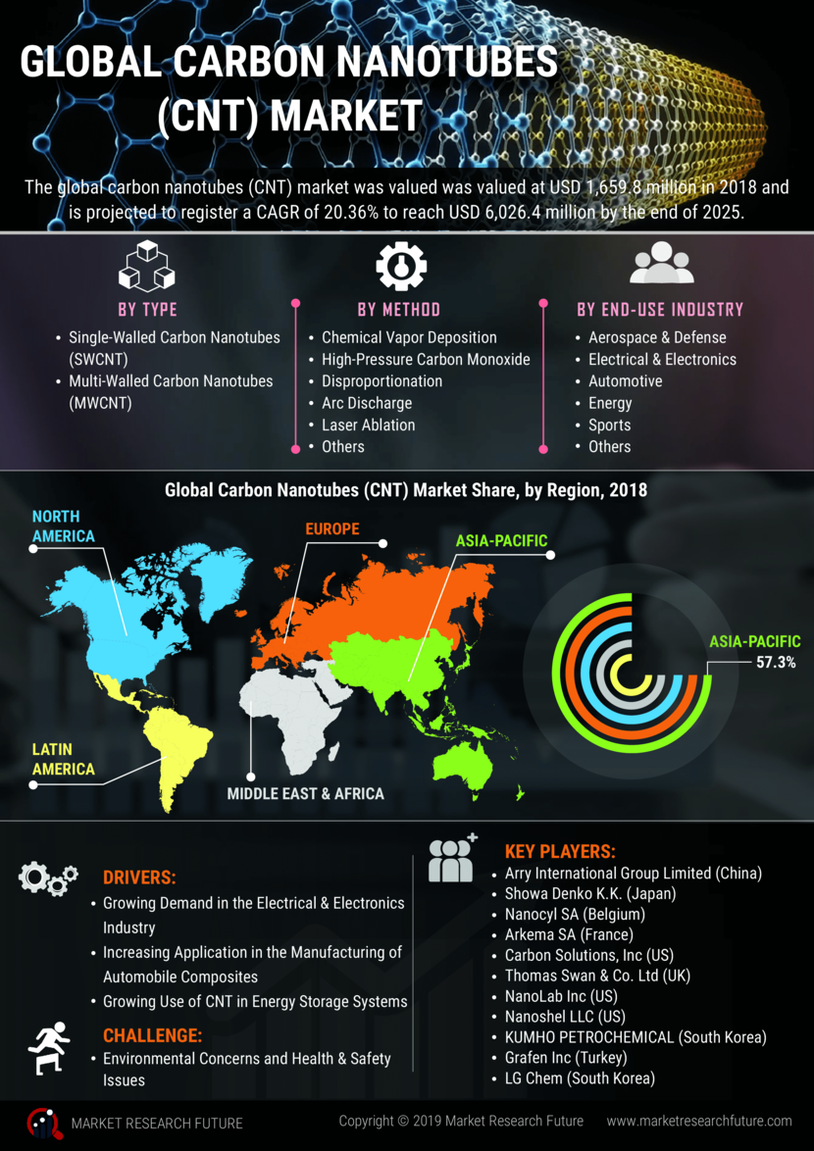 In the ensuing years, the carbon nanotubes industry shall benefit from the rising deployment of nanotubes for facilitating technological advances in numerous fields, including engineering, electronics, medicine, to name a few. But, with the surging environmental, health and safety concerns, the market demand can take a slight hit in the following years.

MRFR experts note various trends in the worldwide carbon nanotubes market, one of them being the huge demand for different composites materials in numerous applications including bulletproof jackets and sporting goods. Carbon nanotubes are increasingly being used in these applications as these help bolster the strength as well as mechanical properties of the finished market goods. These end products are stiffer, stronger, and lighter, following the processes that provide high-quality finishing.Rice University material scientists have released a novel hypothesis for producing batches of carbon nanotubes with a specific, desired chirality. Their approach might make it easier to purify semiconductors or all-metal nanotubes. These CNTs are used today to innovate on a never-before-seen scale in various industries, including optics, water purification, electronics, and biosciences. CNTs are difficult to grow, despite how great they sound. They frequently have both single and multiple walls and different chiralities. The scientists have demonstrated a fresh method for producing a batch of uniform carbon nanotubes. Different chiralities of carbon nanotubes develop at various rates. As a result, slower-growing tubes can be identified and eventually removed.

A first-of-its-kind project is about to come online in Meadow Lake, Sask. The Meadow Lake Tribal Council (MLTC)’s new Bioenergy Centre, which will be operational by the end of February, will turn wood waste from the nearby NorSask Forest Products sawmill into electricity, powering around 5,000 homes in Saskatchewan and providing heat and power for a new continuous kiln.

From the thermal oil plant, the oil travels to the Organic Rankin Cycle building, which houses an Organic Rankin Cycle power generation system from Turboden. There, the hot thermal oil heats another oil called cyclopentane. That cyclopentane, when it gets to a certain temperature, turns gaseous. When it becomes gaseous, then it turns the turbine, which turns the generator that produces the energy.

The arrival of the novel coronavirus has a significant and economic impact on the carbon nanotubes market share functioning. The financial and industrial market sectors like travel, tourism, aviation, production, and manufacturing were the worst affected. The IMF and the World Bank were expecting the worst recession during the period of 2019-2020. The extending lockdowns, halt of the market functioning followed by the stoppage of economic activities are likely to decline the global carbon nanotubes market demand.

However, the smooth functioning of the global demand and supply chain will help the market play a steady role in promising better growth aspects for the carbon nanotubes market during the forecast period of 2021-2030.

Following the COVID-19 outbreak, cleanroom technology is increasingly being used to facilitate contamination control. Every day, contamination control measures are being undertaken, with COVID-19 making it even more important, given the rising need to safely store pharmaceutical drugs and vaccines. Therefore, the demand for cyclopentane has risen considerably in recent times.

The average market vehicles make use of 55 pounds of copper in an electrical wire and the same amount increases to three times when the discussion is about an electric car. The reducing amount of copper that is put in vehicles is likely to have the ability to significantly reduce the overall weight of the market vehicles followed by the reduced fuel consumption and carbon emissions that will drive the carbon nanotubes market growth towards global growth by the end of the period in 2028. Also, its emergence as a lightweight emergence to copper has an important role to play in developing the market and opportunities to dwell upon during the forecast period that will be ending in 2028.Canatu, a Finnish company that produces advanced carbon nanotubes (CNTs), has completed an €18 million fundraising round primarily driven by seasoned investors 3M Ventures, Ascend, and eFruit International. Since 2008, Canatu has secured a total of €74 million in funding. The business intends to accelerate its mission to develop the most cutting-edge carbon nanotubes for goods that will revolutionize the market. One of the Scandinavian technology businesses with the fastest revenue growth is Canatu, which reported over 260% strong revenue growth in 2021 and achieved an additional 80% growth in the first half of 2022. Canatu CNTs are produced using a special method that guarantees the necessary adaptability and dependability for highly developed systems. The company's primary product ranges from warmers for ADAS to 3D touch sensors and EUV membranes, emphasizing the automotive and semiconductor industries.

The carbon nanotubes market revenue is likely to be impacted by the restraints that challenge the market from growing in the forecast period of 2021-2030. The release of nanoparticles and nano-biotechnological byproducts in the production of nanomaterials poses serious threats that have a relation with human health and safety. Carbon nanotubes are found in various ranges and products from solar cells to tennis rackets. They are increasing their quantity to enter the environment but the associated issues bar their growth.

There has been a huge increase in the demand for composites materials in various kinds of carbon nanotubes market applications like sporting goods and bulletproof jackets. Carbon nanotubes are commonly known as CNTs. the use of CNTs in an epoxy material increases the strength and mechanical properties that are held by the finished market goods. These products end up being more stiffer, lighter, and stronger, after going through processes that offer high-quality finishing. These nanotubes are used for controlling and enhancing mechanical and chemical conductivity in polymers.

Chronos Resources Ltd. and Samoth Oilfield Inc. are pleased to announce that they have entered into a definitive agreement. Chronos is an oil-focused, exploration, development and production company based in Calgary, Alberta, operating high-quality, heavy-oil, development assets in the Gull Lake area of southwest Saskatchewan and heavy-oil assets in the Lloydminster area of Saskatchewan and Alberta.

The carbon nanotubes market has been divided all across the globe based on the type, method, end-user industry, and region.

Based on the Method

The market has been divided all across the globe based on the method into laser ablation, arc discharge, disproportionation, high-pressure carbon monoxide, chemical vapor deposition, and various others.

Based on the End-User Industry

The market has been divided all across the globe based on the end-user industry into the sports industry, energy sector, automotive industry, electrical and electronics industry, aerospace and defense industry, and others.

The carbon nanotubes market has been divided worldwide based on the region into the North American region, Asia-Pacific region, European region, Latin American region, and the Middle East and African region.The Formula1 ESD-safe resin from Mechnano has received approval from Asiga, a manufacturer of 3D printing equipment, for use on all Asiga printers. Formula1 is a material for additive manufacturing that uses Carbon Nanotubes (CNTs) to give 3D-printed objects isotropic static dissipative qualities. Mechnano claims that the resin accomplishes this with no carbon sloughing and without sacrificing mechanical performance. CNTs are separated and detangled using the company's proprietary technology, MechT, before being dispersed into a Masterbatch to improve the performance of additive manufacturing materials.

The carbon nanotubes market has been divided all across the region based on the region into North American region, Asia-Pacific region, European region, Latin American region, and the Middle East and African region. Being the fastest-emerging region, the largest market share in the global market is held by the Asia-Pacific region owing to the presence of countries like South Korea, Japan, China, and India which are regarded as the main junction of the automobile, electrical, and defense industry and hence drives the market demand in this region. Moreover, increasing urbanization and industrializations are another factor that creates more market demand.

The second-largest market share in the global carbon nanotubes market is held by the North American region owing to the presence of countries like the US, Canada, and Mexico that has a huge automobile sector and hence drives the market demand in this region. Moreover increasing investment in various power generation projects, aerospace projects, and automobile projects create more market demand. The presence of various major key players also drives the market demand in this region.The development of vertically aligned single-walled carbon nanotubes (SWCNT) by scientists at the Lawrence Livermore National Laboratory (LLNL) has the potential to transform various industrial products, from water filters and boat hulls to automotive parts, rechargeable batteries, and sporting goods. Currently, the majority of CNT manufacturing is used in thin films and bulk composite materials, which rely on disordered CNT architectures. Organized CNT structures, such as vertically aligned forests, offer considerable advantages for utilizing distinct CNT features in macroscopic systems for various applications.

The third-largest market share in the global market is held by the European region owing to the presence of a well-established technologically advanced infrastructure that requires more power generation and hence creates more growth opportunities in this region. Moreover, increasing investment coupled with increased expenditure in the automobile sector drives the market demand in this region.

The Latin American region and the Middle East and African region show the least market share due to the presence of low infrastructure in both these regions. Low per capita income is another contributing factor that restricts the market growth in these regions.

North America has also gradually shifted toward use of cyclopentane, due to stringent regulations imposed on HCFCs by various government bodies in the region.The market in Asia Pacific is expanding at a high growth rate, as the region is providing immense growth opportunities to regional as well as global manufacturers.

The most prominent major key players in the carbon nanotubes market all across the globe are mentioned below:


These major key players adopt various strategies to endure their market position in the carbon nanotubes market in the global market by going for mergers, and acquisitions, by collaborating, setting up a new joint venture, establishing a partnership, developing a new product line, innovation in the existing product, developing a unique production process, and many others to expand their customer base in the untapped market of the carbon nanotubes market all across the globe.

Northern Graphite Corporation is now a part of an agreement, which will allow it to secure a 100% interest within the Mousseau West Graphite project while retaining a 2% net smelter royalty.

Kureha Corporation will be leading the fundraising round of Wootz, Inc., with its wholly-owned subsidiary Kureha America Inc. Wootz is a rapidly emerging startup that develops high performance advanced carbon nanotube products.

What will be the possible market valuation of the carbon nanotubes market?

The global carbon nanotubes market is predicted to touch USD 17.34 Billion by 2030.

At what CAGR is the carbon nanotubes market expected to grow over the forecast period?

What are the top players operating in the carbon nanotubes market?

What are various strategies adopted by the key players to increase their presence in the carbon nanotubes market?

Key players have incorporated strategies such as expansion, mergers and acquisitions, product innovations, and joint ventures to increase their presence in the carbon nanotubes market.

Which factors may restrict the carbon nanotubes market growth?

Which region is predicted to dominate the carbon nanotubes market?

The APAC region is predicted to dominate the carbon nanotubes market during the forecast period.