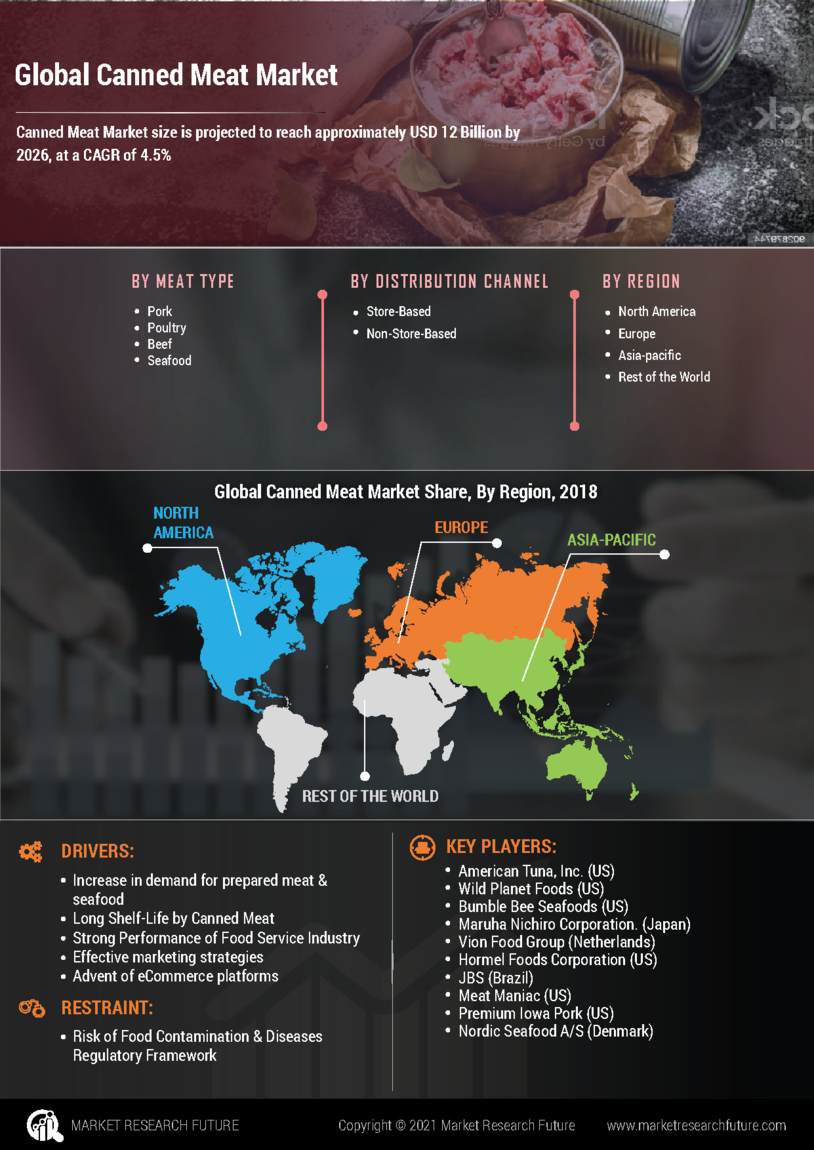 Global Canned Meat Market size is projected to reach approximately USD 12 Billion by 2026, at a CAGR of 4.5% from 2020 to 2026.  Canned meat products are prepared by hermetically sealing the product in the container and thermal processing to destroy spoilage microorganisms. Growing awareness among the consumers regarding the nutrition of canned meat is expected to fuel the growth of the global canned meat market. Canned meat is also known as thermally processed meat and is classified into two categories sterilized products and pasteurized products. According to the Food & Agriculture Organization of the United Nations (UN FAO), it is predicted that the demand for global seafood will exceed 210 million tons by 2030. The demand for canned meat is booming across the globe. On July 2020, in the US, the sales of canned meat surged by 70%. Manufacturers are expanding their product portfolio by introducing canned meat in the market. For instance, in 2018, Hormel Foods has expanded its meat offering in the US with the launch of canned chili. Overall, the global outlook of canned meat is expected to remain positive during the forecast period.

The COVID-19 outbreak has turned the lives of the people upside down around the globe and has impacted various industries. The pandemic has impacted the supply chain of canned meat, as many countries are lockdown and have sealed their borders to curb the spread of the novel coronavirus. Strict containment measures imposed by the government of various countries and preventive measures to control the impact of the outbreak have led to a significant restriction in transportation.

What is the CAGR of the canned meat market?

What is canned meat market valuation?

American Tuna, Inc. (US), Bumble Bee Seafoods (US), and Wild Planet Foods (US) are some well-established canned meat market players.

What can drive the canned meat market?

The surge in e-commerce platform to boost canned meat market.

In which region is canned meat market expected to thrive?

APAC canned meat market to rise in the assessment period.