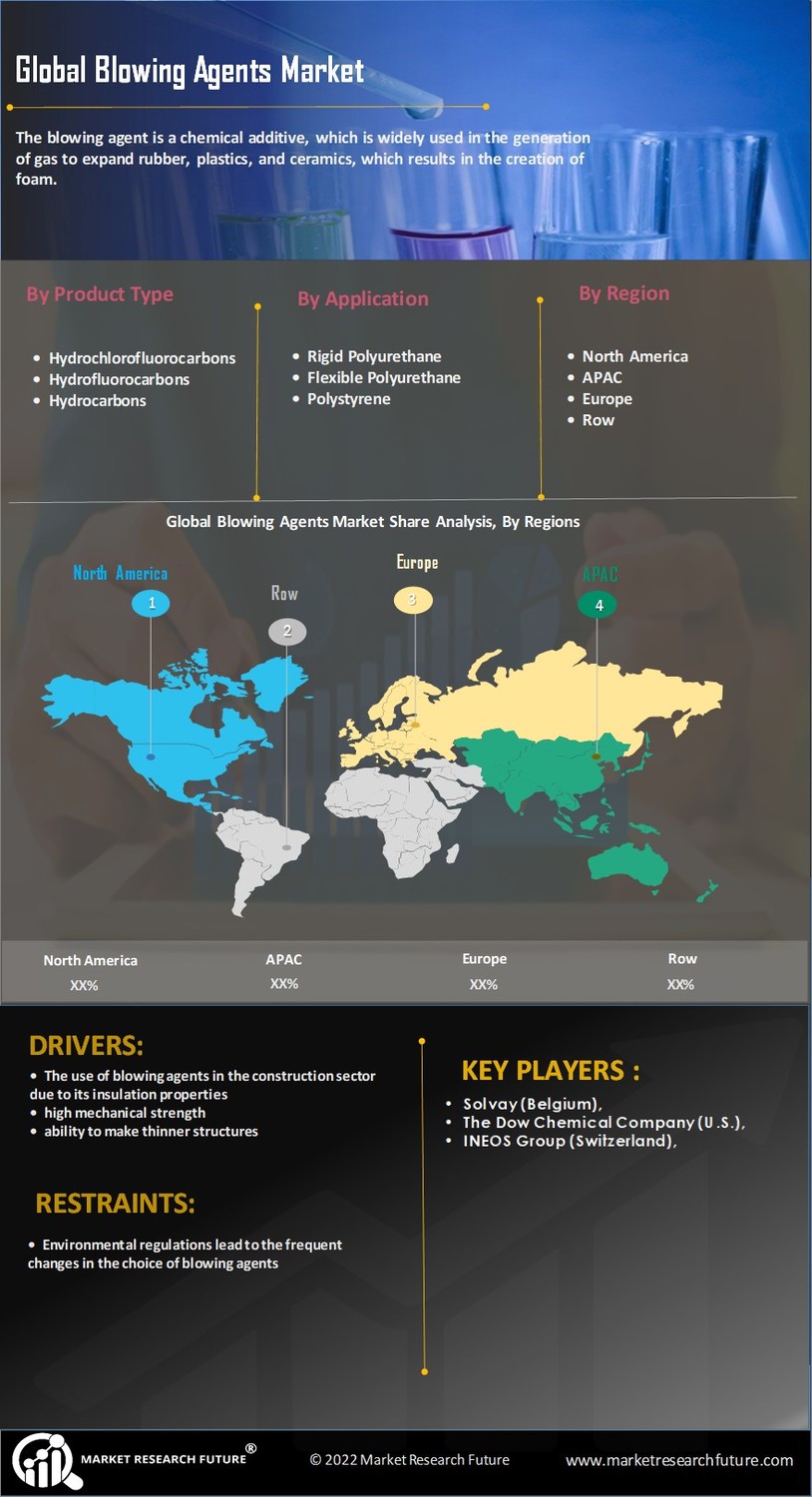 Blowing Agents Market Overview The blowing agent is a chemical additive that is commonly used to generate gas to expand rubber, plastics, and ceramics, resulting in foam formation. Lightweight, heat insulation, sound and shock absorbency, flexibility, electrical insulation, permeability, and other benefits are all provided by using a blowing agent. The increased demand from major end-use sectors such as automotive, aerospace, and building & construction is driving the worldwide blowing agents market. Blowing agents make the vehicle lighter, boosting its economy and lowering emissions. They are mostly utilized to make seats, plastic interiors, and weather strips, and they also provide insulation and cushioning. Various environmental rules aimed at reducing harmful emissions, such as India's Bharat Stage Emission Standards (BSES) and China's State Environmental Protection Administration (SEPA), are expected to boost product demand in the automotive sector. These agents are utilized in the aerospace sector to make engine turbines because they reduce the cost of raw materials while also improving quality. Furthermore, their lightweight, which is an added benefit, is driving up demand in the aircraft industry. The use of blowing agents in the construction sector is likely to fuel market expansion over the assessment period because of its insulating characteristics, high mechanical strength, and capacity to build thinner structures.

Global Blowing Agents, by the Application (%)

Europe accounted for the second largest market share in the year 2016 on account of the high production and sales of automotive parts in Western European countries.

North America is expected to witness a considerable growth on account of the high demand from the reviving construction, automotive, and aerospace industry.

Latin America is projected to witness a considerable growth due to growing automotive industry in Mexico, Brazil, and others.

The Middle East & Africa is likely to witness significant growth due to the burgeoning infrastructural investments in the GCC countries.

The global blowing agents market is segmented on the basis of the type, product, application, and region.

On the basis of the type, the global blowing agents market is segmented into exothermic and endothermic.

On the basis of the application, the market is segmented into rigid polyurethane, flexible polyurethane, integral skin polyurethane, polystyrene, polyolefin, phenolic, and others.Recent Development


In 2014, BASF announced that Whirlpool Corp. is now using its new formulation of Elastocool stiff foams with Honeywell's Solstice Liquid Blowing Agent (LBA) in a series of consumer refrigerators. The product was the first commercial polyurethane system to use a hydroolefin foam blowing agent with a low global warming potential (GWP). At the Polyurethanes Technical Conference in October 2017, the Chemours Company was named the winner of the Polyurethane Innovation Award for its OpteonTM 1100 foam blowing agent, a low GWP agent that provides exceptional energy efficiency, extended shelf life, long-term R-values, material compatibility, and ease of conversion.

What are blowing agents?

Blowing agents are chemical additives used to generate gas in order to expand rubber, plastics, and ceramics through the generation of foam.

What are the benefits of using blowing agents?

The growing demand for blown polymers in the automotive, construction, and aerospace industries is the major driver for the blowing agents market.

Asia Pacific is the dominant regional market for blowing agents.

Leading players in the blowing agents market include Daikin, Dow, and INEOS, among others.

Blowing Agents: Increasing demand from the automotive &amp; construction industries across the gl...