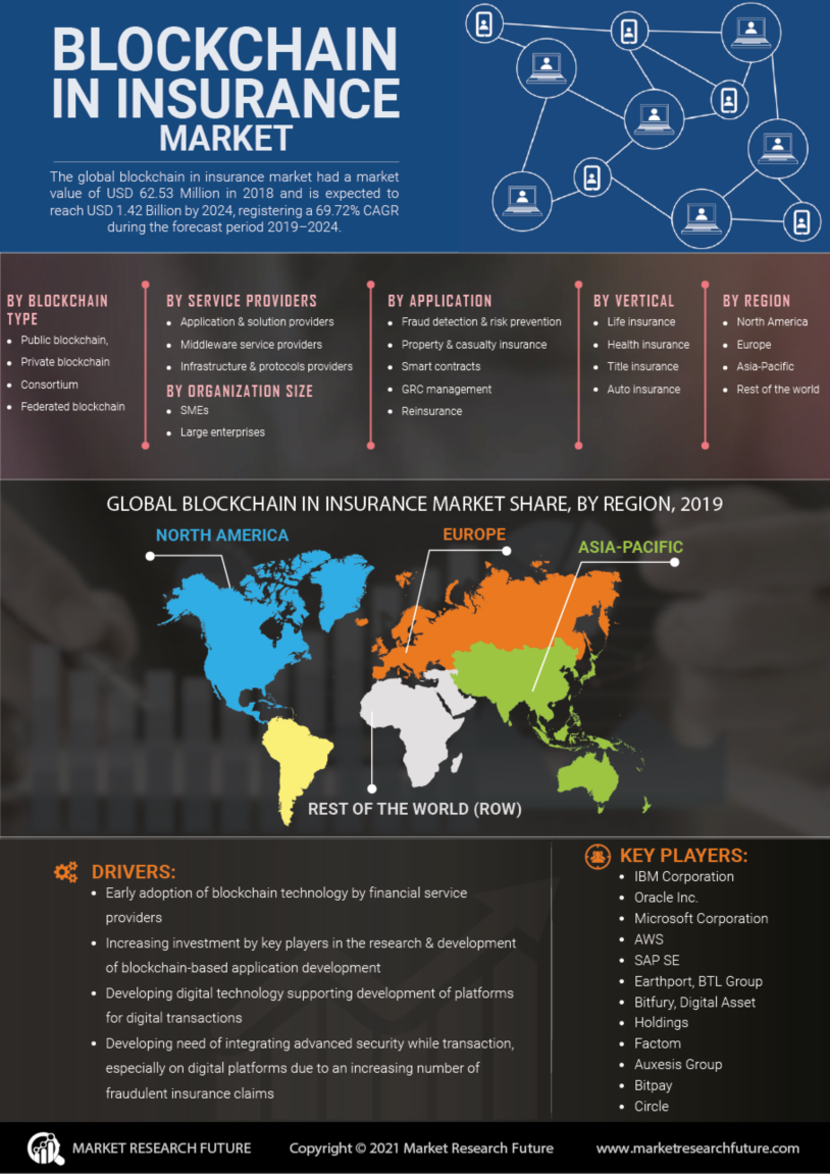 The blockchain in insurance market had a market value of USD 62.53 Million in 2018 and is expected to reach USD 1.42 Billion by 2024, registering a 69.72% CAGR during the forecast period 2019–2024. Early adoption of blockchain technology by financial service providers, increasing investment by key players in the research & development of blockchain-based application development, developing digital technology supporting development of platforms for digital transactions, and developing need of integrating advanced security while transaction, especially on digital platforms due to an increasing number of fraudulent insurance claims are some of the prime driving factors for the market growth of blockchain in insurance. However, a lack of standard protocols and limited technical knowledge in end users are some of the factors restraining market growth.

Increasing adoption of cloud-based solutions and services, increasing applications areas of IoT are some of the factors expected to create significant opportunities for the market in the coming years. Whereas, uncertain regulatory issues are one of the major challenges faced by the blockchain in insurance market.

Blockchain is a decentralized technology works on public or private distributed ledger systems. These systems keep track of monetary assets and transactions without any interference of any central trust authority such as banks, and financial institutes. With the help of digital signatures encrypted with public and private keys, blockchain provides highly secured gateway for transactions. Cryptographic keys, distributed networks, a system of records, and smart contracts are categorized as major building blocks of the blockchain technology.

Integration and deployment of blockchain technology-based solutions into banking, financial, and insurance operations have a number of advantages. Some of the major use cases are improving functioning of claims management, peer-to-peer insurance, reinsurance applications, trade finance & post trade/transaction settlements, and cross border payments & settlements.

Black, B3i, Inmediate, Lemonade, RiskBazaar, Teambrella, and Tierion are some of the key start-ups supporting the deployment of blockchain in insurance companies. 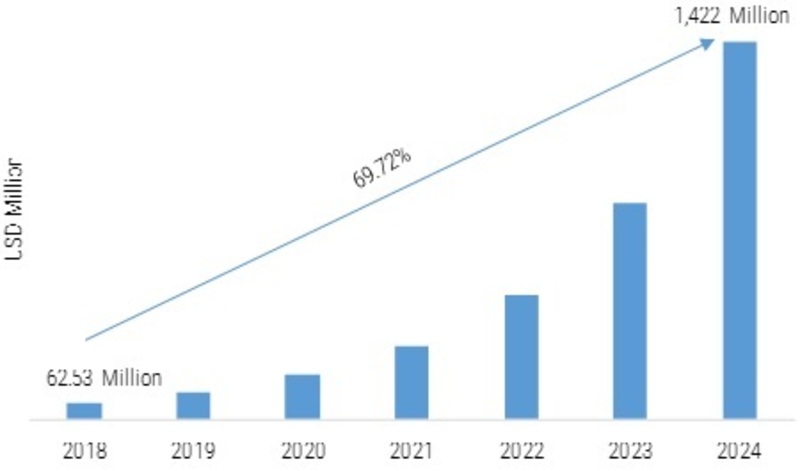 The blockchain in insurance market has been segmented into type, service provider, organization size, application, sector, and region.

By blockchain type, the market has been segmented into public blockchain, private blockchain, and consortium or federated blockchain.

By organization size, the blockchain in insurance market has been categorized into SMEs and large enterprises.

By region, the blockchain in insurance market has been segmented into North America, Europe, Asia-Pacific, and the rest of the world.

Market Research Future (MRFR) has studied the US, Canada, and Mexico in the analysis of the North American blockchain in insurance market; Germany, the UK, France, Spain, and Italy in Europe; China, Japan, India, Singapore, Australia, and South Korea in Asia-Pacific; and the Middle East & Africa and South America in the rest of the world.

Blockchain in insurance market is currently dominated by North America due to the high adoption rate of blockchain by the finance sector and increasing skilled expertise for cryptocurrency in the region. Further, increasing initiatives by insurance agencies in educating insurers about the benefits of using blockchain technology are fueling the market growth of blockchain in insurance in the region. The US, followed by Canada, is contributing significantly in generating the highest revenue for the market.

Asia-Pacific is projected to be the fastest growing market for blockchain in insurance. Insurance companies in developed countries in Asia-Pacific such as Japan, Singapore, and South Korea are investing a significant amount in research & development of blockchain technology. China is leading the market. In 2018, Chinese insurance firms—Huatai Insurance, China Property & Casualty Reinsurance Company (CPCR), and Fun in Funding—introduced blockchain-enabled medical insurance service, Hongfu e-life. The market India is projected to witness high growth rate in the coming years owing to factors such as development in advanced technologies and increasing initiatives by Indian insurer consortium to enhance their expertise in blockchain in order to improve their insurance services and claims management systems.

What growth rate can be attained by the market in the coming years?

The market can attain a growth rate of 69.72% in the coming years.

What is expected to be the market size by 2024?

Who are the top players in the global market, as listed in the report?

What are the blockchain types covered in the report?

Depending on the blockchain type, the market has been considered for private blockchain, consortium or federated blockchain as well as public blockchain.

The market is dominated by which region?

The market is dominated by North America.