The major factors driving the growth of the global battery storage inverter industry include the increasing demand for grid-connected solutions and growing focus on rural electrification worldwide. For instance, in June 2016, ABB installed a 1 MVA/380 kWh battery-based PowerStore solution to maximize the renewable energy penetration and reliability of power supply. The facility is grid-connected. Such developments increase the need for battery storage inverters in grid-connected solutions in case of a grid outage. Furthermore, government support towards the rapid execution of renewable energy projects is expected to act as an opportunity for the market.

Many major players such as Dynapower, Robert Bosch GmbH, and SMA are actively focusing on signing contracts and agreements with utilities and industries to supply battery storage inverters. For instance, in May 2018, Dynapower signed an agreement with Raychem RPG Private Limited to bring its energy storage inverter technology to India and other SAARC (South Asian Association for Regional Cooperation) countries. This has helped the organization achieve a reduction of the electricity bill through the microgrid. However, high maintenance cost is expected to restrain the growth of the market.

The global battery storage inverter market has been segmented based on type and application. On the basis of type, the global market is divided into single-phase electric power and three-phase electric power. The single-phase electric power segment is expected to hold the larger share during the forecast period as it is most commonly used in homes and small commercial buildings where the large load is not required. On the basis of application, the global market is segmented into utility-scale, commercial, and residential. The utility-scale segment is expected to grow with the highest CAGR during the forecast period due to the setup of large-scale PV projects across the globe. Government support towards installations of solar plants in order to increase renewable sources of energy is also set to drive the utility-scale segment. Therefore, the utility-scale segment is driving the market during the forecast period.

The Battery Storage Inverter Global Market is expected to grow at 11.45% CAGR during the forecast period. 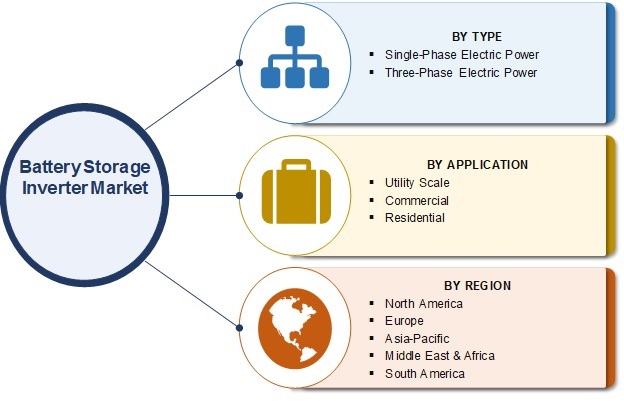 A battery storage inverter is a special type of grid-connected inverters, which can also be bi-directional. It can help store and release electric energy according to the requirements in a smart grid. At present, this type of inverter is used in photovoltaic power generation. Moreover, solar inverter with battery storage is also used for solar energy generation.

The Global Battery Storage Inverter Market is expected to witness high growth during the forecast period owing to the developing infrastructure globally.

On the basis of region, the global market is segmented into Asia-Pacific, North America, Europe, the Middle East & Africa, and South America. Asia-Pacific holds the largest market share due to the increasing initiatives by the governments towards renewable energy and the presence of a large number of battery manufacturers in this region.

What is the CAGR of the Battery Storage Inverter Market?

What is the Battery Storage Inverter Market value?

Battery Storage Inverter Market Is Expected To Grow At 10.05% Cagr By 2027