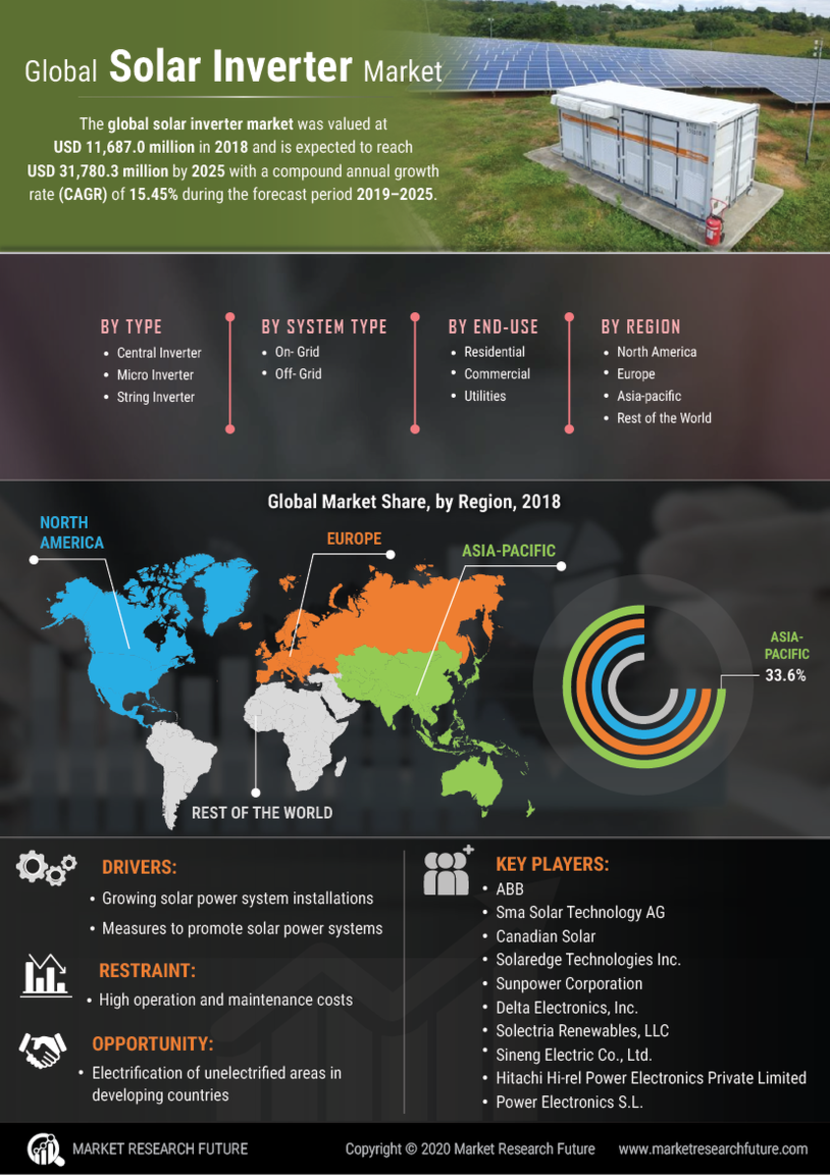 The demand for renewable energy is growing at a very high pace owing to global environmental awareness which is driving the demand for clean and green energy on an unprecedented scale now. Keeping with this trend, solar Inverters now enjoy tremendous popularity worldwide due to their capacity to quickly convert DC power into AC while staying connected to the on-grid system – in an environment friendly manner. The ever-increasing number of solar power plants connected with the grid through an on-grid solar inverter pushes growth in the solar inverter market size globally.

Some of the other factors that are stimulating the market growth include technological advancements and the rising governmental support in several countries. As a result, the solar inverter is garnering huge traction globally.

The Asia Pacific reason is expected to lead the market with a heavy demand for solar inverters during the forecast period. Increasing investments in the construction sector, burgeoning demand for solar power energy sources, growing investments in solar power projects and an ever-escalating demand for solar energy as a viable substitute to conventional energy sources will be seen driving growth in this region. An impetus to reduce carbon emission by meeting the region’s electricity needs, and various favourable government initiatives like energy-saving certificates and incentives by the governments in Thailand, Malaysia, China, and India are adding to the global solar inverter market growth in the region.

In contrast, the European solar inverter is predicted to have slow growth over the forecast period owing to an increase in the anti-dumping tariffs on Chinese manufactured components, a downward trend on minimum import prices, and depreciation of the Euro.

Increasing strategic partnership deals and approaches, such as collaboration, mergers & acquisitions, expansion, and product launches, are expected to be seen during the next few years. Major solar inverter market players are making strategic investments in driving research and development activities and fostering their expansion plans.
As recently as on Feb. 04, 2021, Solarvest Holdings BHD announced that it is entering into memorandums of understanding (MOUs) with Huawei Technologies SDN BHD and Sungrow Power Supply Co Ltd. to obtain inverters.

List of Key Companies Profiled in the Solar Inverter Market Research Report are:

Major factors driving growth in the global solar inverter market share comprise of continuous infrastructural development in the developing and developed economies and the rising demand for uninterrupted electricity supply. For instance, the UAE government is currently focused on Smart Dubai project which aims to transform the city of Dubai into a leading global smart city. Such expansion in the construction activities will drastically boost the solar inverter market value in the region.
Additionally, the increasing awareness regarding greenhouse gas effect and the rising cognizance of environmental issues will further bolster the global solar inverter market outlook during the forecast period. Use of the solar inverter reduces the high cost of electricity bills and provides higher efficiency in the long run. Various investors in the energy generation ecosystem are also exploring viable opportunities to reduce mankind’s carbon footprint by highlighting the use of renewable energy sources for power generation. This growing focus on renewable energy sources will have a positive impact on the solar inverter market revenue globally.

Solar inverters are an efficient solution for reliable, safe and green power in off-grid solar panels for commercial & industrial sector for a very long time. Now however, with the installation costs getting lower with technological advancements, the residential use of these inverters is also rising. This creates a plethora of opportunities in the residential applications and impacts the global solar inverter industry positively.

The commercial & industrial end-use segment is especially expected to witness a significant CAGR during the forecast period largely owing to the growing acquisition of large off-site projects that allow businesses to offset a greater portion of their energy use. This has become increasingly necessary for tech companies such as Facebook, Microsoft, Apple, and Amazon Web Services and is therefore contributing significantly to the global solar inverter market share.

With the supply chains across the world hindered and/or suspended during the COVID-19 outbreak and the consequent global lockdowns, the solar inverter market growth was also hit. Issues such as labour shortages, raw material unavailability, stagnation of the global trade and subsequent delays in installation are estimated to drive the prices of the solar inverters upwards which will prove to be a significant obstacle that the industry will have to adapt to. Increase in prices will cause project delays which, in turn, would again cause a spike in prices. The report explains the impact at length and estimates the recovery time for the global solar inverter market growth in the near future.

The report segments this market based on factors such as technology and voltage etc. to better understand the specific types that will be driving growth in the industry during the forecast period.


Currently, the < 1000 V solar PV inverter accounts for the majority of the total market share.


Presently, the utility scale segment exhibits dominance in the market.

What is the estimated market size of the global solar inverter market?

The global solar inverter market is anticipated to account for a substantial revenue generation of USD 24.5 billion by 2023, expanding at a considerable CAGR of 5.78% over the review period.

Who are the recognized significant market players in the global solar inverter market?

On what basis is the global solar inverter market’s segmental analysis conducted?

The global solar inverter market segmentation is conducted based on type, system type, and end-users.

is the regional analysis of the global solar inverter market carried out?

The regional analysis of the global solar inverter market is conducted in four major regions, including the Asia Pacific, Europe, North America, and the rest of the world (including the Middle East and Africa, and Latin America).

Which region is the most lucrative in the global solar inverter market?

the report projects the fastest growth in the Asia Pacific, and mature growth in North America and Europe. Moreover, the rest of the world region is anticipated to witness a gradual market growth over the forecast period.

What is difference between solar inverter and normal inverter?

The standard inverter is done primarily to convert current DC to AC. ... Solar Inverter also operates related to the regular inverter, but it has an extra feature to charge the battery using solar panels, and it runs in hybrid mode, it means it charges the battery using electricity as well as the solar panel.

Solar Inverter Market Is Projected To Grow With A 4.9% Cagr By 2027