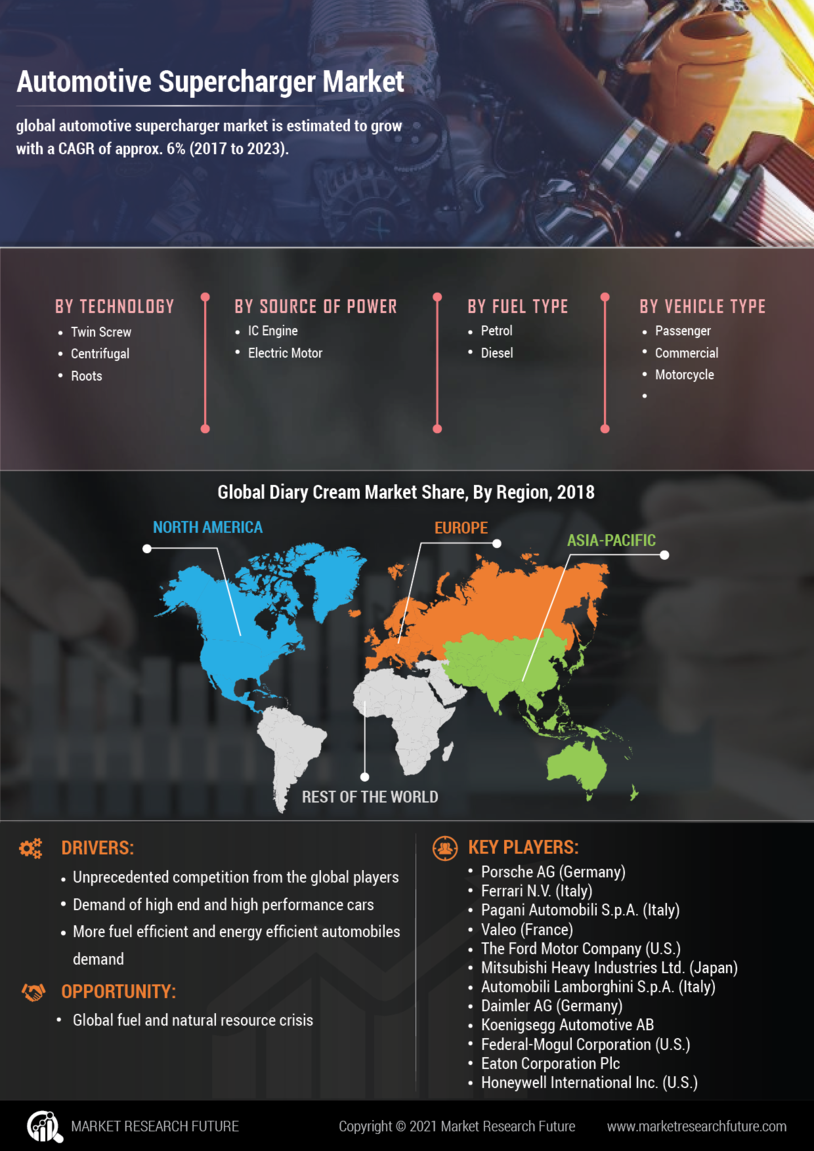 Automotive supercharger market is estimated to grow with a CAGR of approx. 5%

Automotive supercharger basically involves an external compressor fitted to the engine assembly. This compressor sucks in atmospheric air, compresses the same, and passes this compressed air into engine combustion chamber. This high-pressure air mixes with the fuel in the engine causing combustion at high temperature. This leads to production of a large amount of heat and by-product in the form of gases. This compressor is connected to the engine via belt and pulley mechanism and thus, gets driven by the engine. The biggest advantage of this system is that the power generated by the engine per unit volume of fuel greatly increases along with the fuel efficiency.

There are several factors responsible for the growth of automotive supercharger market, over time, in the global scenario. Firstly, the world of automobiles is facing unprecedented competition from the global players, with each automaker trying to differentiate themselves from the remaining lot by a unique product offering. Secondly, the automobile consumers don’t mind purchasing high end and high performance cars as long as their expectations in terms of product design, utility value, and comfort are met. Thirdly, the world is facing global fuel and natural resource crisis, thus it makes business sense from the point of view of the auto makers, in manufacturing more fuel efficient and energy efficient automobiles. The global automotive supercharger market is estimated to grow with a CAGR of approx. 6% (2020 to 2023).

On the basis of technology, the most widely used type is the centrifugal supercharger. The air-fuel mixture enters this system through the central part, subsequently passing through the diffuser, causing the air pressure to increase. Affordability and ease of installation make this system very popular. On the basis of the source of power, the Internal Combustion engine uses the supercharger system considerably more compared to the electric motor variety. The mechanism of the supercharger aptly suits the IC engine functionality, which is based on the combustion of fuel in the engine under pressure, and resultant release of high amounts of energy. On the basis of fuel used, petrol engine uses the supercharger system more, since the exhaust produced by the petrol engine is less (compared to diesel engine). Thus, with the increased rpm of the engine, the connected supercharger increases the vehicle power (unlike the diesel engine, which has to deal with the additionally generated turbo lag).

On the basis of region, the market is segmented into North America, Asia Pacific, Europe, and Rest of the World. The North America market (countries such as the U.S. and Canada, in particular) has seen a growing interest in SUVs and sports cars. These high-performance automobiles are manufactured using the latest technology, including the supercharger system to provide the added thrust to the automobile. The Asia Pacific market is said to be the next automotive hub in the world with the rising income and purchasing power of the middle class. India and China – the two global impact creating economies, are seeing a trend of increasing demand for bigger and luxury cars with more emphasis on car performance. Thus, the market in this region will see a huge growth in the near future. The Europe region houses some of the most high profile and world-renowned automobile manufacturers in the world who compete with one another based on the best vehicle specification offered. This is the reason the Europe region has always held a strong prospect for the growth of the supercharger system.

The report for Global Automotive Supercharger Market of Market Research Future comprises of extensive primary research along with the detailed analysis of qualitative as well as quantitative aspects by various industry experts, key opinion leaders to gain the deeper insight of the market and industry performance. The report gives the clear picture of current market scenario which includes historical and projected market size in terms of value and volume, technological advancement, macro economical and governing factors in the market. The report provides details information and strategies of the top key players in the industry. The report also gives a broad study of the different market segments and regions.

Who are the competitors owning a share in the automotive supercharger market?

What CAGR is predicted to become evident in the automotive supercharger market?

A 6% CAGR is predicted to spur the development of the market.

Which regions are establishing themselves in the automotive supercharger market?

The rising income level in the North American region is expected to sway the market.

What are the chief factors reinforcing the development of the automotive supercharger market?

The upsurge in demand for high-end cars is likely to transform the market in the upcoming period.

Which segments are created in the automotive supercharger market?

The segments made in the market are on the basis of fuel type, technology, power source, regions, and vehicle type.

What are the 3 types of superchargers?

How much does a supercharger add horsepower?

A supercharger adds a horsepower boost of about 46 percent of the engine's original specs.