The Global Automotive Radar Sensors Market Size is expected to cross USD 9 Billion by 2027 at a CAGR of 19.26% during the forecast period ending in 2027

The global automotive radar sensors market is estimated to witness a 19.26% CAGR during the forecast period.

Radar sensors generally use Frequency Modulated Continuous Wave (FMCW) radar to detect moving or stationary objects. Radar sensors are ideally used for collision avoidance and other technology-driven safety features in the vehicles. They are generally used to identify distance and the speed of the vehicle such as how far away is the object from the vehicle so as to reduce the chance of accident. It emits a radio wave that moves at the light speed and returns the waves back to the radar device. Driver safety is one of the major challenge, currently and will remain so in the future. The use of radar sensors will reduce road accidents and will increase the safety of drivers. They are generally used in Lane Change Assist (LCA), Adaptive Cruise Control (ACC), Autonomous Emergency Braking (AEB), Blind Spot Detection (BSD), Forward Collision Warning System (FCWS), and others.

The automotive radar sensors market is segmented based on range, application, and vehicle type. On the basis of application, the market is segmented as on Lane Change Assist (LCA), Adaptive Cruise Control (ACC), Autonomous Emergency Braking (AEB), Blind Spot Detection (BSD), Forward Collision Warning System (FCWS) and others. Adaptive Cruise Control (ACC) segment is expected to dominate during the forecast period because it allows the vehicle to automatically adjust the speed of the vehicle to maintain the safe distance between two vehicles. On the basis of range, the market is segmented as short range, medium range, and long range. Short range radar sensors segment is expected to dominate the market in future due to the wide use of those sensors in adaptive cruise control systems. 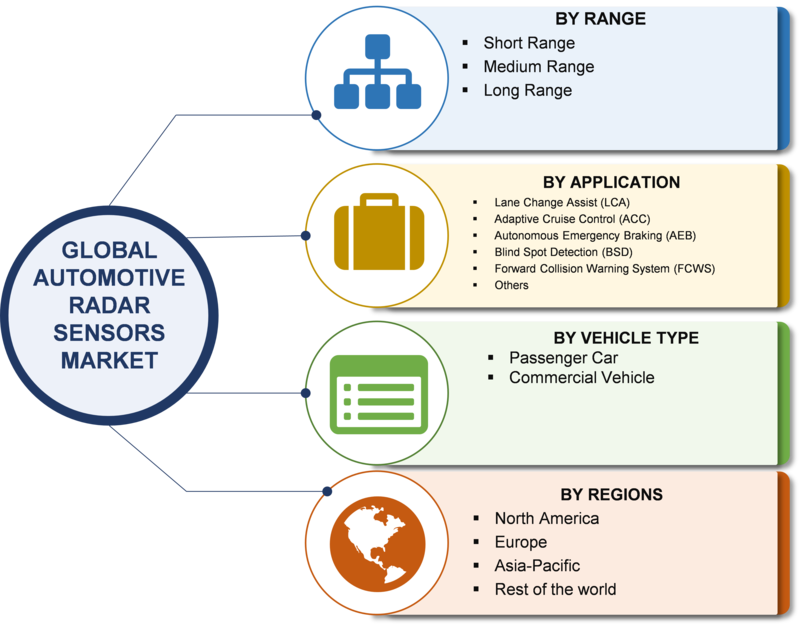 The report for Global Automotive Radar Sensors Market of Market Research Future comprises  extensive primary research along with the detailed analysis of qualitative as well as quantitative aspects by various industry experts, key opinion leaders to gain the deeper insight of the market and industry performance. The report gives the clear picture of current market scenario which includes historical and projected market size in terms of value and volume, technological advancement, macro economical and governing factors in the market. The report provides details information and strategies of the top key players in the industry. The report also gives a broad study of the different market segments and regions.

Who are the competitors owning a share in the automotive radar sensors market?

What CAGR is predicted to become evident in the automotive radar sensors market?

Which regions are establishing themselves in the automotive radar sensors market?

The leader in the regional terms is the North American region in the market.

What are the chief factors reinforcing the development of the automotive radar sensors market?

Rigorous government rules are expected to outline the development of the market.

Which segments are created in the automotive radar sensors market?

The segmentation comprising of range, application, and vehicle type is present in the market.