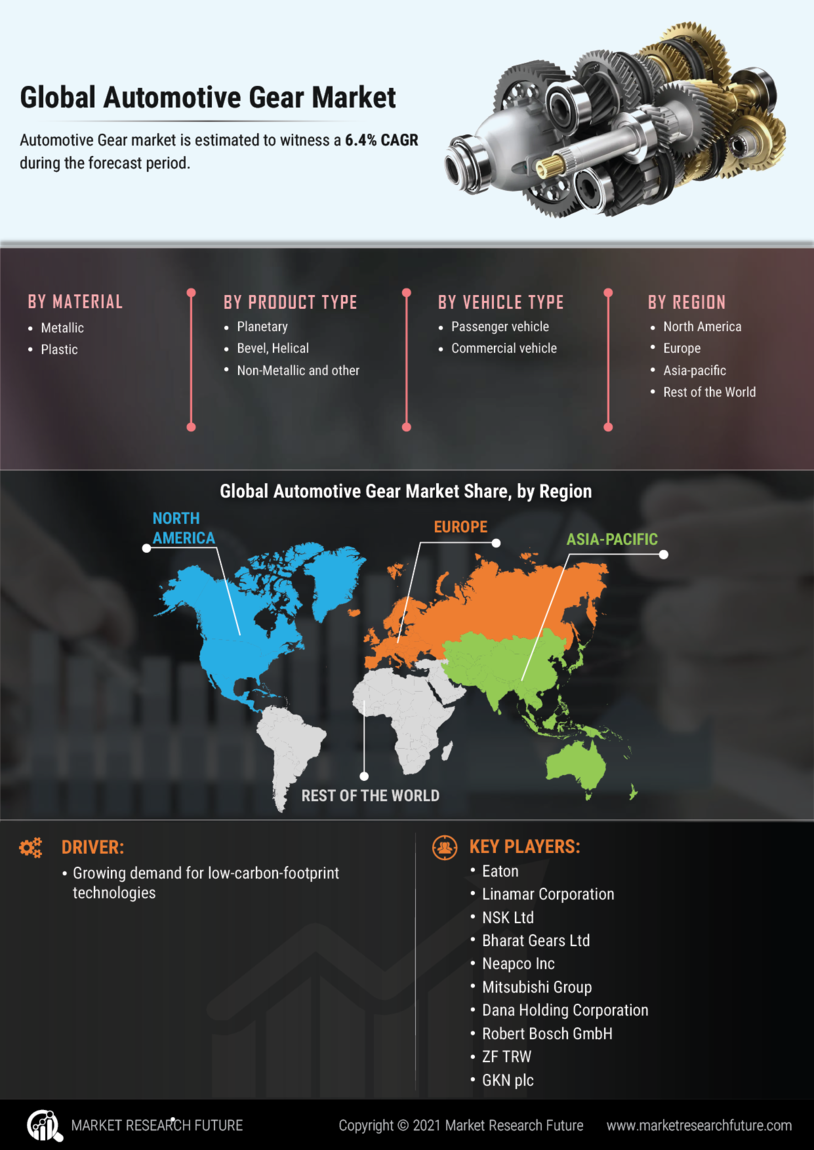 Automotive gear market was valued at USD 28.40 Billion in 2015 and is projected to grow at a CAGR of 6.4% during the forecast period.

The automotive gear Market size exceeded a market sum of USD 28.40 billion during the historic forecast period that had ended in 2019 and is anticipated to witness a growth of over a market CAGR of 6.4% between 2022 and 2030. In addition, there has been a rapid increase in the number of new construction projects in both commercial and residential sectors, with growing urbanization and industrialization supporting industry growth. As a result, the market expects to continuously grow and reach a market value worth USD 38.27 billion.

The outbreak of the COVID-19 pandemic followed by its fatality has spread across the globe. In March 2020, the declaration of coronavirus as a pandemic by the WHO had resulted in lockdowns being implemented in most affected countries. The strict restrictions that global government authorities have imposed have compelled industry players to allow their employees to work remotely and in a virtual manner. However, the adoption of automated developed technologies to minimize human interaction in fields like manufacturing and production facilities is expected to support the widespread growth of the global automotive gear market during the forecast period that will end in 2030. The widespread use of technologies, including automated machinery and advanced electronics in the vehicle field, has ensured the continuous running of businesses during the pandemic and has further enhanced work productivity.

There has been a trend related to the growing sales of gears and related products are likely to play a vital role in generating revenue for the automotive gear industry. The rise in the demand for the products can be attributed to their high usage in the construction of various kinds of vehicles. The market report shows that there has been a massive demand for the products, and hence, the losses during the pandemic are likely to be covered in the period. The fluctuating degree of sales of excavators is further expected to affect the global growth of the automotive gear market over the projected time frame.


The emission equipment segment is expected to be the fastest-growing market during the forecast period. The increasing pollution level is one of the major concerns for the government and OEMs worldwide. Standard emission equipment includes exhaust gas analyzers, diesel smoke meters, and emission testers.


However, the automotive gear market value is likely to be hampered during the ongoing forecast period ending in 2030. The trends suggest that the global market is likely to witness a decline in sales because of the virus outbreak, which has targeted the employment of people.


There has been a rapid increase in the urban population demanding better infrastructure facilities. It is a prominent factor that is expected to positively impact the automotive gear market demand over the forecast period as projected by the market experts and chiefs. In addition, the implementation of various global government initiatives is undertaken to develop infrastructure. There has been an increase in investments in the construction industry followed by the rising disposable income that is enhancing the purchasing power of the global target audience. These market factors are projected to drive consumption of the global automotive gear market from 2022 to 2030. There has been a substantial rise in the need for better connectivity, vehicle functioning, and enhanced facilities are also anticipated to drive the industry. An increase in the degree of globalization and demand related to qualitative gears owing to the rising international competition is also expected to create a favorable environment for foreign direct investment, which is estimated to enhance technology employment, followed by the market's growth in the forecast period that ends in 2030.

By Application, the market has been segmented as follows:


By Product Type, the market has been segmented as follows:


By Vehicle Type, the market has been segmented as follows:


By Material, the market has been segmented as:

Based on the region, the market has been segmented as follows:

The Asian Pacific region is gaining a lot of market popularity owing to its rising interest in the development of the automotive gear market. The region is estimated to account for the largest market share, in terms of value, in 2015, with China being a key contributor to the growth of the automotive gears market in the region. A Passenger Car (PC), as defined by the OICA, can be understood as a motor vehicle equipped with at least 4 wheels, comprising not more than 8 seats. The PC segment of the globally functional market is the largest, by vehicle type, and includes sedans, hatchbacks, station wagons, Sports Utility Vehicles (SUVs), and Multi-Utility Vehicles (MUVs). This vehicle segment is soaring high on investments and is the most promising market for electric vehicles as it is the largest segment in the automotive industry.

The automotive gear market is witnessing a steady growth in the global competition due to the efforts pooled in by the understated companies:

In August 2015, one of the prominent market companies - GKN Sinter Metals unveiled its newly renovated facility in St Mary‘s, U.S. The refurbishment comprises of numerous renovations of the training and development center and a state-of-the-art innovation showroom; and trends suggest that this development is part of the company‘s expansion policy for the North American region.

In November 2014, AAM took to the international scale and launched a new rebate promotion for its 8.6" gear sets. This set of gears is designed for a variety of General Motors vehicles with a 10-bolt rear axle. Each differential gear kit that has been introduced in the market contains authentic side and pinion gears that were included with the axle when the vehicle was built.

In February 2014, RSB followed the innovative needs of the market and launched manual/power steering gears and other major automotive components such as steering rack and pinion, tie rod, hydraulic pumps, and aluminum pumps.

The HCV segment of the global market comprises trucks/lorries, buses, and coaches. Vehicles having an authorized mass of more than 7 tons are called heavy commercial vehicles. HCVs combine 2 categories of vehicles namely heavy trucks and buses and coaches. The nature of these functional vehicles limits their production volume and growth rates as they are used in specific applications such as logistics, construction, and mining industries

GKN plc is emerging as one of the largest automotive component suppliers in the world. The global company is focusing on expanding its geographical presence, which would help it tap new market opportunities. Through consistent expansion in the Asian pacific region, it is investing in high growth potential markets such as China, India, and Southeast Asian countries.

The report for the automotive gear market has been prepared after extensive primary research and a detailed analysis of qualitative and quantitative aspects by various industry experts. In addition, the report provides information and strategies that are a part of the top key players in the industry. The report also helps in providing a comprehensive study of the different market segments and regions. The research methodology used in the curation of this report involves various secondary sources, including paid databases and directories. Global market researchers and experts from related industries and suppliers have been interviewed to understand the future trends of the automotive gears market. They have invested in the bottom-up approach that has been used to estimate the market size, wherein country-wise vehicle production statistics have been taken into account for each vehicle type.

What incentives are crafting a favourable background in the automotive gear market?

The surging demand to own vehicles is expected to create favorable market traction.

Who are the businesses opposing each other in the global automotive gear market?

What CAGR is estimated to be produced in the automotive gear market?

A 6.4% CAGR is estimated to shape the market in the forecast period.

What is the revenue grossing prospective for the automotive gear market?

The market is expected to increase its revenues considerably in the coming period.

What regions are taking responsibility in the automotive gear market globally?

The region in the Asia Pacific is expected to maintain its lead in the global market in the forecast period.