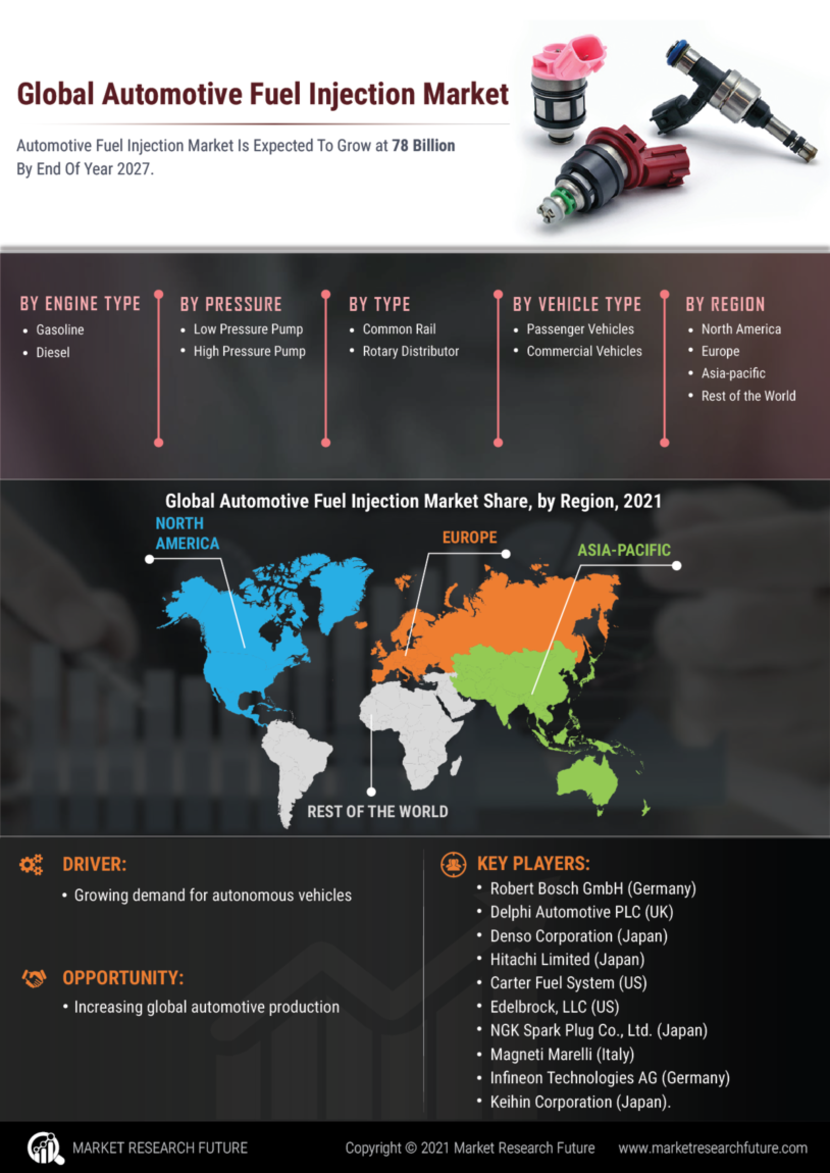 According to the latest research report, the worldwide automotive fuel injection market size is expected to reach USD 78 billion by 2025, expanding at a CAGR of 6% during the forecast period.

The fuel injection system's function is to calibrate and optimize the fuel/air ratio that enters the vehicle's engine. Electronic components and sensors make up the injection system. It must be properly adjusted to maximize engine power and efficiency while lowering gas consumption. In gasoline engine automobiles, the fuel injection system is generally indirect, with gasoline injected into the input manifold or inlet port rather than directly into the combustion chambers. This ensures that the fuel and air are well mixed before entering the chamber. However, gasoline direct injection is a sophisticated injection technology for gasoline engines that delivers better performance as well as considerable fuel consumption and pollution savings. The majority of diesel engines, on the other hand, employ direct injection, in which diesel is injected straight into a cylinder filled with compressed air.

The introduction of gasoline into an internal combustion engine is commonly referred to as automobile fuel injection. This is usually done with the fuel injector. The fuel injection system is commonly utilized to provide consistent and smoother throttle response as well as improved fuel economy. The use of fuel injection systems generally eliminates the requirement for a mechanical choke. The need for vehicle fuel injection systems is being driven by the ever-increasing worldwide automobile manufacturing. Furthermore, strict environmental rules governing car emissions and the growing demand for fuel economy are propelling the market. The move to electric cars, the short lifespan of injectors compared to carburetors, unpredictable raw material prices, and variation in crude oil prices are limiting the worldwide market for automotive fuel injection market growth. However, the fast expansion of the automotive sector in developing areas and the rising demand for autonomous cars are offering chances for growth.

This report contains all the information on the global automotive fuel injection market outlook and its strengths. The report also contains the culmination of dynamics, segmentation, key players, regional analysis, and other important factors. And a detailed analysis of the global automotive fuel injection market forecast for 2027 is also included in the report.

Automotive is one of the industries that has been negatively impacted by economic conditions and customer behavior. The year 2019 saw a drop in new car manufacturing in several areas of the world, including important markets like Germany, China, and India. The industry was expecting f revival in 2020 to replace the void left by the breakout of COVID-19, but the epidemic has dashed those aspirations and created a worrying scenario for industry stakeholders due to its widespread effect. The automobile fuel systems industry is an exception, and it is expected to follow a pattern similar to new vehicle production.

These businesses have prioritized new product releases, facility expansions, and strategic acquisitions in the automobile fuel injectors industry. To seize fresh possibilities, the top six businesses have relied on joint ventures, particularly in emerging markets. Federal-Mogul Corporation, for example, is heavily investing in India and has formed two new joint ventures, one in China and one in Thailand, both concentrating on the aftermarket for automobile fuel injectors.


Market growth is likely to be constrained by factors such as high maintenance costs and strict safety requirements linked to fuel injection systems. Another issue that is predicted to slow down the growth of the target market is the growing complexity of fuel injection system services across various service providers.


Companies are looking for alternative solutions due to growing worries about fuel efficiency, rising fuel prices and environmental restrictions, and vehicle exhaust emissions. This can be considered as a major challenge for the key players of the global automotive fuel injection market. In the case of gasoline engines, gasoline direct injection technology may provide all of these benefits at a low cost. In both developed and emerging nations, this technology has already begun to earn a considerable market share over gasoline port fuel injection technology. Diesel direct injection technique is widely used across the world.

The market is segmented based on components, fuel types, technology, sales channels, vehicle types, and regions. The global automotive fuel injection market trend is expected to witness decent growth during the forecast period.

Based on the application, the market is segmented into electronic control units (ECU), fuel injectors, pressure regulators, fuel pumps, and sensors.

Based on the propulsion types, the market is segmented into passenger cars and commercial vehicles.

According to reports, The worldwide automobile fuel injection market has been divided into four key regions: North America, Europe, Asia-Pacific, and the rest of the world. The Asia-Pacific region is anticipated to expand at a quick rate during the forecasted period, owing to rising disposable income and purchasing power, particularly in countries such as China and India, which are driving the automotive fuel injection market share. North America is expected to expand significantly throughout the forecast period due to rising demand for vehicle fuel injectors for off-road applications. The market in Europe is expanding as a result of severe car emission standards and high after-sales demand. Furthermore, the automotive fuel injections industry has grown in recent years, with manufacturers choosing for the technology to fulfil Europe's severe car emission rules.

What is the predicted revenue generation of the automotive fuel injection market?

The global automotive fuel injection market is poised to record a market value of USD 78 Billion by 2025.

At what growth rate is the automotive fuel injection market evolving?

The global automotive fuel injection market is maturing at a moderate 6% CAGR over the assessment period of 2017 to 2023.

Who are the major market giants operating in the global automotive fuel injection market?

Which vehicle type segment of the automotive fuel injection market is observing the fastest growth?

The commercial segment is expected to drive market growth over the review period.

Which component segment of the automotive fuel injection market is expected to witness the highest demand?

The ECU segment is likely to witness the highest demand in the automotive fuel injection market.

Automotive Fuel Injection Global Market Prognosticated To Accrue With A Whooping Cagr By 2027; As...