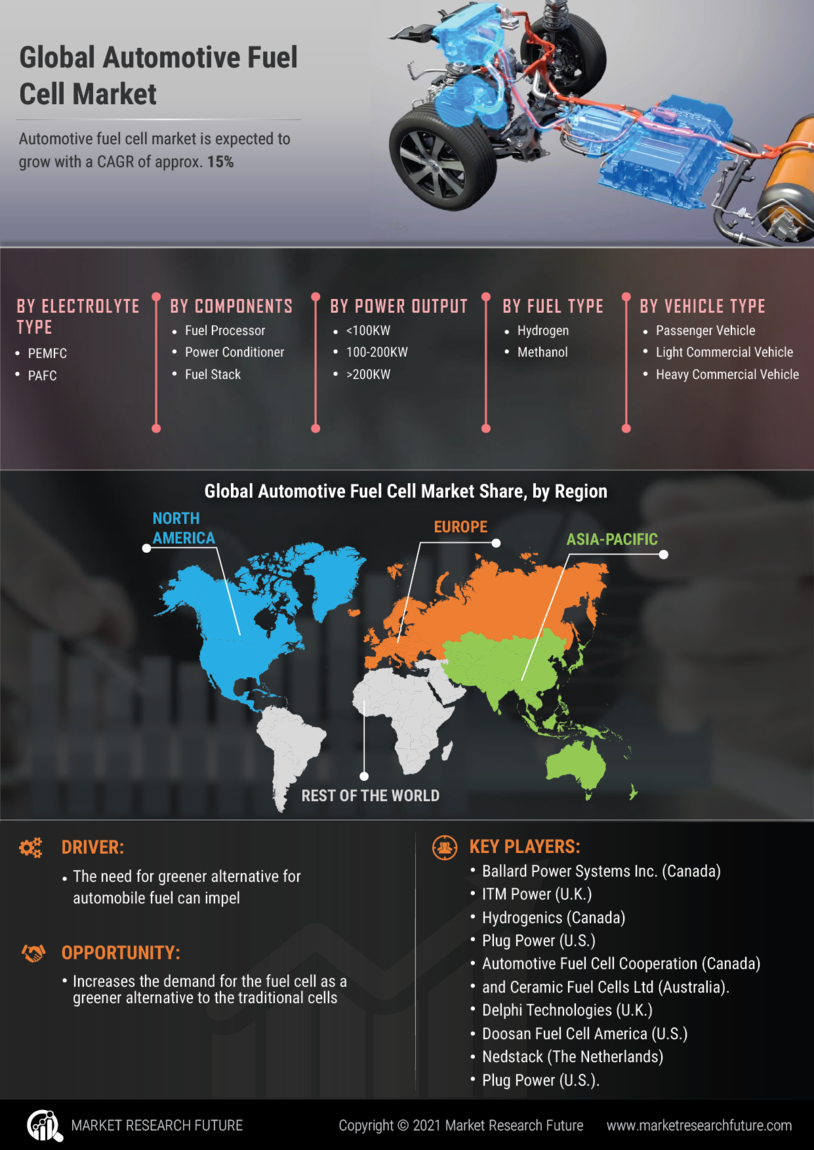 On the basis of the electrolyte type, the PEMFC (Proton-exchange membrane fuel cell) is preferred compared to the PAFC (Phosphoric Acid Fuel Cell). PEMFC produce near-zero emissions and thus aid in limiting the greenhouse gases substantially. PEMFC cells are lightweight, easy to install, highly portable, have a high power density, can be used in varying operating temperatures and are highly efficient. On the basis of the components, the power conditioner is widely used due to its constant power generation capacity. The fuel processor component requires constant monitoring and routine maintenance. On the basis of the fuel type, the hydrogen-powered cells are able to generate high power, and are small in size. The methanol fuel cells comparative to the hydrogen variety are easily available, easy to transport, generate low power and involve lesser costs. On the basis of power output, the 100-200 KW variety is the most widely produced, since it gives the highest output at a given cost. 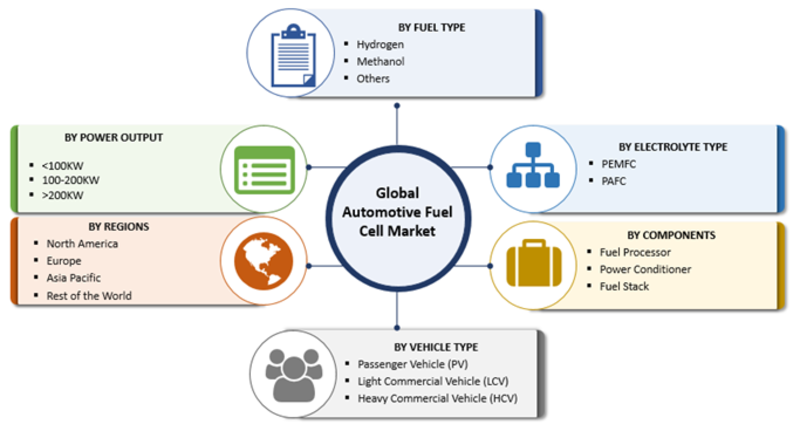 On the basis of region, the market is segmented into North America, Asia Pacific, Europe, and Rest of the World. Asia Pacific region is expected to drive sales of the automotive fuel cell global market, making it a continually growing market. The governments of countries such as China, Japan and Hong Kong are encouraging the use of renewable energies backed with favorable policies to restrict the ill effects of global warming. North America region is taking steps to reduce the carbon footprint due to a large number of vehicles plying on the roads. The high demand for passenger vehicles and heavy commercial vehicles increases the demand for the fuel cell as a greener alternative to the traditional cells.

The automotive fuel cell technology is an attractive proposition for automakers, which helps them manufacture high energy cells capable of powering the automobiles. The fuel cells use either hydrogen or methane as the primary energy provider. Both these elements are cleaner sources of fuel, as against the conventional lithium-ion battery cells, which cannot be recycled. The lithium-ion battery cells pose the problem of disposal, thus impacting the environment considerably.

Several factors aid the growth of the automotive fuel cell global market. Firstly, the automakers are making conscious decisions to reduce the carbon footprint to compensate the large automotive sales. Secondly, governments of developed nations are taking concrete steps to reduce the global warming by turning to cleaner and greener alternatives of fuel. Thirdly, the conventional cell technology poses a considerable threat for the physical wellbeing of the user, if not handled with care.

The report for Global Automotive Fuel Cell Market of Market Research Future comprises of extensive primary research along with the detailed analysis of qualitative as well as quantitative aspects by various industry experts, key opinion leaders to gain the deeper insight of the market and industry performance. The report gives the clear picture of current market scenario which includes historical and projected market size in terms of value and volume, technological advancement, macro economical and governing factors in the market. The report provides details information and strategies of the top key players in the industry. The report also gives a broad study of the different market segments and regions.

At what CAGR can the automotive fuel cell market expand?

What is the estimated valuation for the automotive fuel cell market?

The automotive fuel cell market valuation can touch a decent amount by 2023.

Who are the key players of the automotive fuel cell market?

What is the automotive fuel cell global market growth driver?

The need for greener alternative for automobile fuel can impel the automotive fuel cell market growth.

What is the regional analysis of the automotive fuel cell market?

The need for passenger vehicles is surging in APAC, which can spur the automotive fuel cell market growth.