Of the three type segments, the synthetic oil coolant variety is expected to grow the fastest. This is because these coolants enhance the driving experience of high-performance cars. In terms of the affordability and easy access, the hybrid variety is most sought after since it combines the properties of both the types. The organic component in the hybrid variety aids in avoiding corrosion of metal components, while the synthetic variety helps in boosting performance. In the types of cooling mechanisms, the most affordable and easy to fit is the air-cooled variety, while the most economical and effective is the water-cooled type. By function, the ideal engine oil coolant would be the one that acts for a dual purpose – engine cooling and corrosion resistance of metal parts. Concerning end market, OEMs segment try to form a deal with the automakers to maximize sales and to compel the consumers to keep the continuity in the oil variety used. In the vehicle type segment, the long haul running and 24x7 operating heavy commercial vehicles need immaculate and precise engine oil coolant solutions owing to the work and vehicle load that is at stake. 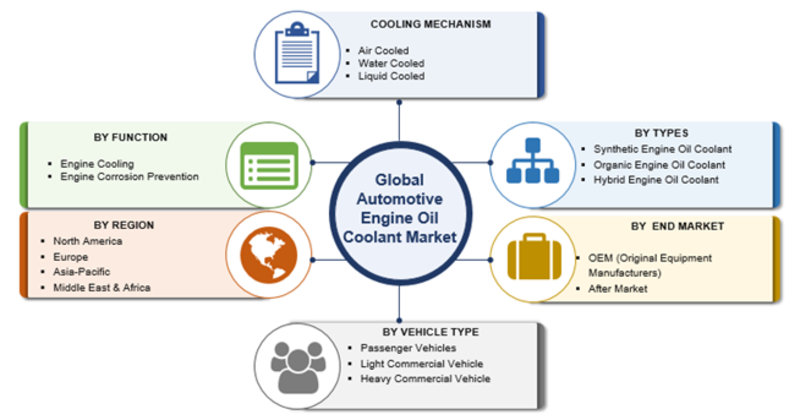 On the basis of region, the market is segmented into North America, Asia Pacific, Europe, and Rest of the World. In North America (particularly in the U.S. and Canada), the general trend of consumers is to own an automobile, per individual. The trend of owning large SUVs and sedans is also on the rise, owing to which a high demand for these systems is created. The Asia Pacific market has seen a rise of bigger and powerful vehicles as well. Also, these countries fall in the tropical region / the hot climatic conditions. Thus the engine oil coolant in these markets is very high. The Europe market is home to a few of the trendiest and the most powerful automakers in the world. The high torque produced by these cars, makes it imperative for kicking in a system like an engine oil coolant for optimum vehicle performance.

The report for Global Automotive Engine Oil Coolant Market of Market Research Future comprises extensive primary research along with the detailed analysis of qualitative as well as quantitative aspects by various industry experts, key opinion leaders to gain the deeper insight of the market and industry performance. The report gives the clear picture of current market scenario which includes historical and projected market size in terms of value and volume, technological advancement, macro economical and governing factors in the market. The report provides details information and strategies of the top key players in the industry. The report also gives a broad study of the different market segments and regions.

At what CAGR can the automotive engine oil coolant market expand?

The automotive engine oil coolant market can surge at 11% CAGR by 2023.

What is the estimated valuation for the automotive engine oil coolant market?

By 2023, the automotive engine oil coolant market can experience a decent hike in its valuation.

Who are the key players of the automotive engine oil coolant market?

What are the automotive engine oil coolant types?