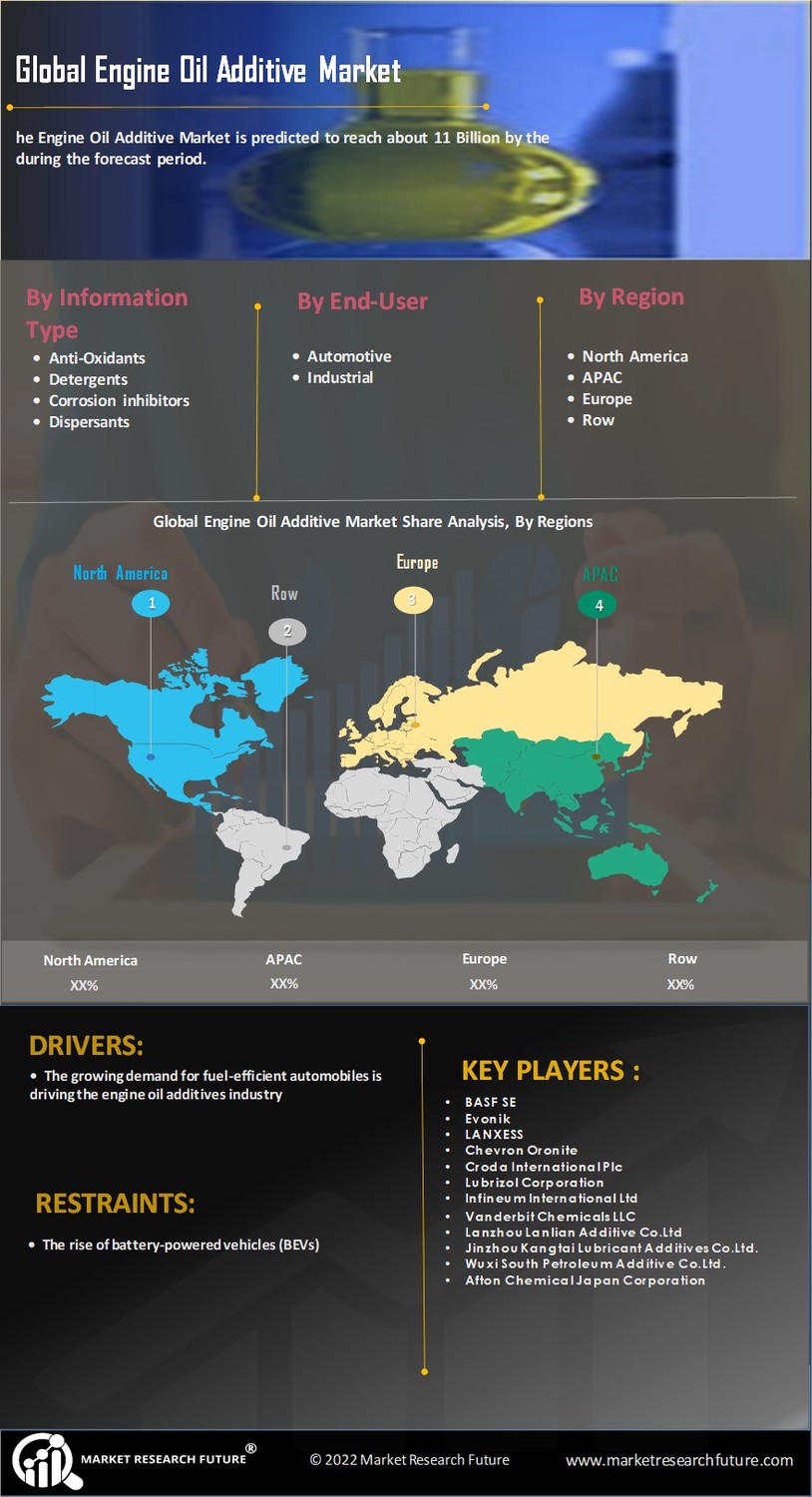 According to the latest research report, the Engine Oil Additive Market is predicted to reach about 11 Billion by the end of the year 2027. Chemical substances which are used to improve the performance of engine oils are known as engine oil additives. Additives are chosen for their capacity to accomplish certain tasks when combined with other additives. They're designed to work with a certain base oil and for a certain purpose. Antioxidants, dispersants, detergents, anti-wear agents, viscosity modifiers, demulsifiers, and extreme-pressure additives are among the most common types of functional additives. The automobile sector is the greatest end-use application of engine oil. Furthermore, engine oil additives are used in a variety of industrial applications, such as metalworking fluids, industrial engine oils, and so on.

With considerable research on the development efforts undertaken by top manufacturers for producing oil additives and improved base oil, the engine oil additives market is increasing considerably. This study was primarily concerned with assessing the growth of oil, which has the potential to raise the mechanical efficacy of internal combustion engines by 10% by preventing additional wear or injury to the emission after-treatment system. Along with that the rising automotive industry and industrialization in a developing country are adding fuel to the growth of the Engine Oil Additive Market. However, changing oil costs and tight government restrictions are expected to stymie worldwide industry expansion. Furthermore, the burgeoning Latin American automobile sector and rapid industrialization in emerging nations are likely to provide profitable growth possibilities over the assessment period.

This report contains all the information on the Engine Oil Additive Market research and market strengths. The report also contains the culmination of dynamics, segmentation, key players, regional analysis, and other important factors. And a detailed analysis of the global engine oil additive market and forecast for 2027 is also included in the report.

The COVID-19 pandemic has had a massive impact on people's lives all over the world. Every firm must fight on two fronts—health and financial must weather this period of forced recession. With the global recession costing hundreds of billions of dollars, there is mounting evidence that the recovery time will last well into early next year.


The rise of battery-powered vehicles (BEVs) is a major restraint to the Engine Oil Additive Market. The fluctuation in the prices of the raw materials is another big restraint of the global engine oil additive market.


Extended engine oil drain intervals and the small influence of electric cars in the future are major challenges that are impacting the growth of the Engine Oil Additive Market, generating a negative influence on demand for the engine oil industry.

The automobile and other transportation segments use the most engine oil. Engine oils, which are often used to lubricate internal combustion engines, are made up of 75-90 percent basic oils and 10-25 percent additives. Furthermore, worldwide sales of electric cars climbed by 39 percent year over year in 2020 to reach 3.1 million units, while overall passenger car sales decreased by 15.9 percent from 63.73 million units in 2019 to 53.59 million units in 2020, which is likely to impede engine oil additive market growth.

According to the reports, the Engine Oil Additive Market is segmented on the basis of types, end-users, and regions. On the basis of type, the Engine Oil Additive Market is further distributed into anti-oxidants, detergents, corrosion inhibitors, dispersants, friction modifiers, and others. Anti-oxidants prevent the oxidation of oils. Anti-oxidants include zinc dithiophosphate (ZDP), alkyl sulfides, aromatic sulfides, aromatic amines, and hindered phenols. This sector has the biggest market share and is predicted to develop significantly due to rising demand from end-use industries. Detergents neutralize the lubricant's strong acids and remove the neutralization products from the metal surface. Engine oils frequently include detergents. Some of the most frequent materials used as detergents include phenolates, sulphonates, and alkaline phosphonates. Corrosion inhibitors generate a barrier coating on the surface of the substrate, slowing the rate of corrosion. In addition, the inhibitors soak on the metal surface, generating a layer that protects the component from the assault of oxygen, water, and other chemically active substances. Alkaline chemicals, amino-acid, ester, and organic acids derivatives are some of the most prevalent corrosion inhibitors. Dispersants are used to keep foreign particles in a lubricant, such as sludge and varnish, dirt, and oxidation products, isolated. Long-chain hydrocarbons and succinimides are examples of common dispersants. Friction modifiers lower the coefficient of friction, which results in decreased fuel usage. Graphite, molybdenum disulfide, boron nitride, and other friction modifiers are examples. Anti-wear additives pour point depressants, viscosity index improvers, anti-foaming agents, and other additives are included in the others segment.

On the basis of End-User, the Engine Oil Additive Market is segmented into automotive, industrial, and others. In the engine oil additive market, the automotive segment maintained the biggest market share. Engine oil additives are widely utilized in the automotive sector, including passenger cars, trucks, motorbikes, and other vehicles. In the engine oil additives market, the industrial category grew the fastest. The segment's rise is primarily related to expanding industrialization, particularly in Asia-emerging Pacific nations, and increased demand from different end-use sectors for maintaining and safeguarding their equipment and machinery. Other areas include the maritime, aviation, and railway sectors, among others.

The market is segmented on the basis of the types, end-users, and regions. The Engine Oil Additive Market is expected to witness decent growth during the forecast period.

Based on the application, the Engine Oil Additive Market is segmented into antioxidants, detergents, corrosion inhibitors, dispersants, friction modifiers, and others.

Based on the propulsion types, the Engine Oil Additive Market is segmented into automotive, industrial, and others.

According to the reports, on the basis of region, the Engine Oil Additive Market is segmented into North America, Europe, Asia-pacific, the middle east & Africa, and Latin America. Due to the extreme region's large-scale manufacturers, tight regulations, and established automotive sector, the North American market is the largest engine oil additive market. Stringent government standards, modern technology, and well-established enterprises in Europe are driving demand for the engine oil additive market. Asia-Pacific is the fastest-growing regional market because of the region's expanding automobile sector. Emerging economies such as India, China, and Thailand have the most potential for growth. The demand for Engine Oil Additive is expanding in Middle East & Africa as a result of the increased emphasis on enhancing industrial production and increased awareness among end-users. The Latin American market for Engine Oil additives is expected to grow significantly owing to rising demand from the region's key end-use industries.

The Engine Oil Additive Market is quite fragmented due to the presence of major key players in the market. These players are focused on manufacturing cost-effective products and to strengthen their roots in the global market they are focused on mergers and acquisitions, new product launches, etc.

Exponential growth of Engine Oil Additives industry is expected to boost the global market at a C...