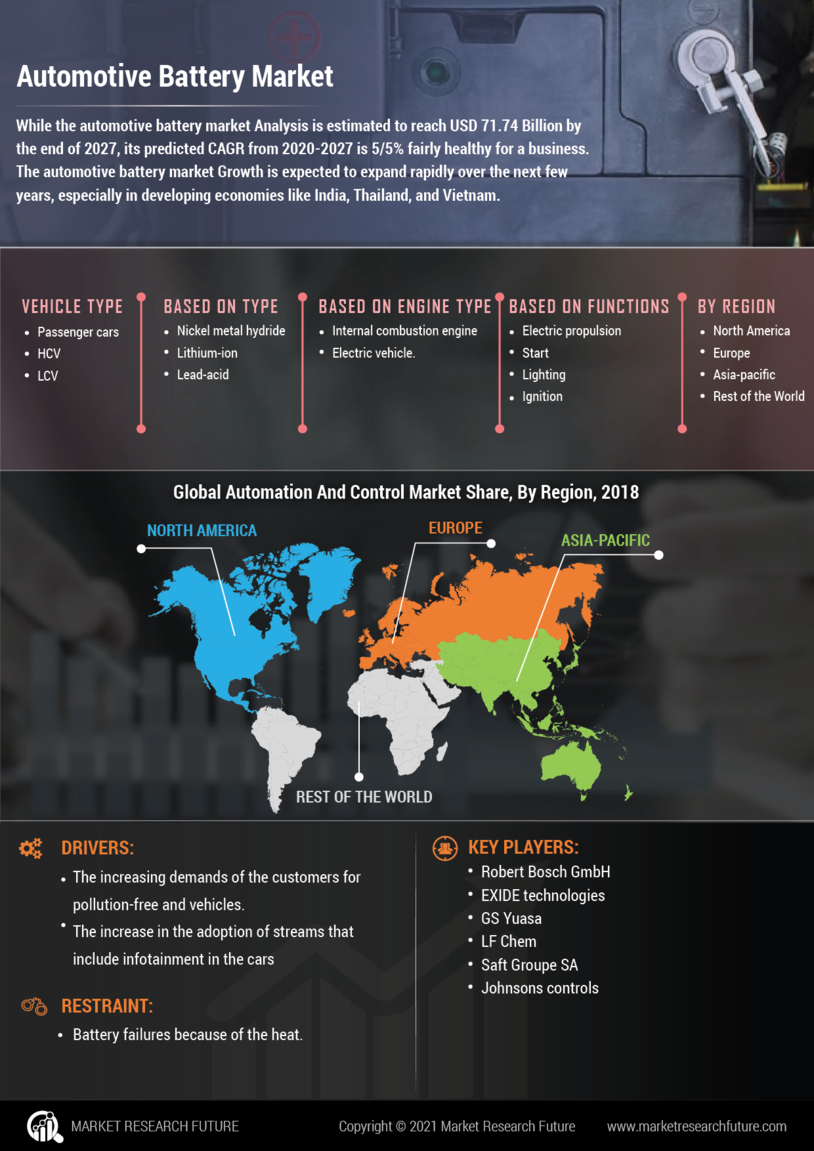 The primary factor that has played a crucial role in the automotive battery industry growth is the increasing demands of the customers for pollution-free vehicles that follow strict standards laid down by the government concerning environmental protection. The increase in the adoption of streams that include infotainment in the cars has also led to the rise in these batteries' demand.

Apart from the factors that promote growth, there are some restraints as well. This includes still developing support infrastructure for electric vehicles. Battery failures because of the heat are amongst few other factors restricting the growth of the automotive battery market Trends.

COVID 19 has bought a change in the lives of everyone. Be it the individuals or the organizations. The pandemic has taken humanity to a stage where they have been finding themselves a few years back. The main focus is to get back on track and cope with all the loss that this deadly virus has bought into the business globally. This might seem easy, but it is not. It needs research, study, and in-depth analysis of every small thing that affects the organizations’ smooth running. The experienced analysts have prepared the report based on their experience and knowledge after analyzing the current automotive battery market Size situations.

The market Growth is expected to expand rapidly over the next few years, especially in developing economies like India, Thailand, and Vietnam. Further, there has been an increase in the demand for pollution-free electric vehicles, which is one of the main reasons for the growth of the automotive battery market Outlook in the forecast period.

According to the industry standards, an ideal automotive battery should have certain features, including the adequate capacity of the reserve, which makes the users know the ability of the battery to hold the electrical energy, which in turn delivers the performance is. The market’s driving factors have been increased demand for automotive vehicles because of the awareness among the people across the globe about no or negligible ill effects it causes to the environment.

For the success in the manufacturing of an EV, it requires support in the policies laid down by the state, federal and, area administration—this helps in achieving the goals that have been set for a longer duration. The EV providers are also expected to develop a platform that stands uniform for everyone and provides immense support to the EVs. If the regulatory policies favor the providers, it can give an incredible amount of boost in electric vehicles’ selling. This subsequently can make the automotive battery market Size increase over the forecast period. It’s not just the policies but also the increase in demand clubbed with other factors that have proved to be a significant factor that has helped it gain popularity in the market. This would help the automotive battery market Growth flourish even more. While new laws and regulations are on the way, there is more possibility of reaching the heights of success.

The automotive battery market has been divided into the following segments:


Market-based on vehicle type: This is further divided into the following subcategories:


Based on type: This segment is subdivided into the following:


Based on engine type: This is further divided into:

Based on functions: This segment is further divided into the following subtypes:

Based on sales channel: This segment is further subdivided into:

Out of all these subtypes, the Lithium-ion subdivision dominates the automotive battery market Value because of the fact that it is much lighter in weight and hence is suitable for two wheels like scooters and motorcycles. They are ideally suitable for such vehicles.

The market is divided into the following major regions. These are:

North America dominates the automotive battery market Outlook because all the strong lead-acid battery manufacturers are located in the region, which leads to the increasing demand for electric vehicles. The area also has strict norms towards using eco-friendly products, ensuring that the market Share gets a sharp rise.

The Asia Pacific is expected to be the region that would have the fastest growth of the automotive battery market Value because of the increasing demand for such vehicles and high sales of passenger cars, commercial cars, and motorcycles.

All the key players have been focusing on the developmental aspects of the automotive battery market Revenue. They have planned things strategically to ensure that the markets get to the top. They have been looking forward to saving the environment and providing the best user experience simultaneously. The focus is not only on themselves but they have been on the industry as a whole. With new innovations and technological advancements, they have bought the industry to a level where all the newcomers have a preset level to work on.

While the battery used in the vehicles changes the electrical current into chemical energy, it plays a vital role in the smooth running of the car. The primary function that a battery plays in automobiles is to start the vehicle by feeding the engine. Growing at a CAGR of 5.61% during the forecast period, the automotive battery market Analysis is expected to touch a whopping USD 115.23 billion mark by the end of 2027. The fact that the demand for hybrid and fully electric vehicles are on the rise ensures the market Trends grow quickly. Other factors that pull back its growth include the safety issues related to using the batteries and the vehicles' underdeveloped infrastructure. But with the development in countries like India, China, Myanmar, and Indonesia, the demand for electric cars has been increasing. Therefore, it is also experiencing growth in such regions.

At what rate can the market expand in the coming years?

The market is slated to expand at a steady rate of 6.57% in the coming years.

What is expected to be the market size by 2030?

Who are the top players in the global market, as listed in the report?

Which factors are backing the market growth?

Soaring demand for semi-hybrid, hybrid, and fully electric vehicles along with the rising adoption of automotive battery in passenger vehicles back the market growth.

What factors enhance the growth of the North American market?

The enhancing the growth of the North American market include strict regulations, mounting demand for environment-friendly vehicles along with the presence of some of the most well-known players like Johnson Controls, Odyssey and Exide.