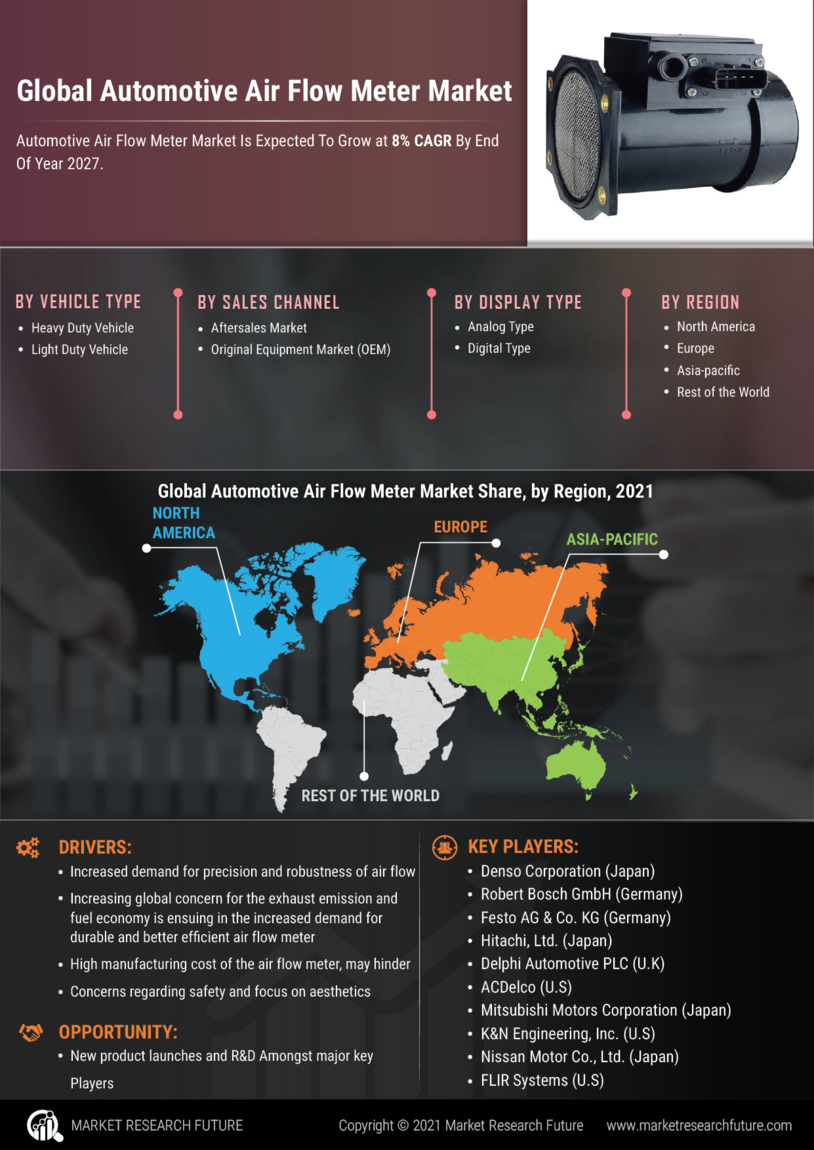 The Global Automotive Air Flow Meter Market Size is expected to grow at a CAGR of 8% to reach USD 8,290 Million during the Analysis period 2022 - 2030.

The volume of intake air flowing into the automobile system is commonly measured with an airflow meter. The ability to measure and detect both forward and backward flow with equal sensitivity is a key feature of the automobile airflow meter. The growing demand for integrated electronics systems in the car sector has resulted in technological advancements in the automotive electronics market, with comfort, safety, and security features taking precedence. The driver receives essential information from components such as the airflow meter, fuel meter, and pollution regulating system, which helps them manage fuel usage and maintain engine efficiency with Automotive Air Flow Meter Market Growth. For the vehicle carburetor and catalyst to function properly, an automobile engine must have an exact mixture of air and gasoline. This is necessary for the carburetor and catalyst in the vehicle to convert particle pollutants in the exhaust into innocuous gases.

Lockdowns enacted in the majority of countries have had a detrimental influence on the Automotive Air Flow Meter Market Share in recent months. Since the COVID-19 outbreak in December 2019, these lockdowns have caused the production of autos to be temporarily halted. In addition, numerous countries had curfew-like situations in which non-authorized individuals were not allowed to travel, reducing demand for automobiles. The volume of air intake flowing into the automobile system is measured using airflow meters. The ability to measure and detect both forward and backward flows with equal sensitivity is a key feature of the vehicle airflow meter during the Automotive Air Flow Meter Market Analysis. The car industry's growing demand for integrated electronics systems has resulted in technological advancements as well as advances in comfort, safety, and security features. Airflow meters, fuel meters, and emission regulatory systems provide critical information to the driver, allowing them to measure fuel use and maintain engine efficiency. An automobile engine requires a precise mix of air and fuel so that the carburetor and catalyst can effectively convert particle pollutants in the exhaust into innocuous gases increasing the growth of the Automotive Air Flow Meter Industry.


However, sales of such components utilized in ICE vehicles are being hampered by the steady rise in demand for electric vehicles. Furthermore, rising labor costs are causing Automotive Air Flow Meter's profit margins to shrink, which is expected to be a concern for the business. The high manufacturing cost of the airflow meter, on the other hand, may limit the market's growth.


Electric vehicle market penetration has been witnessed across the globe by the automotive sector. Government subsidies and perks, such as those granted by India's government, are pushing consumers to buy electric automobiles. Multiple emerging technologies, including IIoT, asset management, and improved diagnostics, are also assisting users and suppliers in forging new alliances. Furthermore, end-user and supplier strategies have benefited from developments in networking and cloud platforms, as well as service offerings that integrate data and analytics. Digital signals for flow meters, numerous measurement formats, online diagnosis and troubleshooting, remote calibration and configuration, and smart sensors with online warnings are all major advancements in flowmeter technology. The Automotive Air Flow Meter Industry has also been able to create acceptable solutions to complicated operating problems because of technological breakthroughs made possible by solid research and development.

Based on the vehicle type, the market has been segmented as:

Based on the sales channel, the market is segmented as:

Based on the display type, the market is segmented as:

Based on the region, the market is segmented as:

The automotive air flow meter market is currently led by North America, with Europe and the Asia Pacific following closely behind. After European countries, the United States is one of the most regulated countries. The flowmeter market is dominated by the oil and gas, water and wastewater, and renewable energy industries. According to the Center for Sustainable Systems at the University of Michigan's US Renewable Energy Factsheet, around 80% of the country's energy comes from fossil fuels, 8.4% from nuclear power, and 11.4 percent from renewable sources. In comparison to thermal meters, alternative technologies such as multipoint averaging pitot tubes and ultrasonic flow meters are being investigated more in the United States. The number of hydroelectric projects in Canada is increasing. Canada was the world's fourth-largest producer of hydroelectricity, according to the International Hydropower Association. Cascadia has been providing the Canadian market with flow meter systems in more than 25 hydropower facilities for the past 20 years as a result of this growing demand.

Because there is no single dominant company, the market is highly fragmented and competitive. As a result, there is a minimal level of market concentration. The major Automotive Air Flow Meter Market Key Players are as follows:

Emerson has announced the release of a new Micro Motion Coriolis flowmeter for high-pressure hydrogen dispensing and chemical injection applications. It can measure gas mass flow with a flow accuracy margin of 0.5 percent and liquid mass flow with a margin of 0.1 percent.

The Sensyflow FMT700-P Compact thermal mass flow meter was introduced by ABB. The P-Compact is used to evaluate the performance of hydrogen fuel cells as well as typical turbochargers and components such as throttle valves, intake fans, and air filters.

The research gives an analytical portrayal of the airflow sensor market, as well as current trends and future projections, to identify potential investment opportunities. The research discusses the market's major drivers, constraints, opportunities, and challenges, as well as the market's key drivers, restraints, and opportunities. To highlight the automotive mass airflow meter market growth scenario, the existing market is statistically examined. The study examines the airflow meter market in-depth, focusing on competitive intensity and how the market will evolve in the future years. Flow meters are rapidly being utilized in coal-fired, fuel oil and natural gas, hydroelectric, geothermal, and nuclear power plants due to their numerous advantages.

At what CAGR can the automotive air flow meter market expand?

The automotive air flow meter market can expand at 8% CAGR by 2030.

What is the estimated valuation for the automotive air flow meter market?

MRFR study reveals that the automotive air flow meter market can attain a considerable value of USD 8,290 Million by 2030.

Who are the key players of the automotive air flow meter market?

What is the automotive air flow meter market growth driver?

The growing utility of automotive air flow meter in the automobile industry can encourage the market expansion.

What is the regional analysis of the automotive air flow meter market?

In APAC, air pollution is seriously impacting lives of people, which is encouraging the need for automotive air flow meter. Thus, can impel the regional market expansion.