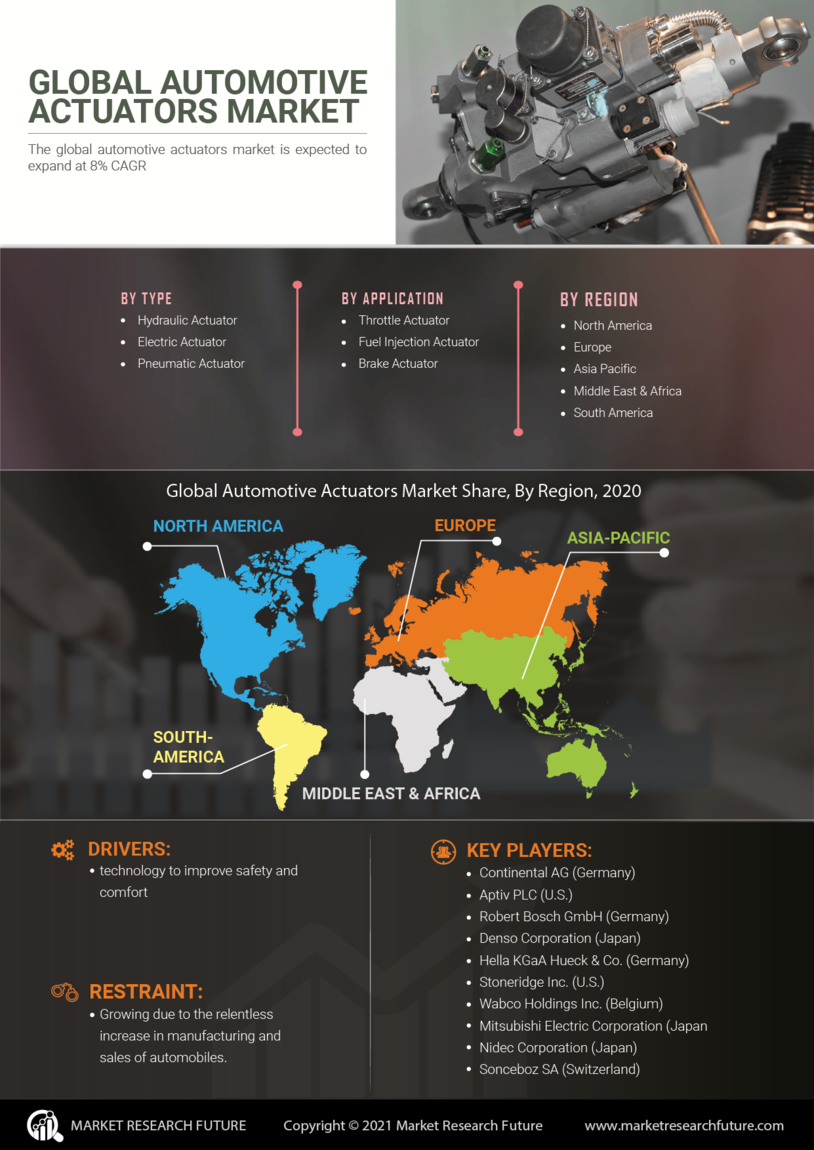 An actuator is a device that takes in the energy supplied to it in the form of electrical, mechanical or kinetic energy and converts this energy into force or motion. The output force created is proportional to the input energy provided to this device. The actuator receives a signal which initiates the conversion of electrical energy into a proportionate mechanical force by the actuator. The most common type of actuator that is used in the industrial sector is the airtight cylinder that uses the stored energy of the compressed air, which helps in moving the piston as soon as the air is released or the pressure on the air reduces, reducing the compression ratio. Automotive actuators are responsible for converting the electrical signals, which are provided from the central control unit into a tangible action. Automotive actuators help in regulating engine idle speed, engine flywheel rotations, engine torque etc, which help increase the engine efficiency and the vehicle performance.

The global automotive actuators market is driven by several factors.  In addition to the engine cooling system being operated using the radiator fan technological advancements in the automotive field have led to advanced features such as automatic engine rpm control.. These features can function optimally if the actuators are installed in an automobile. Secondly, actuators provide control and precision over vehicle parameters such as the speed, rpm, flywheel rotation, and engine overheating. Thirdly, actuators help in the incorporation of electronics and act as a link between the automobile mechanical and electrical components. 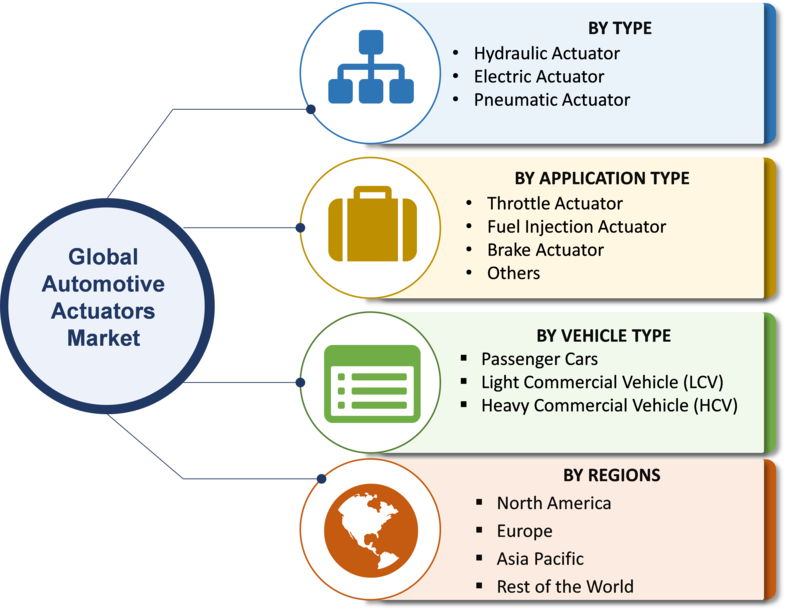 On the basis of the type, the electrical actuator, which helps in the conversion of electrical energy into a proportionate mechanical torque is the most widely used. This actuator is used to generally operate a multi-turn valve. Additionally, a mechanical brake is installed above the motor, which enables the actuator, to keep a check on the opening of the valve, and avoid the valve from getting opened completely when not required. In the absence of this brake, the valve will be opened and closed back to its original position continuously. In such a case, the motor and the actuator will undergo abrasion thus being unfit for operation. The electric actuator has the simplest of operations and the most widely used in the automotive sector. The hydraulic actuator consists of a fluid motor or a cylinder filled with fluid, which is used for executing the mechanical operation. It is almost impossible to compress a liquid, and thus, the automotive hydraulic actuator is used for exerting large forces for a sustained time duration. However, the hydraulic  actuators cannot be used when short durations of accelerated motion  are  required. The pneumatic actuators are used for the conversion of energy obtained from compressed air or vacuum into either a rotary or linear motion. Pneumatic energy powered actuators are generally required in situations wherein the engine controls are to be fired almost instantaneously. In such situations, the system needs to respond quickly in terms of starting and stopping the engine, wherein the powering air or gas need not be stored near the system and can be fed through a system of pipes and a cylinder. Thus, pneumatic actuators can be used in the production of force from a relatively small pressure change.

Of all the application types, the throttle actuator involves the conversion of the mechanical force applied on the accelerator pedal, resulting into  proportionate throttle control, which involves appropriate opening of the throttle valve, in the engine combustion chamber. The fuel injection actuator involves the opening of the fuel injection port located in the engine, according to the set idle timing of the engine, which helps to inject the fuel into the engine combustion chamber. The working of this actuator is thus related to the throttle control valve and can be adjusted through the electronic control unit of the automobile. The brake actuator involves conversion of the mechanical force exerted on the brake pedal and conversion of the same into proportionate working of the brake system, which involves friction between either the drums of the drum brake or the brake pads and the disc within the disc brake mechanism.

On the basis of region, the market is segmented into North America, Asia Pacific, Europe, and Rest of the World. The Asia Pacific market is expected to drive the growth of this market. Countries such as India and China are expected to be the future global automotive hubs. The large population in this region leads to an increase in annual sales of automobiles. The use of the automotive actuators can ensure the availability of affordable, small sized cars, which provide reduced fuel consumption and increased vehicle mileage.

The report for Global Automotive Actuators Market of Market Research Future comprises  extensive primary research along with the detailed analysis of qualitative and quantitative aspects by various industry experts, key opinion leaders to gain the deeper insight of the market and industry performance. The report gives the clear picture of current market scenario which includes historical and projected market size in terms of value and volume, technological advancement, macro economical and governing factors in the market. The report provides details information and strategies of the top key players in the industry. The report also gives a broad study of the different market segments and regions.

What stimuli are creating a promising backdrop in the automotive actuators market?

The presence of a huge end-user base is expected to promote the overall market growth.

Who are the companies opposing each other in the global automotive actuators market?

What CAGR is likely to be generated in the automotive actuators market?

An 8% CAGR is projected to guide the market’s progress.

What is the income grossing potential for the automotive actuators market?

The market is estimated to be stimulated by a profitable income level in the forecast period.

What regions are taking charge of the automotive actuators market?

The presence of big manufacturers in the APAC region is predicted to push the development of the market.