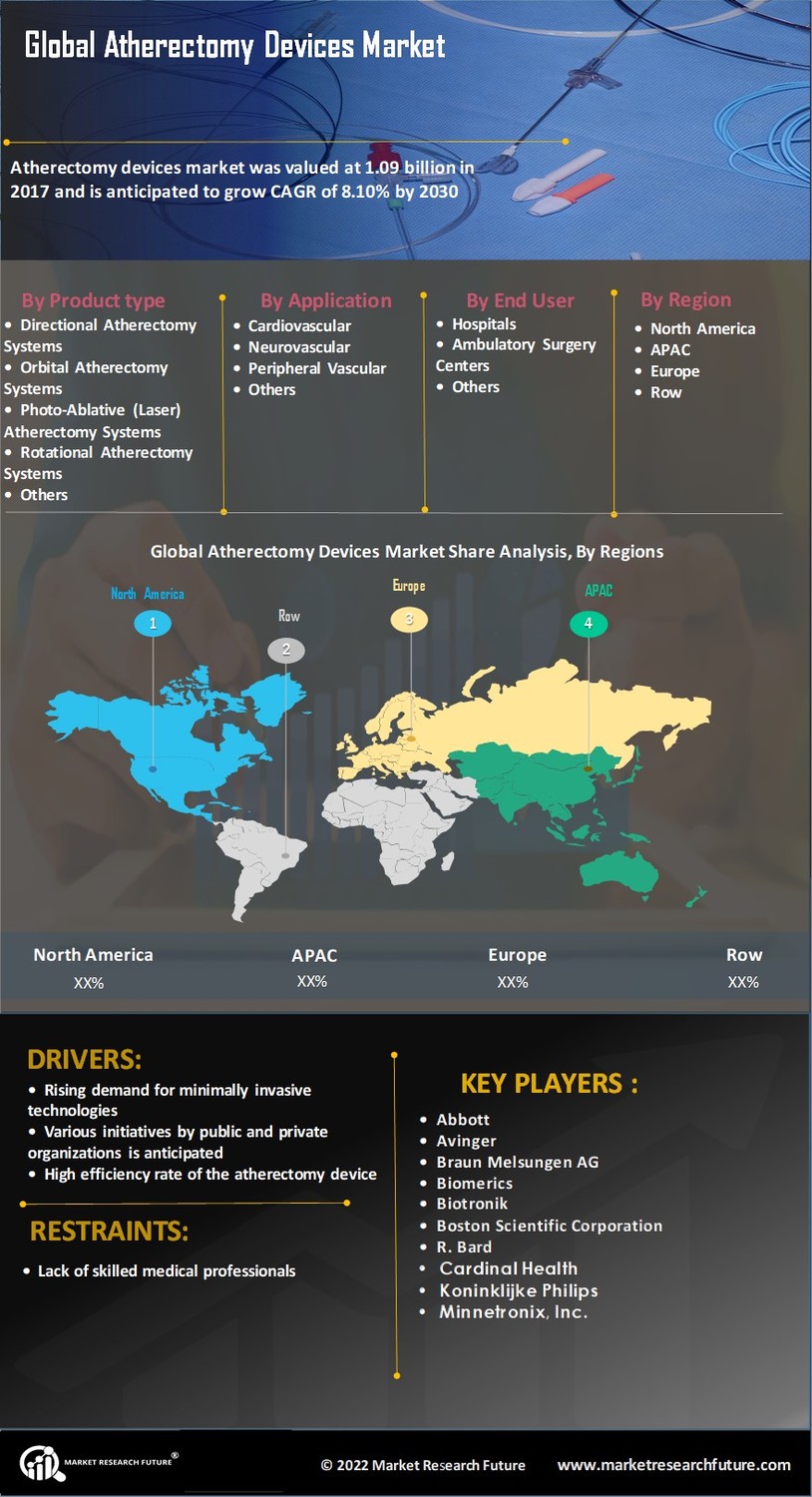 Atherectomy Devices Market is expected grow USD 681.43 Million at a CAGR 11.9% during the forecast period.

Atherectomy devices refer to various minimally invasive instruments used for peripheral vascular intervention procedures. They are designed to re-establish blood flow in the arteries by drilling, grinding, shaping, sanding, and to vaporize plaque, calcifying lesions and excessive cellular material. Some commonly used atherectomy devices include direction, orbital, photo-ablative, rotational, and support. The devices consist of a rotating blade inside a tubular catheter attached to a battery-operated motor that spins the cutter and removes the plaque or calcified lesion. As a result, atherectomy devices find extensive applications in hospitals, surgical centers and ambulatory care centers.

The increasing prevalence of peripheral artery disease, atherosclerosis, diabetes and obesity and the rising geriatric population across the globe represent the key factors driving the market's growth. Furthermore, the growing preference for atherectomy surgical procedures among patients and healthcare providers is creating a positive outlook for the market. These devices reduce the risks of infections, cause minimal pain and trauma during the surgery and facilitate faster recovery of the patient. Additionally, various product innovations, such as the development of drug-coated balloons, are acting as other growth-inducing factors. The drug-coated balloons are used in place of permanent implants with directional atherectomy and anti-restenosis therapy to deliver antiproliferative drugs and treat lesions with severe calcifications.

The atherectomy devices market is segmented on the basis of product type, application, and end user.

Based on application, the atherectomy devices market is segmented into cardiovascular, neurovascular, peripheral vascular, and others.

On the basis of end user, the market is segmented into hospitals, ambulatory surgery centers, and others.

It is projected that the Americas dominated the atherectomy devices market owing to the growth of the market in the North American region. This is largely attributed to the factors such as increase in research funding, and growing awareness about the high-end atherectomy devices among medical professionals. Europe is expected to hold the second largest share in the market owing to growing healthcare infrastructure. Additionally, various initiatives by public and private organizations is anticipated to boost the growth of the market. Asia-Pacific was projected to be the fastest growing region for the market. This owes to the technological advancements resulting in the development of cost-effective atherectomy devices leading to high acceptance rate for the devices in the Asia-Pacific region. The Middle East and Africa holds the least share in the atherectomy devices market due to the presence of economically diverse countries, and less initiatives taken by the government.


Market of Atherectomy Devices, by Application


Market of Atherectomy Devices, by Region

The shortage of healthcare professionals is more acute in rural regions, where the state owns most healthcare centers. Government schemes are funding heavily to improve health status in the rural areas.

In August 2021, Medtronic applied to the United States Food and Drug Administration to approve TurboHawk plus Directional Atherectomy System, an updated version of its older and largely phased out atherectomy device. This device will facilitate increased atherectomy procedures during Peripheral arterial disease interventions.Intended Audience

At what CAGR is the Atherectomy Devices Market projected to grow during the forecast period?

Which region is expected to spearhead the Atherectomy Devices Market?

Americas are expected to spearhead the Atherectomy Devices Market.

What are the key factors driving the Atherectomy Devices Market?

Which factors may act as deterrents in the Atherectomy Devices Market growth?

Who are the key competitors in the Atherectomy Devices Market?