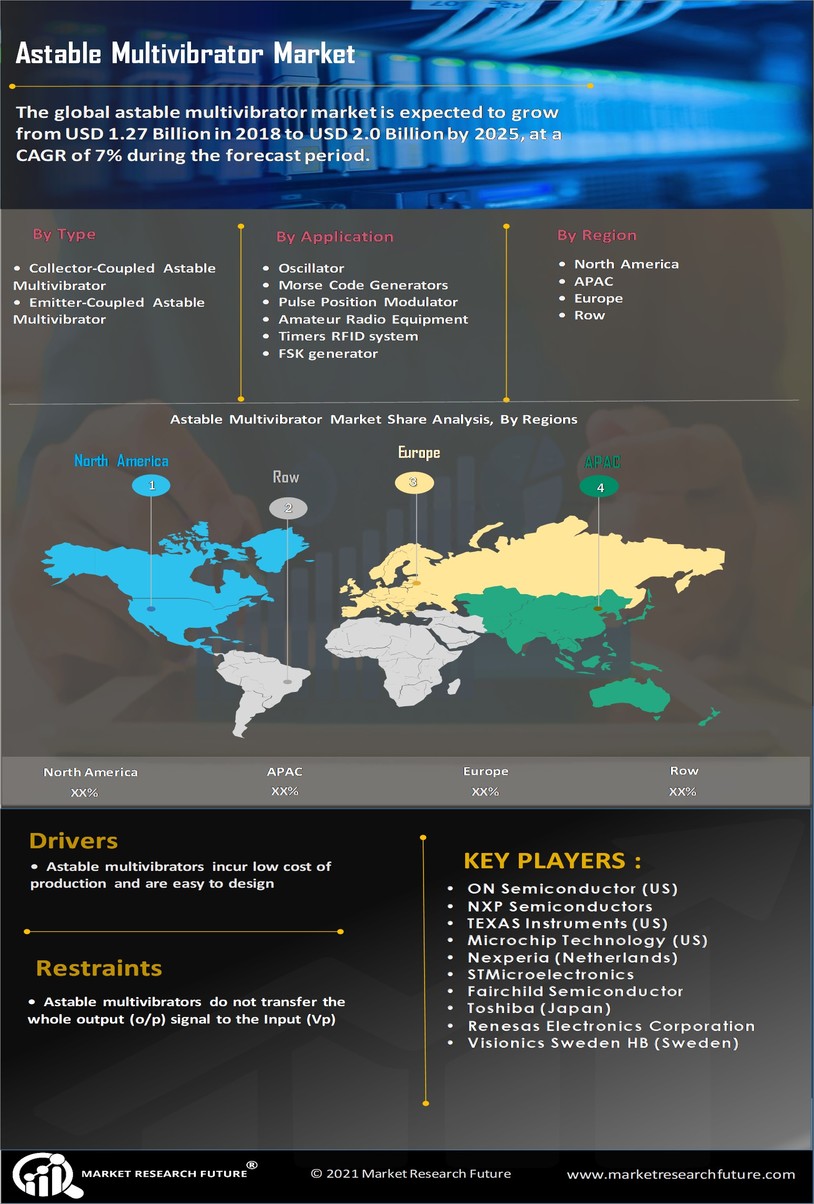 The global astable multivibrator market is expected to grow from USD 1.27 Billion in 2018 to USD 2.0 Billion by 2025, at a CAGR of 7% during the forecast period.

The global astable multivibrator market is expected to grow from USD 1.27 Billion in 2018 to USD 2.0 Billion by 2025, at a CAGR of 7% during the forecast period. As waveform generators, astable multivibrators are used largely in communication systems. Oscillators, timers, and flip-flops are examples of simple two-state systems implemented with these components. It is most typically employed in relaxation oscillators since it generates a steady square wave output waveform; it's also popular because of its simplicity, reliability, and ease of manufacture. Astable Multivibrator Industry has an automatic built-in triggering system that alternates between the two unstable states of SET and RESET continually. Two amplifying stages are coupled in a positive feedback loop utilizing two resistive-capacitive coupling networks in these devices. Junction field-effect transistors, bipolar junction transistors, vacuum tubes, operational amplifiers, and other types of amplifiers may be used for amplification. They are mostly employed in a wide range of systems that require a timed interval or a square wave. The output is a continuous square/rectangular wave whose properties are determined by the external resistors and capacitors' values. These multivibrators are constantly shifting from one stable state to the next. This enables them to power themselves and complete work at a steady rate, regardless of external forces or actions.

Because of the presence of significant key players in this area, North America has the biggest market share. North America is also known for being one of the first to accept new technologies. This is primarily owing to the region's early embrace of technology. Due to the expanding number of semiconductor and electronics companies, Asia-Pacific is predicted to be the fastest-growing area. Because of the trend toward modernization and urbanization in developing Asian countries such as India, China, Japan, and Singapore, the market in the Asia Pacific is likely to grow at the fastest rate over the forecast period. During the projected period, the European astable multivibrator market is expected to rise significantly. During the predicted period, the Middle East and Africa area is also expected to rise significantly. The market in the Middle East and Africa, as well as South America, is expected to rise at a moderate pace.

This market has a smaller number of companies. As a result, rivalry among current businesses is moderate. They compete based on the amount of electricity used and the number of components employed. To stay competitive in the industry, these organizations are working on improving their offerings. The major key players in the market are as follows:

Depending on the demands of the organization, facility management is employed in a range of industries, including retail, education, and healthcare, among others. Detailed research of geographical regions allows market players in the global Astable Multivibrator Market to identify profitable segments. The study provides a thorough evaluation of the market. It accomplishes this by giving detailed qualitative insights, historical data, and accurate market size estimates. The figures in the report are based on well-known research assumptions and methodologies. As a result, the research study serves as a clearinghouse for market analysis and data from all angles. The study also examines the maker's competitive environment. The report was prepared after a thorough investigation and assessment of every aspect of the market using data analysis to achieve exceptional market growth during the current forecast period, which will end in 2025. The key players in the Astable Multivibrator Market have also been thoroughly discussed.

What is the predicted market size of the global astable multivibrator?

The global astable multivibrator market witnessed revenue generation for USD 1.27billion in 2018 and is poised to register USD 2 billion at a CAGR of 7% over the review period (2020-2027).

What are the recent trends of global astable multivibrator market?

The increasing demand for astable multivibrator from in communication systems is creating opportunities for market players.

Which region has the largest market share in the global astable multivibrator industry?

The North America region holds the largest share of the market across the globe, followed by Europe and the Asia Pacific region. The U.S. and Canada are contributing substantially towards the North America market share.

What is the segmentation of global astable multivibrator industry?

The global astable multivibrator market is analyzed on the basis of type and application, wherein the numerous applications of the product is expected to contribute substantially towards the market growth.

Who are the most important market players in global astable multivibrator industry?

Some of the market players ON Semiconductor (US), NXP Semiconductors (Netherlands), TEXAS Instruments (US), Microchip Technology (US), among others are likely to drive the market growth.

Astable Multivibrator Market is Estimated to Grow at a Significant Rate During the Forecast Perio...