PEEK is extensively used in the mobile phones and other electronic devices manufacturing due to high mechanical and chemical properties. For instance, products of Victrex plc under brand Keta Spire and Ava Spire KEEP are used widely in electronics and other industrial applications.  Growing demand for electronic devices with advancement in technology and miniaturization is driving the market growth across the globe. With the introduction of various electronic devices namely smartwatches, cooking appliances, and other consumer electronics coupled with rising per capita income are driving the product demand. Additionally, various initiatives taken by the government of India such as Smart City and Startup India are propelling the market growth. It is increasingly used in automotive, aerospace and other industrial applications due to its lightweight. The demand for lightweight automotive components to curb vehicle weight and reduce carbon emissions is driving the demand for high-performance polymers in the developed regions of North America and Europe. Increasing usage of medical implants is replacing titanium for manufacturing spinal fusion devices due to better biological integration. Recently, Victrex plc introduced a new product under the brand name PEEK-OPTIMA HA for enhanced next-generation spine product. Also, another key player Solvay S.A. introduced new lubricated grades of Zeniva PEEK namely ZA-500 L & ZA-600 L. It is used in neurosurgical and orthopedic applications due to its biocompatibility. The shift of production capacities of various industries such as electronics and automotive from developed economies to developing economies is also driving the demand. 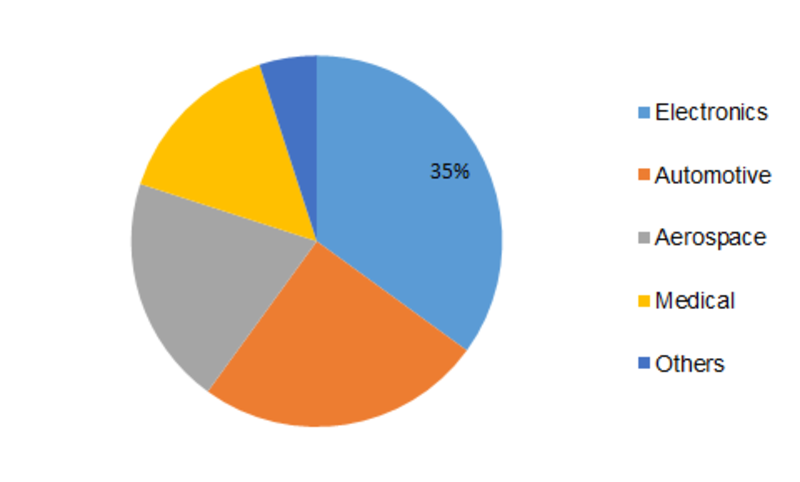 North America accounted for the largest share of the aromatic ketone polymers market in 2016. Increasing demand from the electronics industry due to technological advancements and automation coupled with rising per capita income is driving the market growth. Usage of electronic devices in smart vehicles is increasing at a rapid pace, thus providing lucrative opportunities to the key industry participants. Rising geriatric population and spinal disorders in the U.S. are expected to boost the product demand in North America.

The European market is also expected to witness a significant growth over the forecast period due to the presence of a large number of automobile manufacturers. According to European Automobile Manufacturers Association, 302 vehicle assembly and production plants are operating in this region. Additionally, strict emission norms laid down by governmental and environmental agencies in the region is slated to bolster demand for aromatic ketone polymers over the forecast period.

The Asia Pacific is the fastest growing market owing to rapid industrialization in the developing economies such as India, China, and Thailand. Rising demand from the automotive industry due to increased spending of the middle-income group on vehicles is driving the market growth.

The global aromatic ketone polymers market has been segmented into type, applications, and region.

Based on the application, the market is divided into electronics, automotive, aerospace, medical, and others.

What are the major product types in the aromatic ketone polymer market?

Major product types in the market include PEEK, PEKK, and PEK.

What are the major end use industries?

Growing demand from the electronics industry is the major driver for the aromatic ketone polymer market.

North America holds the largest share in the global market.

Leading players in the market include DSM, Solvay, and Victrex, among others.

Rising demand for high technological and premium quality products is set to propel the growth of ...