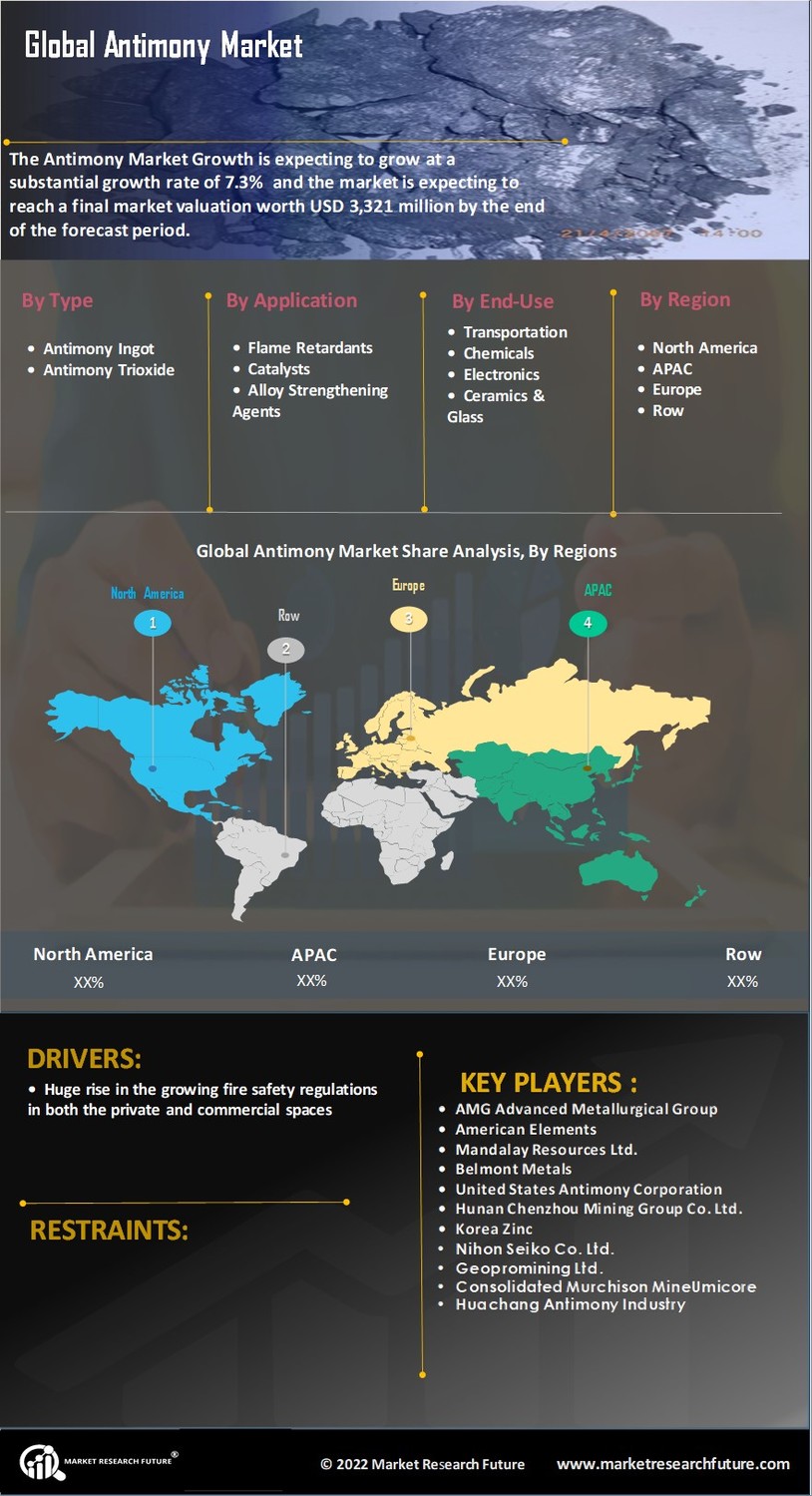 The Antimony Market Growth is expecting to grow at a substantial growth rate of 7.46% during the forecast 2021-2030. During this period, the market is expecting to reach a final market valuation worth USD 3,432 million by the end of the forecast 2021-2030. Antimony can be recognized as a chemical element that is found in both metallic forms and non-metallic ones. Comparatively, the metallic form belongs to a brittle nature and is usually, available in a bright silver color. But, the non-metallic one is the one that is usually present in grey color and powders form.

Antimony can be extracted from ores like stibnite and valentinite. They are generally available as a part of nature. Antimony is present independently as well, and hence, can be used at a wider scale. Companies are using them on an elaborated scale and this is one of the major reasons due to which their uses are being recognized globally.

Since the pandemic has taken over the normal trends and way of living of the common man, the market players have been struggling to keep up with the changes and introduce new and changed tastes and preferences. One of the major issues which the markets have faced since the coronavirus outbreak is that there is the unavailability of skilled labor due to the imposed lockdown of the temporary and permanent kind alongside the reduced availability of raw materials that are ultimately leading to a major disruption in the supply chain mechanism. Also, the decline in the employment opportunities people are experiencing struggles to meet their daily needs as well that have been posing major issues for growth for the Antimony Market operations during the forecast period.

The rising government support and the supportive public sector initiatives are likely to help the market cover the losses and hence, improvise on the working and offerings during the forecast period. Also, the prominent market players that are functional in major global regions are increasing their investment in the research and development initiatives that will help in developing vibrant products that will enhance the Antimony Market Size in the period. Also, a satisfied customer means a better return on investments in the long run.

One of the most important factors that are driving the Antimony Market Growth during the forecast period is that there is a huge rise in the growing fire safety regulations in both the private and commercial spaces that are pushing for a greater need for antimony. Owing to its role in maintaining fire safety, antimony is used in other places like schools, and offices, as well. Also, the alternate uses of antimony that is its role as an additive in fiber-glass composites for adhesion purposes are helping in the global growth of the market during the period. The adhesive property of antimony is quite high and hence, this will drive the market towards growth during the period.

Owing to short circuit and wiring concerns at various places, fire safety and availability of appropriate equipment are a must. This is one of the main reasons for the rising demand for the Antimony Market. Also, antimony acts as a stable element when it is suspended in dry air. This is an interesting fact that gives rise to the exploration degree that gives rise to the discovery of antimony reserves. All these factors are likely to present great opportunities to the market operations for expansions and global dominance.

Recognizing the risk of maintaining the environmental health that rises after using antimony, there is a rise in the investment quantum to decrease the ill effects of using antimony on the environment, and also, major steps are being taken so that public health is not at risk. Technological advancements are helping antimony to be used in lead-acid batteries as well, that help in reusing and hence, present the Antimony Market with great opportunities for global expansion and domination during the forecast period. 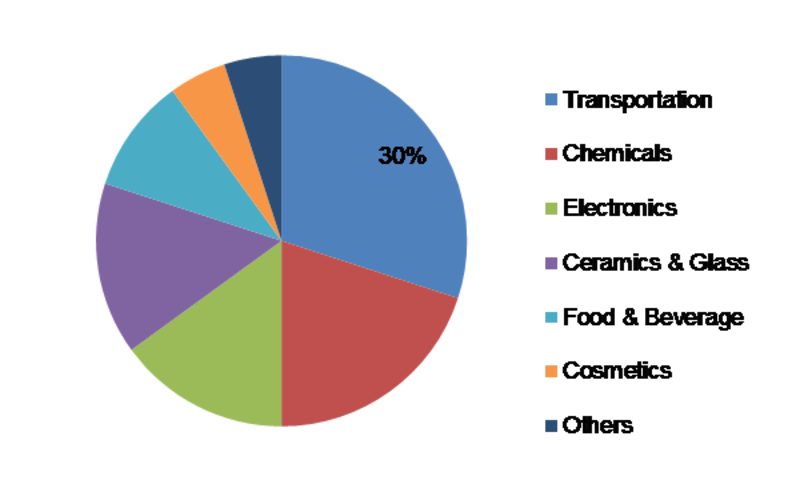 The report aims to help the market buyers and investors make better decisions of investment. Hence, the report discusses the performance and the revenue potential of the Antimony Market Segments that are catering to the demands put forward by the target audience in various global locations. The market has been segmented based on the following:

Based on the Market Applications

Based on the End-Use Industries

The End-Use Industries that witness the Antimony Market operations and demand the same are the paints and coatings industry, aerospace and defense sector, military units, construction companies, automotive and automobiles, and textile, amongst others.

Based on the Market Products

The product segment of the Antimony Market includes alloys and trioxides, amongst others.

Based on the Global Regions

The Antimony Market is witnessing a propelling demand in 5 major mushrooming regions of the world. These are North America and South America, the APAC region, Europe, alongside the Middle East and Africa (MEA).

The Antimony Market value is expected to grow to the maximum in the APAC region especially in India and China during the forecast period. China is emerging as an undisputed leader in the global market. The main reason behind this undoubted dominance is that there are large reserves present in the region that are collaborating with the fact that this region is home to a large number of people who are ready to work as cheap labor. In comparison, the North American and European nations are expected to undergo a low rate of growth owing to the stringent government regulations that are developing more restraints rather than opportunities for the global market operations to propel and develop upon during the forecast period.

The Antimony Market Report helps in providing a deep analysis of the recent developments of the players and highlight the global trade regulations. Also, the market helps in having an idea about the production analysis and the market share of the segments that will impact the final market value during the forecast period. The market puts light on the technological advancements and market dynamics that will lead the operations during the forecast period.

What are the major types and end-use industries of Antimony?

antimony ingot and antimony trioxide are the two types of Antimony. Chemicals, transportation, electronics, ceramics & glass are the major end-use industries of Antimony.

What are the major driving forces behind the growth of the global Antimony market?

Increasing usages as a flame retardant in major industries such as automotive, aerospace, building & construction, and electrical & electronics.

Which region holds the largest share in the global Antimony market?

Who are the top players in the global Antimony market?

What are the key growth strategies of Antimony industry players?

Strategic initiatives such as mergers & acquisitions, collaborations, expansion, and technology/ product launch are some of the growth strategies that players operating in the global Antimony market adopt to gain a larger competitive advantage.

Antimony Market: Flame Retardants in major end-use industries across the globe is set to drive th...