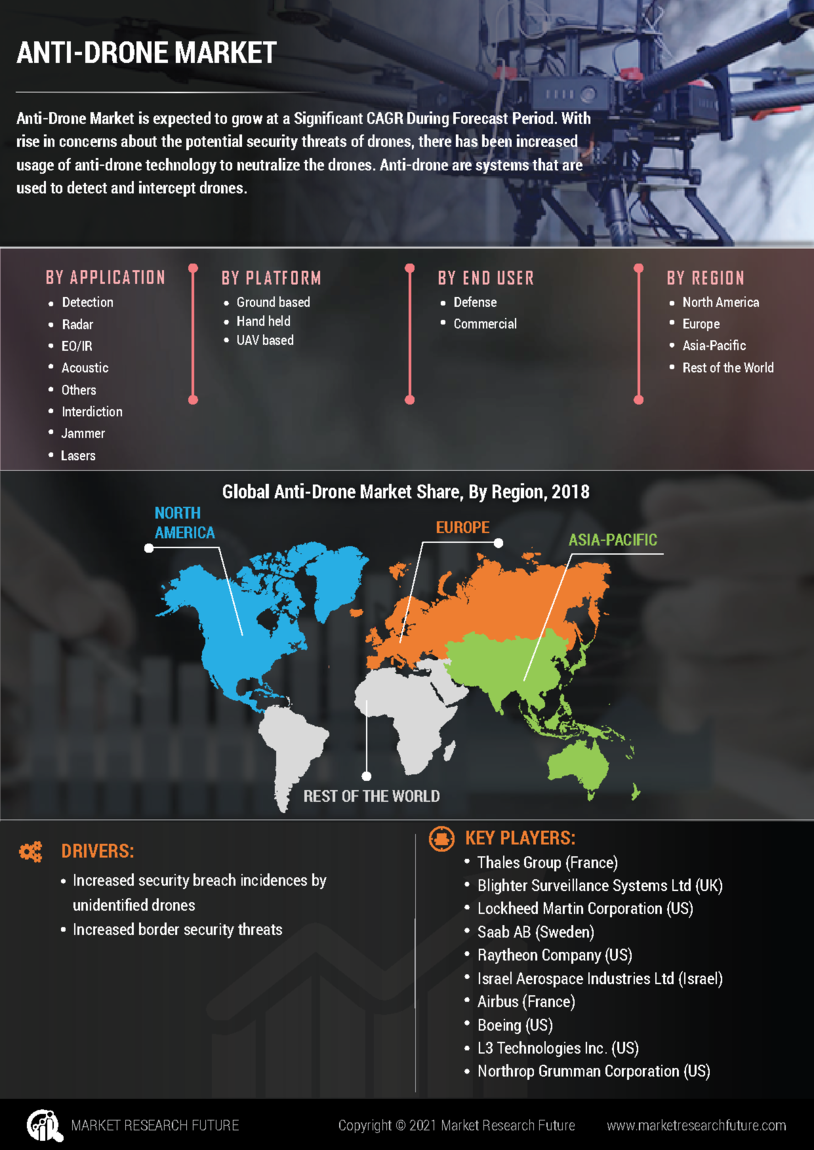 Drone technological improvements, as well as the development of small- and medium-sized anti-drones capable of identifying micro-UAVs ranging in range from 1.5 to 2 kilometres, present potential for manufacturers. The anti-drone market will be driven by rising market demand for equipment equipped with radar, RF scanners, and electro-optical infrared for payload detection. Rapid use of anti-drone technology for professional and recreational purposes, which has escalated public and government concerns about airborne attacks, is propelling the business.

However, the use of anti-drone jammers or uncontrolled UAS detection and countermeasure deployments are likely to cause electromagnetic and radio frequency (RF) interference, particularly at airports, affecting flight safety and air traffic management challenges.

The sudden outbreak and the obnoxious spread of the global COVID-19 have affected the anti-drone market. Considering the inputs that are pouring in from various industry experts belonging to different stages of the anti-drone value chain that are inclusive of OEM, suppliers, other end-users, and distributors, as well as, after consulting stages of financial releases of different companies in the anti-drone ecosystem for the first and second quarters of 2020, it has further, been estimated that the growing size of the anti-drone market might witness a decline of 1-3% in the pandemic year of 2020.

This is because of the customer personnel restrictions, followed by the delayed purchases, disruptions in the supply chain that is coupled with restrictions on cross-border trade resulting in various kinds of delays in the completion of raw materials and component consignments, particularly from the Chinese region. The anti-drone market has seen a slow degree of procurement of anti-drone systems from both the European and the Middle East regions due to the outbreak of the COVID-19. The growing demand for anti-drone systems and associated technologies is projected to grow at a consistent pace during the post-COVID-19 period, as the global governments continue to strengthen their defense capabilities for conducting the processes like tackling the uncertain geopolitical struggles and tensions such as the India-China standoff or the dispute in the South China Sea that has been laying for a large time.

The rising investments and expansion in the product portfolio are likely to help the anti-drone market size during the ongoing forecast period that will be ending in 2027.

With the increase in the number of use of drones, there has been a rise in the number of security breaches by unidentified drones at places like critical infrastructure and public places has also, increased. There has been a spur in the demand for countermeasures. The potential culprits of the anti-drone market include hobbyists, antinuclear groups, business competitors, and some terrorist organizations. Currently, there are drones that have become popular and readily available owing to their affordability. Commercial organizations make use of drones for purposes like express parcel delivery, while the military groups make use of them for attacking the suspected terrorists. In the past few years, there has been a rapid growth recorded in the use of all types of UAVs. In the US region, reports regarding unmanned aircraft sightings from pilots, citizens, and law enforcement have increased consistently since 2018.

The Anti-drone market technology is relatively new in the propelling market, and hence, the technologies are used to manufacture the counter-UAV systems that are undergoing rigorous research and development techniques. Several market players of the market are introducing these new market technologies are planning to patent them. Also, the cost that has been incurred for the research and development is quite high owing to the rising factors like the use of lasers and other costly technologies. Hence, the medium and small-sized players cannot afford the development and deployment of anti-drone systems due to the rising need for high initial investment.

The Anti-drone market by technology has systems that are available today and can identify the micro-UAVs ranging from 1.5 to 2 kilometers, while for mini-UAVs, the range lies from 8 to 10 kilometers. For instance, in 2015, there were three British companies—Blighters Surveillance Systems, Chess Dynamics, and Enterprise Control Systems— that launched the anti-UAV defense system that is known for their ability to detect, identify, and further, disrupt the micro-UAVs up to a range of 2 kilometers and mini-UAVs up to a range of 8 kilometers. Drones are emerging and becoming smaller in size owing to the advancing developments and drone technologies. Therefore, there has been a constant use of small drones that has increased dramatically over the years, and in the upcoming time, as a part of the pandemic year that will be ending in 2028. Hence, there are several companies that are engaged in manufacturing compact counter-drone systems that will improve the anti-drone market size.

The anti-drone market report discusses the projections of the growth rate and market valuation during the forecast period ending in 2027 by the leaders and experts and this growth prediction is based on the market dynamics like drivers, opportunities, and operational restraints available in this period.

The market growth is further, helpful in understanding the revenue potential that is held by the market segments that are functional in various global regions as a part of the global market operations. This study of the global market will help the investors in making better investment decisions and further, have a good idea about the possibility of the market reaching the predicted market valuation during the period.

The market report is good for reference and thus, have an idea about the competitive degree prevailing in the market. The report also helps to understand the recent developments that have been undertaken by the global market players during the forecast period that ends in 2027.

The anti-drone industry has been on its way to expansion at an excellent scale during the ongoing forecast period that will be ending in 2027. The global market has been segmented based on the following factors:

Based on the market Application

The global market has been segmented based on applications and includes

Based on the Platform Type

The platform type segment of the anti-drone market is inclusive of the following:


Based on the Market Vertical

The anti-drone market has been segmented on the verticals and includes:

The anti-drone ammunition market has been segmented based on the regions. The market scenario suggests that the North American market is likely to establish domination in the global market premises. Factors such as the contribution to the growth of this market that is inclusive of increasing incidences of security breaches by some of the unidentified drones and further, the rising number of terrorist attacks in American countries, especially in the US region, as a part of the North American market.

The anti-drone device is undergoing a major degree of demand owing to the developments and portfolios owing to the steps like mergers and acquisitions that have been undertaken by the following market players:

February 2027: Drones pose a significant threat to the aviation sector, causing aircraft delays, cancellations, stranded passengers, and severe economic hardship for airlines worldwide. Anti-drone technology has evolved into a valuable asset for airport security. Dedrone, a specialist in anti-drone technologies, predicts the forthcoming drone landscape this year and how it will affect airports and airlines worldwide. Dedrone, a US anti-drone security startup, provides the aviation industry with technologies to detect and categorize drones as well as identify operators. In addition, the organization offers real-time alerts and identifying information to the aviation industry.

The global market report helps in analyzing the factors that will either help the market to grow or restrain the market from growing at the predicted scale during the period that ends in 2028. The market discusses the impact of the pandemic on the market operations followed by the functioning of the market in the form of drivers and restraints.

What is the expected Anti-Drone Market CAGR for the forecast period?

The Anti-Drone Market is expected to grow at a global CAGR of 25%.

Which Are The Top Key Companies In Anti-Drone Market ?

Does the market face any restraints on the way of its growth?

The market is facing the misuse of drone technology by terrorist groups and hackers is emerging as one of the major market restraints.