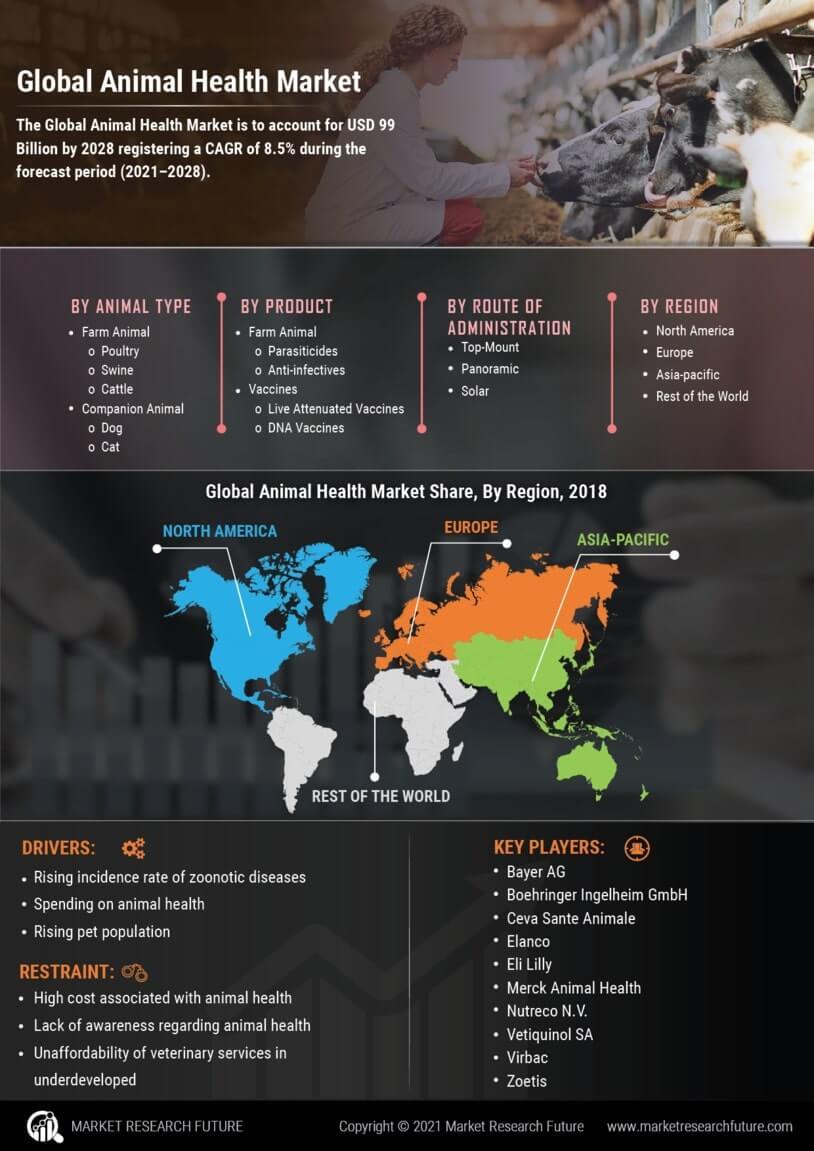 The Animal Health Market size is projected to reach USD 99 Billion by 2028 at 8.5% CAGR during the forecast period (2021–2028). Animal health care is primarily concerned with the wellness of pets and farm animals. Like a human disease, animals are capable of capturing parasites and other diseases, which require diagnosis, prevention, and control of the disease. The increasing incidence of disease in livestock and poultry has provided lucrative growth opportunities for pharmaceutical companies to work on new medications and drugs.

The vaccinations segment is holding the highest market rate in the Animal health market. Since, vaccines tend to improve the immune system of the pet animals such as dogs, cats, and horses. However, there is no proof in the industry that any vaccine in the market is capable of providing a 100% immune system to the pet. On the other hand, some challenges such as non-potency of vaccinations, poor health condition of the pet during vaccination are some of the major challenges faced in the market. Proper diagnosis is required for protecting the animals, based on their breeds, anatomy, and immune system. Hence the market requires an increase in the fund support in the R&D development.

The widespread pandemic has affected the Animal health market growth both positively and negatively. The widespread of COVID infection in several countries have propelled the governments to impose strict regulation regarding commute to other places. Hence the restrictions in the movement have limited the accessibility to veterinary health care centers. Several governments were focused on the ongoing crisis and the emergency of saving human lives, the veterinary consultations and checkups were postponed as they were not considered as an emergency.

On the other hand, the COVID infection had been spread to the animals also. Several cases were reported for COVID positive. The COVID testing kits for animals were increasingly gaining popularity during the second wave of COVID which propelled market players to take appropriate actions to help the veterinarians. Studies were conducted and samples of several pets from different households were collected and evaluated to understand the causes and symptoms of COVID in animals. Such factors have propelled the Animal health market even during the pandemic.

Increasing incidences of Zoonotic disease and increasing development of e-commerce platforms have promoted virtual shops and health care services for animals. Several non-profit organizations have come forward in recent times in educating the public about care to be given to animals. This factor has increased the overall growth of the animal health market in recent times.

The increasing popularity of online stores, easy availability, and discounted products are the major reasons for the increasing demand for pet-related stuff. The key market players and emerging market players in recent times are willing to increase their investment for the R&D development in the market.

Increasing government initiatives in countries such as Europe, US is presenting lucrative opportunities for the overall growth of the Animal health market. The AWBI stands for Animal Welfare Board of India, organizes and administrates various sectors of animal welfare such as fisheries, animal husbandry, dairying, and other sectors. The primary aim of the AWBI is to provide proper financial support for the animal farms and offer proper maintenance of sheltered animals and rescued cattle. Such factors are stimulating the overall growth of the market in developing countries also.

Rapid urbanization and rising disposable income in several countries have propelled a large population to adopt animals. In recent times, the overall costs spent to pamper pets have significantly increased. The necessity of emotional support and growing concern towards pets and animals has increased due to social media and other factors.

The increasing trend of veganism and shifts towards vegetarianism are considered as major restraining factors for the Animal health market growth. Increasing health concerns related to improper diet and high-fat diet have propelled a huge population to adopt a vegetarian diet across the globe. Such factors are considered to be the primary growth restricting factor for the market.

The storage and handling of vaccinations for the animals require standards and difficult measures; the inappropriate transportation of the vaccines might make them ineffective and might lead to vaccination failure. The temperature control throughout the transportation up until the end-user is essential. The non-potency of the vaccination can’t be identified by the buyers. Such factors are impacting the growth of the Animal health market adversely.

Lack of data available concerning the diseases of livestock or pet animals and lack of researches concerning the diseases that animals could acquire is considered as the major challenge in the Animal health market. On the other hand, lack of funding in the market when compared to human diseases has also limited the overall growth of the animal health market.

While considering the health care service concerning animals, Vaccines are holding the highest market share in the Animal health market. The parasiticides which come in two forms, which are ectoparasiticides, and endoparasiticides are effective in treating the parasites outside and inside the animal bodies. Dimpylate and trichlorfon were the active ingredients widely used in the industry. The rising developments in organochlorines, organophosphates, carbamates, amidines, synthetic pyrethroids are stimulating the overall growth of the market. These active ingredients are efficient in controlling the parasites and other veterinary parasites.

The increasing pet ownership in several countries is also presenting lucrative opportunities for the Animal health market growth. The increasing consumption of red meat and dairy products across the globe is also stimulating the overall growth of the market.

The food-producing animals are expected to hold the largest market share in the forecast period, owing to the increasing consumption of dairy products and red meats. India is considered the leading producer and consumer of milk products, and meat. Over 3.2 million metric tons of meat were consumed in the year 2020. Such factors are increasing the overall Animal health market growth globally. On the other hand, countries such as America, Europe are concerned about consuming fresh meat, the advent of temperature tags and other novel technologies ensure that their meat produce is fresh and healthy.

The health concerns and awareness are increasing in the developed countries, which propel them to acquire necessary information about the food they consume. On the other hand, the increasing demand for pet ownership in the countries such as China, India, and other Asia-pacific countries has stimulated the Animal health market growth. Increasing disposable incomes and favorable economic conditions in countries like China, and other developed countries, have prepared a huge population in spending on their pets and other health care services related to their pets. A recent study by the US meat Export federation has stated that China is leading in pork consumption, the study shows that the consumption had grown from 29 kilograms per person in the year 2012 to 35 kilograms in the year 2019.

Based on Feed Additives:


Based on Growth Promoter:


Based on Animal Type:

Europe has significantly influenced other non-European countries by their high standards in protecting farm animals, fisheries, domestic animals, and cattle. Their standards were primarily regarding slaughtering and transporting them to the other areas. On the other hand, they have generic standards for protecting wildlife and laboratory animals as well. In the year 2018, the country has adopted a novel regulation called MEPs which is to obtain several medications available in the market to upgrade the overall health of the cattle and to increase their production.

A recent survey has stated that the European veterinary segment is expected to witness steady growth in the forecast period and project a CAGR of 3.2% by the year 2026. The demand for the meat products in the region propels testing them for food-borne diseases; this factor is considered as a primary growth-stimulating factor.

On the other hand, the Canadian Government has also imposed significant standards in protecting the health of Animals. The government initiatives include educational sessions, which educate the cattle owners about the challenges in the agricultural industry, scientific investigations to clear the potential gaps in animal welfare, an inspection of dairy farms, and checking if they are complying with the regulations concerning the cleanliness, water facility, suitable animal housing and other factors. Such initiatives have increased the overall growth of the animal health market in the region.

The advent of technologies in the Animal health market has propelled the overall growth of the industry, for instance, an Italian company has recently introduced a system that utilizes IoT solutions to monitor the environmental parameters of animal houses. Such factors have delivered information to the caretaker before the animals get sick. The real-time data produced by the system can be accessed by any connected device.

A prominent market player in the US has developed a system that can create a microclimate environment for the piglets. The environment keeps the piglet, warm and healthy and has provided a vivid insight into areas such as prevention of disease outbreaks and in the overall maintenance of pig farms.

What will be the worth of the animal health market in 2027?

What CAGR has been predicted for the animal health market during the forecast period of 2027?

The animal health market has a chance to record 7.64% CAGR during the forecast period of 2027.

The animal health market is getting backed by rising pet population, spending on animal health, the rising incidence rate of zoonotic diseases, and growing pet insurance.

Which animal type is leading the animal health market?

The animal health market is getting led by the farm animal segment.

By product, which segment is expected to lead the global animal health market?

The vaccine segment is slated to lead the global animal health market by product type.