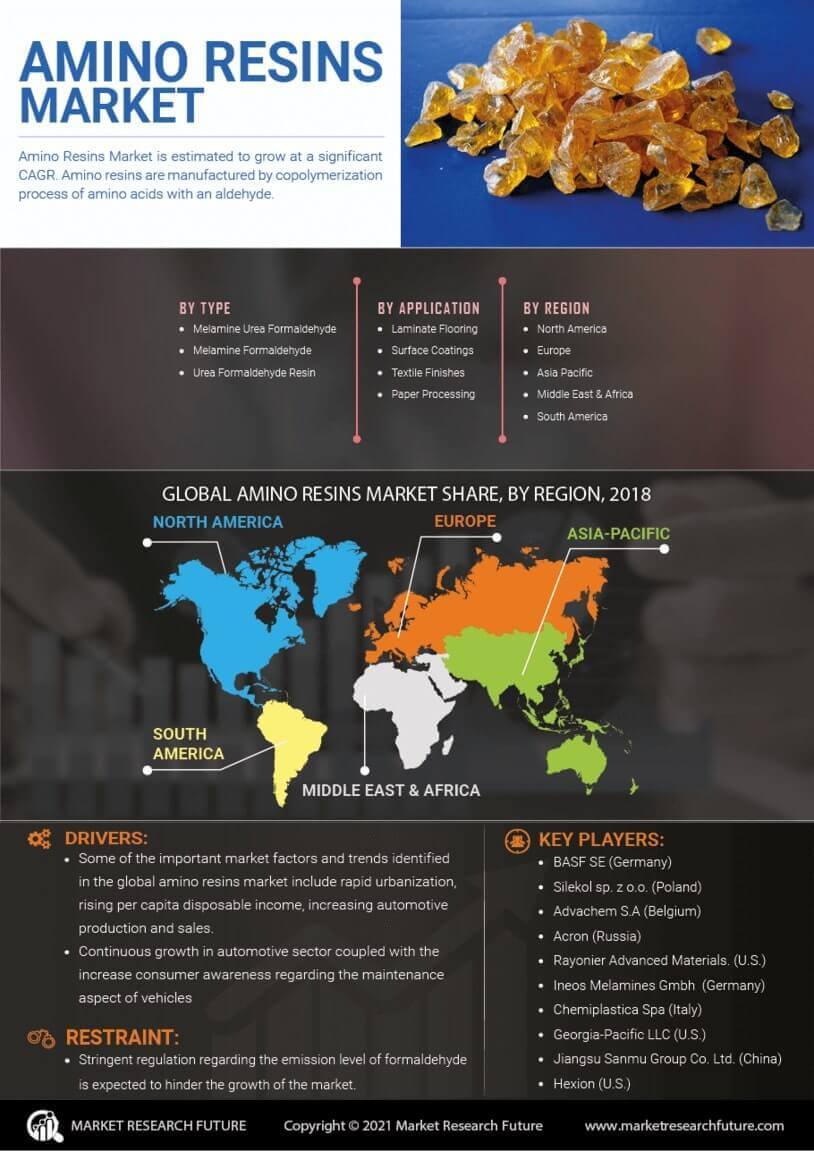 Amino resins are manufactured by copolymerization process of amino acids with an aldehyde. These are a class of thermosetting resins which possess numerous properties such as resistance, hardness, and superior tensile strength. These are generally used as molding materials. They provide various functions to base materials such as solvent resistance and coating hardness when combined with acrylic resins and polyester resins. They find extensive application scope such as textile finishers, surface coatings, laminate flooring, and paper processing in end use industries such as furniture, building & construction, automotive, and others.

As per our analysis, some of the important market factors and trends identified in the global amino resins market include rapid urbanization, rising per capita disposable income, increasing automotive production and sales. Furthermore, continuous growth in automotive sector coupled with the increase consumer awareness regarding the maintenance aspect of vehicles is estimated to propel the market growth. Additionally, speedy industrialization and rising number of working population have increased the demand for personal vehicles, which in turn, have increased the production & sales of automotive vehicles. The above mentioned reason is predicted to drive the demand for amino resins over the forecast period, 2016 to 2030. Moreover, rising investment in the building & construction sector as well as continuous expansion of building & construction industry in the developing regions is expected to fuel the growth of the market. Increasing use of amino resins in furniture industry as well as rising demand for aesthetic design furniture is predicted to fuel the growth of the market. Growth of woodworking industry in developing economies is estimated to fuel the demand during the assessment period. However, stringent regulation regarding the emission level of formaldehyde is expected to hinder the growth of the market.

The global amino resins market consists of five regions– Asia Pacific, Europe, Latin America, North America, and the Middle East & Africa. Among these, Asia Pacific region is estimated to grow with the highest CAGR during the forecast period on account of expansion of automotive sector as well as growing urbanization. The demand for amino resins is predicted to surge in various countries of Asia Pacific such as China, India, Malaysia, Vietnam, South Korea, and Japan due to rising middle class population along with the continuous growth of new purchase and old vehicles. Furthermore, increasing number of vehicles on road, specifically passenger vehicles has significantly contributed to the amino resins market. Additionally, with technological advancement in recent years and relatively high adoption rate is expected to propel the growth of the market during the review period, 2016 to 2023. Some other factors attributed to the regional market growth are, low setup cost of production unit, availability of cheap raw material, land & labor, and moderately stringent regulatory framework.

Asia Pacific holds the largest market share for amino resins in 2016 followed by Europe and North America. North America is predicted to witness a steady growth in amino resins market due to recovery of industrial sector coupled with escalating investments to revitalize furniture industry. North American countries such as the U.S. and Canada are among the major contributors in the regional market growth and are predicted to see a tremendous regional market growth owing to continuous expansion of electrical & electronics sector. While in Europe, countries such as France, Italy, Germany, Russia, and U.K have emerged as prominent consumer markets due to developed numerous end use industries and rising investment on R&D and innovation.

Latin American countries such as Mexico, Brazil, Argentina, and Colombia are also predicted to witness moderate growth with the involvement of new business models and high automotive production and sales. The Middle East & Africa is expected to witness a significant growth during the review period. Robust growth in residential as well as commercial construction sector in Qatar, Kuwait, Saudi Arabia and the United Arab Emirates (UAE) is estimated to positively influence industry growth during the assessment period. 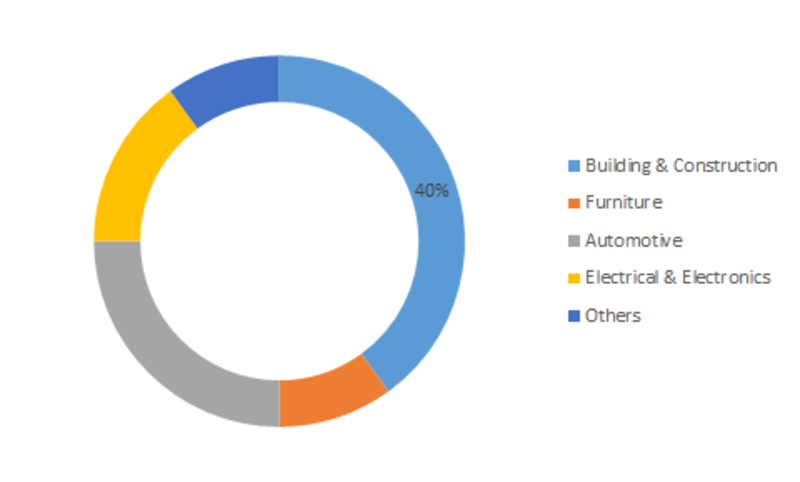 November 2021 - In addition to the large-scale project focused on enhancing the worldwide capacity of the bio-based polyamide 11 by at least 50% in the Singapore site, Arkema will also be constructing a polyamide 11 powders unit at its Changshu platform situated in China. The unit construction is expected to start by the first phase of 2023. Investments by the company will also facilitate the surging demand among end-users for innovative bio-circular materials across Asia.

Rilsan polyamide 11 powders, presently developed in France completely from sustainable castor beans, are known across the globe for their impressive properties as well as high performance when it comes to durability, toughness, processing versatility, as well as lightweight. These are utilized in extremely demanding sectors and offer advanced solutions for the rapidly expanding markets including energy-efficient transport, additive manufacturing (3D printing), and durable home appliances, in industrial, aerospace and consumer industries.

Which region is expected to dominate the amino resins market?

The Asia Pacific is expected to dominate the amino resins market.

What are the key factors driving the amino resins market growth?

Which end use segment will have the largest share in the amino resins market?

Building & construction sector will have the largest share in the amino resins market.

Who are the key players operating in the global amino resins market?