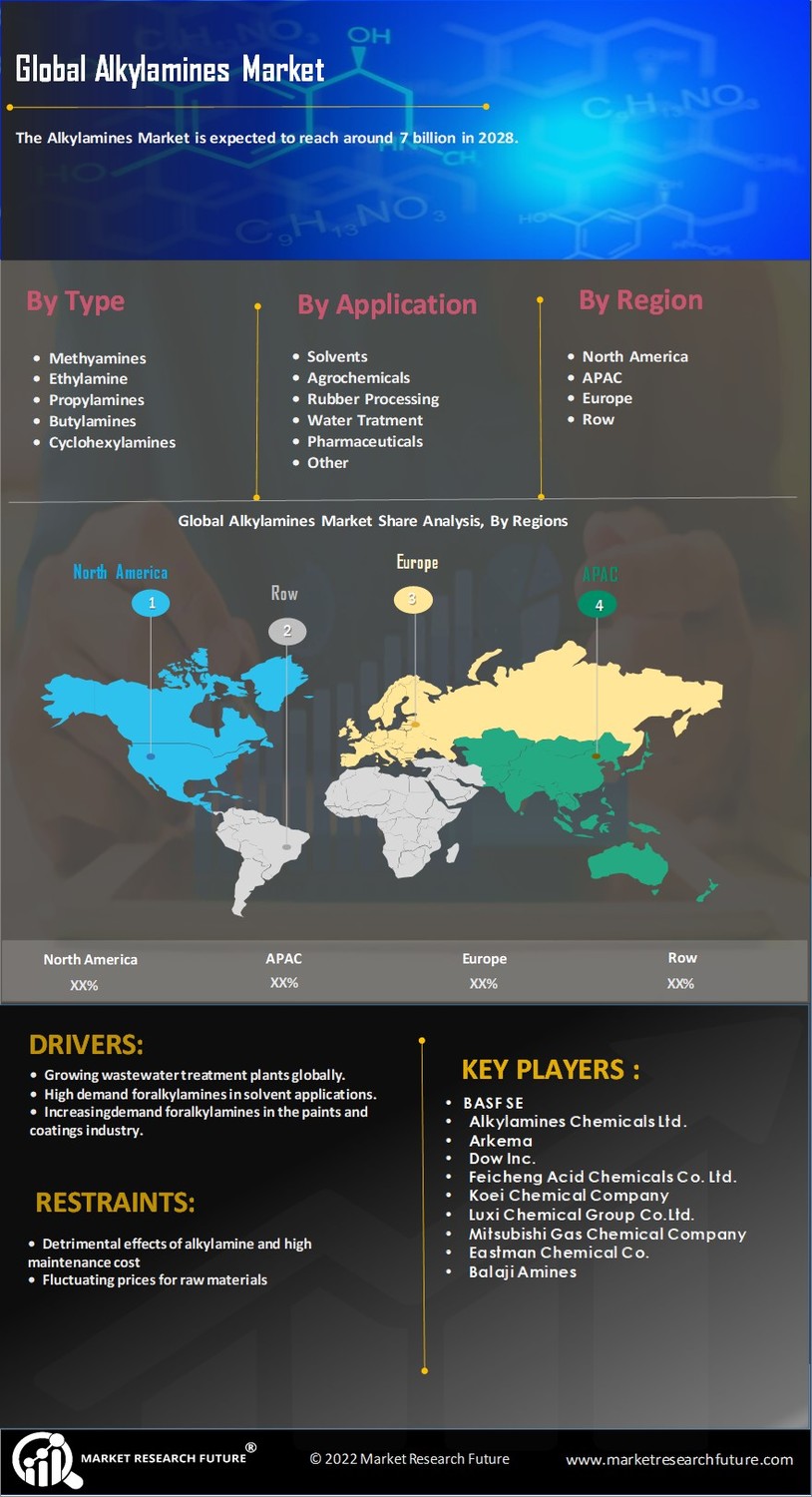 Alkylamines Marke is expected to reach USD 9,453.2 Million in 2028 and register a revenue CAGR of 5.9% over the forecast period

According to MRFR analysis, the Alkylamines Market is expected to reach around 7 billion in 2028.

Alkylamines are being increasingly used in various applications, including solvents, insecticides, feed additives, rubber processing chemicals, and water treatment chemicals, which arepropelling the market forward. The market is expanding due to the increasing usage of alkylamines in manufacturing awide range of solvents. Furthermore, the rising use of C1-C6 alkylamines as pesticides in the agrochemical sector is propellingthe market growth. Growing usage of solvents in the manufacturing of spandex, polyurethane elastomers, and polyimide films, on the other hand, are contributing to market expansion.

However, the detrimental effects of alkylamine and high maintenance costs will likelyhinder the global Alkylamines market. Nevertheless, factors such as government investments and advancement in manufacturing technologiesarelikely to create lucrative opportunities for market growth in the forecast period. Surging innovation in the pharmaceutical industry is projected to open up new growth potential for leading market players.

The outbreak of COVID-19 has had a negative impact on alkylamines production due to the disruption in the supply chain across the globe. This is because of the restrictions on travel and face-to-face meetings coupled with lockdown and curfews to limit the spread of the coronavirus. The pandemic affects operations of different industries, including agriculture, oil and gas, construction, packaging, and others. Because Alkylamines are widely employed in various industries, the decline in their operations directly impacts market growth.

Producers are planning to increase alkylamine prices for end-users to sustain themselves in the market. The majority of raw materials suppliers in this market had to shut down their operating facilities due to the outbreak of COVID-19. The shutdown of various raw material producers and alkylamines manufacturers havereporteda decline in global consumption. Considering the situation, many companies have halted their production facilities across the globe. Some other companies, which are still working, are operating at only 40-60% efficiency. However, these companies have begun operations again.

Manufacturers in this market have decreased their production capacities owing to the decline in demand from the end-use industries, reduced prices, and disruptions in the supply of raw materials. Key players in the market have witnessed a decline in revenue in the fiscal year 2020 compared to 2019. The manufacturers are taking a toll due to reduced demand for products and have announced reduced capital for their prospects. In addition to this, the imposition of various fiscal and monetary policies across the globe to limit the damage caused by COVID -19 by the governments and managements is expected to result in certain relief.

Major players in the alkylamines market are adopting strategies such as technology launches, acquisitions, and R&D activities. Some of the major key developments in the global Alkylamines market include:

What is the forecast period of Alkylamines Market research report?

The forecast period for Alkylamines Market research report is 2020-2027.

Which region will lead the global Alkylamines Market?

Who are the key players in the Alkylamines Market?

Growing Demand for Basic Chemicals Across the Globe is Expected to Boost the Demand for Alkylamin...