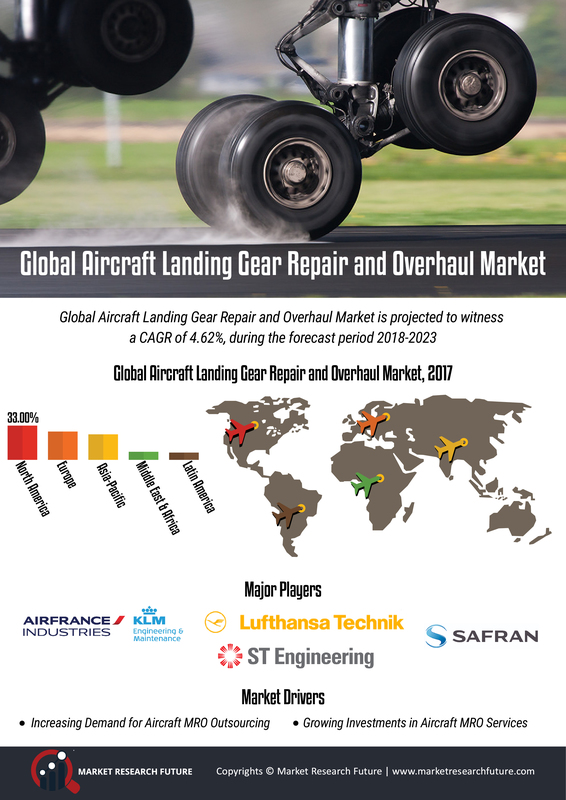 Aircraft Landing Gear Repair and Overhaul Market Scope :The bottom of an aircraft, which can support all the weight associated with the aircraft during takeoff and landing, is known as a chassis. The chassis suffers strong tensions and loads during the take-off and landing of the aircraft. This results in wear of the landing gear and therefore requires repairs and overhauls at fixed time intervals. If aircraft maintenance does not land regularly, it can affect the operation of landings and indirectly interfere with the overall performance of the aircraft. Today, technologically advanced chassis are equipped on aircraft to achieve optimal fuel efficiency.

With the continued growth of air travel in recent years, the demand for aircraft and the need for technological advances have increased at the same time. For example, in recent years, aircraft manufacturers are focusing on the development of next-generation electric power aircraft. Therefore, the growing development of next-generation aircraft would hinder the growth of the Aircraft Landing Gear Repair and Overhaul Market.

The following factors motivate or increase the global growth of the aircraft landing gear system market:The aviation sector expects great growth due to the increase in the manufacture of the latest-generation aircraft. Improvements in global economic conditions have led to an increase in global air passenger traffic. In the past few years, the number of commercial aircraft to serve the growing air traffic has suddenly increased. This increase in the number of Commercial Aircraft Landing Gear Market is expected to be the market for repairing and refurbishing the aircraft chassis.

Almost 80% of major train chassis reviews will be carried out on Boeing and Airbus jets, about 60% of them will be on Boeing models, and about 20% on Airbus jets. However, the chassis repair and overhaul market is changing as older aircraft services are replaced by newer advanced services. As a result, the main challenge for these service providers is to equip technologically advanced service systems.

There is an increase in the number of air travel on short routes between countries, such as the United States and Canada in North America. Besides, regions such as Europe, the Middle East, and Africa show remarkable growth rates due to the rapid growth of the civil aviation sector. As a result, the growth of the aircraft landing gear repair and overhaul market will grow during the forecast.

Europe is expected to grow significantly in the global aircraft chassis repair and overhaul market during the forecast. Since then, Europe has had the presence of large companies, such as Airbus, Air Safran, and Lufthansa Technik. These companies offer aircraft overhaul and repair services. The increase in the number of aircraft is expected to involve more regional companies in the provision of Aircraft Landing Gear MRO Market for aircraft chassis.

Overall market assessment for landing gear system in aircraft forecast:The report consists of several segments, as well as an analysis of trends and factors that play a large role in the market. These factors; the dynamics of the market involve the drivers, limits, opportunities, and challenges by which the impact of these factors on the market is described. Motivators and restrictions are internal factors, while opportunities and challenges are external factors of the market. The Global Repair and Review of Global Aircraft Landing Tools study provides an insight into market development in terms of revenue over the forecast.

The global market for aircraft repair and overhaul - scope of the report:This report provides a comprehensive analytical environment for the global market for repair and overhaul of landing aircraft. The market estimates given in the report are the result of in-depth secondary research, primary interviews, and analyses by internal experts. These market estimates were considered through the study of the impact of various social, political, and economic factors, along with the current market dynamics that influence the growth of the global Aircraft Landing Gear Repair and Overhaul Market of repair and overhaul of ground aircraft.


Aircraft landing gear market manufacturers market dynamics:The chapter explains the five strengths: namely, bargaining power of buyers, bargaining power of suppliers, the threat of new entrants, threat of substitutes, and degree of competition in the global repair and overhaul of lending markets. aircraft. It explains the various participants as system integrators, managers, and end-users in the market ecosystem. The report also focuses on the competitive landscape of the global market for the repair and overhaul of ground aircraft.

Global landing gear overhaul shops: A competitive landscape:The Aircraft Landing Gear Repair and Overhaul Market analysis is a section exclusively dedicated to the major players in the global landing aircraft repair and overhaul market, where our analysts give an overview of the financial statements of all major players, along with their development and product benchmark. Analysis. The company profile section also includes an overview of the business and financial information. The companies in this section can be customized as per the requirements of the client.

The global market for repair and overhaul of aircraft Research methodology:The research methodology is a combination of primary research, secondary research, and expert panel analysis. Secondary research includes sources such as press releases, annual company reports, and industry research articles. Other sources include industry magazines, trade journals, government websites, and associations, which can also be reviewed to collect accurate data on business expansion opportunities in the global aircraft repair and overhaul market.

The report on Global Repair and Review of Landcraft Aircraft deals with comprehensive primary research;This is accompanied by a detailed analysis of qualitative and quantitative aspects by several industry experts and key opinion leaders to gain in-depth information on the market and the performance of the sector. The report gives a clear picture of the current market scenario, which includes the size of the historical and forecast market, in terms of value and volume, technological advances, macroeconomic and factors dominating the market. The report gives comprehensive information on the strategies of the leading companies in the sector, along with a comprehensive study of the different market segments and regions.


The Global Market Research Information Report Was Prepared with the help of the following tips:

Reasons to Purchase this report:

Aircraft Landing Gear Repair and Overhaul Market Size Expected to Grow at a CAGR over 4.76% from ...